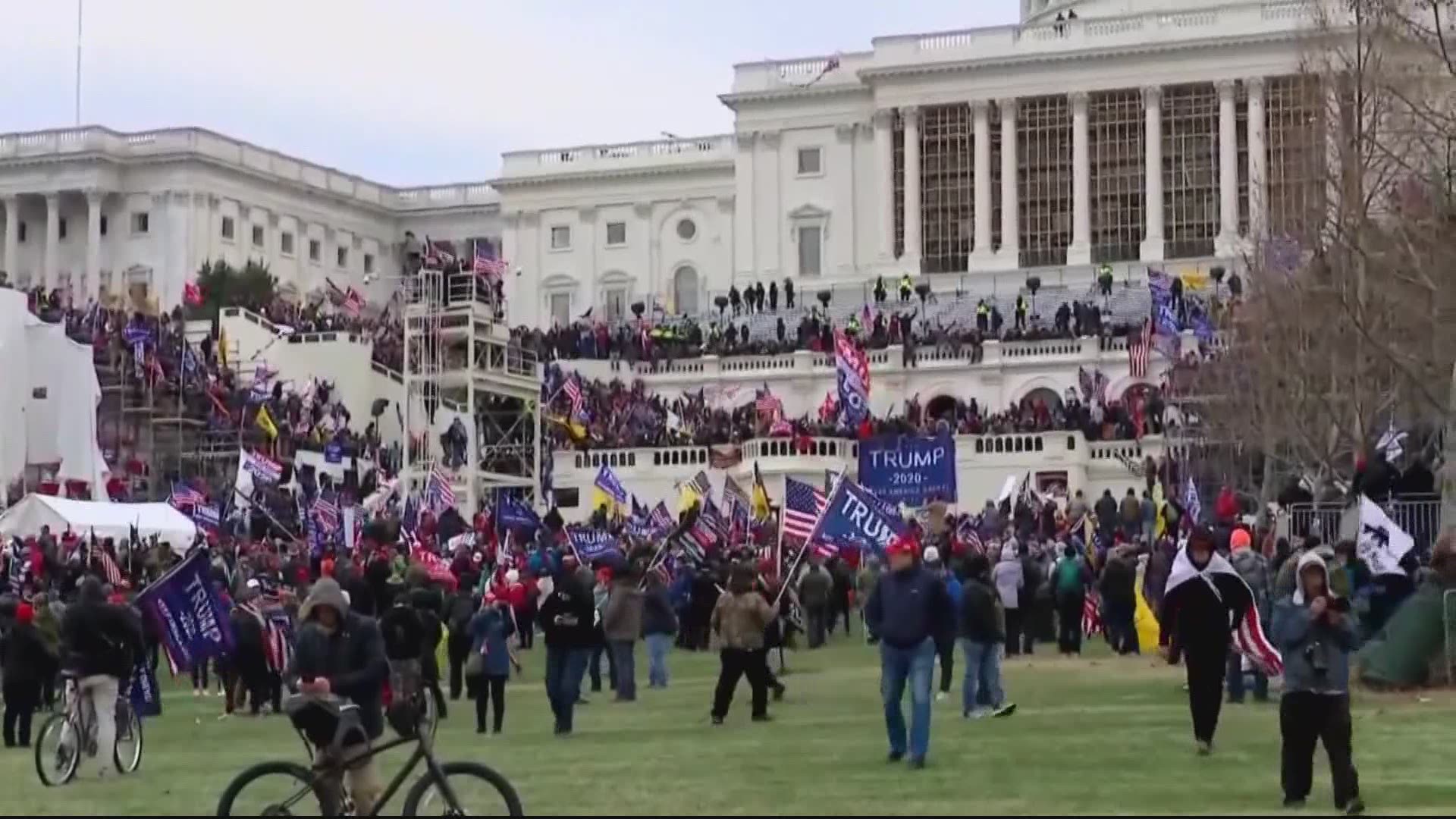 WASHINGTON — In a new report, the U.S. Capitol Police inspector general found the USCP had several "deficiencies" and failed to understand intelligence that warned how protesters could become "violent" and target Congress on Jan. 6.

Since the Capitol insurrection, USCP Inspector General Michael Bolton conducted a review of the department, interviewed officials and analyzed documents related to planning and intelligence. The report, which has not been publicly released, found failure to disseminate relevant information obtained from outside sources and lack of consensus on the interpretation of threat analyses.

"USCP did not prepare a comprehensive, department-wide operation plan for demonstrations and lacked adequate guidance," the report read.

The night prior to former President Donald Trump's rally in the Ellipse, the department received a memo from the FBI Norfolk division that warned of additional details and a potential threat of violence, but the report said it was not properly communicated. On the eve of the rally, an intelligence officer with the department pulled the memo from the FBI system and emailed it internally, the IG said.

The report points out the need for personnel to better understand and interpret intelligence assessments and to coordinate with department officials with intelligence analysis and dissemination responsibilities.

An official responsible for creating one of the operational plans "admitted it was most likely an error on their part that the threat analysis in the plan was not updated." The plan had outdated information saying there were "no specific know threats related to the Joint Session of Congress-Electoral College Vote Certification."

An assessment on Jan. 3 indicated "threats of disruptive actions or violence cannot be ruled out" and a "sense of desperation and disappointment may lead to more of an incentive to become violent" with Congress being the target. However, the report said some department officials never saw the threat analysis.

The department had also "disseminated conflicting intelligence" the days prior to Jan. 6, according to the IG. Bolton reported that a daily intelligence lists the upcoming event "Million MAGA March/US Capitol" for Jan. 6 as having improbable levels of  "acts of civil disobedience and arrests based on current intelligence." However, an internal report days earlier said there were concerns of "armed" protesters who "may be inclined to become violent."

"The department was not ignorant of intelligence indicating an attack of the size and scale we encountered on the 6th," acting Capitol Police Chief Yogananda Pittman said in her testimony in front of Congress on February. "Although we knew the likelihood by violence of extremists, no credible threat indicated that tens of thousands would attack the U.S. Capitol."

Bolton said the department "lacked guidance" and had "inconsistencies" when it comes to planning.

Two lawmakers have pushed for the U.S. Capitol Police Board to release the final and interim reports by the IG to the public. In a letter sent on Monday, House Legislative Branch Appropriations Subcommittee Chairman Tim Ryan, D-Ohio, and ranking member Jaime Herrera Buetler, R-Washington, said, "In the wake of the January 6th attack that shook the confidence of so many Americans, taking a more open and transparent approach isn’t just the right thing to do, it will be the most effective as we seek to restore citizens’ confidence that the heart of America’s government is secure."

He listed eight recommendations including requiring its civilian employees to obtain security clearance.

WUSA9 reached out to USCP for comment, and they sent this statement:

The USCP greatly values its relationship with the USCP Office of Inspector General, as the OIG regularly provides analysis and recommendations that strengthen Department operations. However, the OIG operates independently from the Department, as it should, and reports directly to the Capitol Police Board. Therefore, the Department is not authorized to release any of the OIG’s reports.

Before January 6, the Department made significant improvements to its security posture. It increased the size and coverage of Dignitary Protection details for Members, deployed counter surveillance agents into the crowd, increased the number of Civil Disturbance Unit (CDU) platoons, deployed SWAT teams, enlarged the physical security perimeter, and added additional officers throughout the Capitol Complex, among other changes.

The Department also sought assistance from other entities. On January 4 and 5, former USCP Chief of Police Steven Sund requested that the Capitol Police Board declare a state of emergency, which would authorize the Department to request National Guard support. The former House and Senate Sergeants at Arms denied those requests, but encouraged Chief Sund to contact the DC National Guard to determine how many Guardsman could be sent to the Capitol on short notice, which he did.

The Department’s preparations were based on the information it gathered from its law enforcement partners within the intelligence community, none of which indicated that a mass insurrection of this scale would occur. Even the intelligence from the FBI’s Norfolk office was self-identified as raw and not to be acted upon.

The USCP acknowledges it had internal challenges including communication issues and inadequate training, which it is correcting.

The Department has also taken significant steps to facilitate the flow of intelligence to all of its sworn personnel, its law enforcement partners and stakeholders.

Despite its challenges, the Department strongly believes that, short of excessive use of deadly force, nothing within its arsenal on January 6 would have stopped the violent insurrectionists that descended on the U.S. Capitol. Going forward, in additional to enhanced physical infrastructure, the Department believes that external support will be necessary for certain events.

As it pertains to public disclosure, USCP leadership is committed to improving communication, while striking the balance between transparency, accountability, and protecting law enforcement sensitive information.

The Department is proud of its officers, including the late Brian Sicknick and Howard Liebengood, who helped carryout USCP’s vital mission to protect Congress and the Democratic Process.