"There's all this talk about 'thank you for your service.' Well, let's thank them by not putting a lot of extra B.S. on their plate." 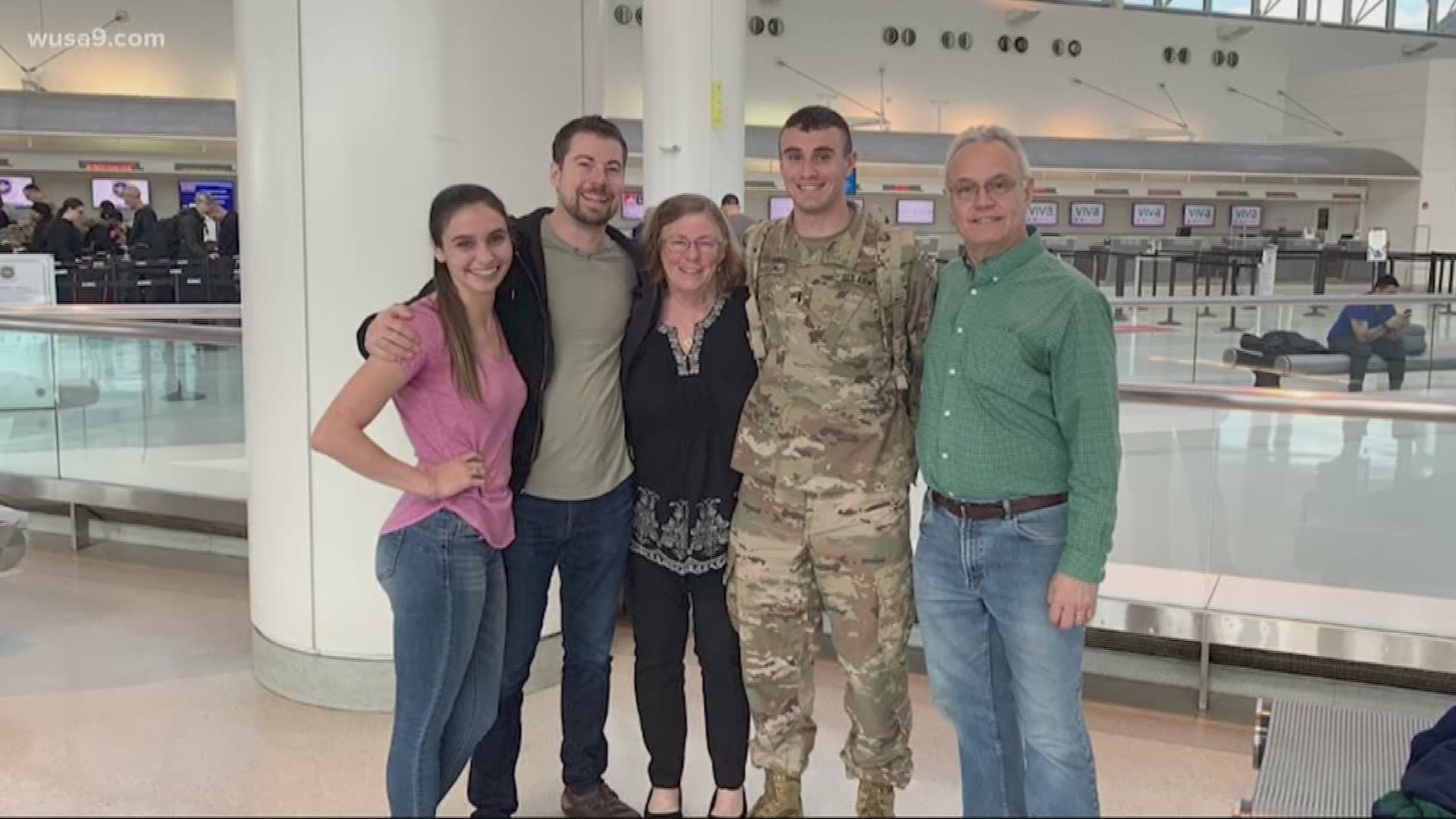 CHEVY CHASE, Md. — A military mom is pleading for change. She said her son is deployed to a war-zone in the Middle East, but the state of Maryland expected him to worry about his vehicle emissions test.

Madelaine Waltjen Shedlick is now hoping Maryland lawmakers will create a new waiver. That way, Madelaine says, the men and women in uniform can focus on serving their country while they're deployed, instead of getting the cars they left back home checked for emissions.

Madelaine teared up as she scrolled through photos in her phone. They show a snapshot of life as a military family and the fleeting moments together before deployments.

"That's our family at the terminal for the military charter," Madelaine said. "That's the last time my family was together. We had a lovely family dinner before he got on the plane. I knew what it meant. I didn't know, I don't know even now, is he coming home? I hope so."

During the constant worry, Madelaine tries to focus on what's important when it comes to her son, Army 1LT Tommy Shedlick. It doesn't always work out that way.

"I can't even imagine what it would be like to lose him, and emissions testing? Really, are we kidding?" Madelaine said.

Here’s the back story behind Madelaine's obvious frustration -- Her son is deployed to the Middle East. His Army unit is out of Texas, which is where he left his truck. It's still registered in his home state of Maryland. Servicemembers are legally allowed to do that. Maryland MVA said the pickup was due for emissions testing, and Madelaine got the notice.

"I kept looking like all over the place for the military exemption and there was none," she said.

So, she called MVA to try to keep the small stuff off her son's plate.

Credit: Madelaine Waltjen Shedlick
1LT Tommy Shedlick with his truck, which is registered in Maryland.

"They didn't know what to do with me," Madelaine said. "She finally came up with two solutions for me. One was I could fly to Texas, take his truck out of the locked military lot at Fort Bliss, drive it to Maryland and do the emissions testing myself ... She said there's only one other option and that is to have Tommy send his military orders and he also needed a letter from his commanding officer, who is in another country in the Middle East."

Madelaine was shocked. After some work, she eventually got a letter from the MVA with an extension and an apology. Now, she's thinking about other military families.

"It's so insensitive and it's so frustrating and I don't know why -- why is the military always thought of last?" she asked. "Did they never consider deployed soldiers? For heaven's sake we can treat them better than that. We're better than that."

"Unfortunately, the person answering the phones didn't give her all the options," Nizer described. "We had some new folks training."

She also called Madelaine to apologize for what happened.

"Occasionally, we might not get it exactly right, but again, that's an opportunity to see how we can do things a little better," Nizer explained. "I'm grateful for Mrs. Shedlick because, frankly, she has paved the way for other military families."

Madelaine paved the way with changes the agency just put in place.

"We've added a question under our vehicle emissions information specifically for military members," Nizer listed. "So, the question is 'if I'm located either out of state or out of country and I need to get my VEIP testing, what do I do?' We're adding the states that also do VEIP testing, so we can accept test results from those states. In addition, we're retraining staff so that they're clear on how they should be providing this information."

But the Shedlicks are hoping officials will go even further. Right now, there are emissions waivers for senior citizens and disabled citizens. An exemption for military servicemembers doesn't exist. We asked Nizer if she would support this kind of waiver, if it was proposed in the state legislature.

"Certainly, it's worth looking at," she responded. "We always look for new opportunities."

There's also a concern the change-over to REAL IDs could be an issue for military. Nizer suggested servicemembers go to the MVA online tool to look up their driver's licenses and see what's needed.

Madelaine wants state lawmakers to see their story and create that opportunity with a new exemption.

"There's all this talk, you know, about 'thank you for your service,'" Madelaine added. "Well, let's thank them by not putting a lot of extra BS on their plate."