The president of the Maryland Restaurant Association wants all the state's jurisdictions to get on the same page. 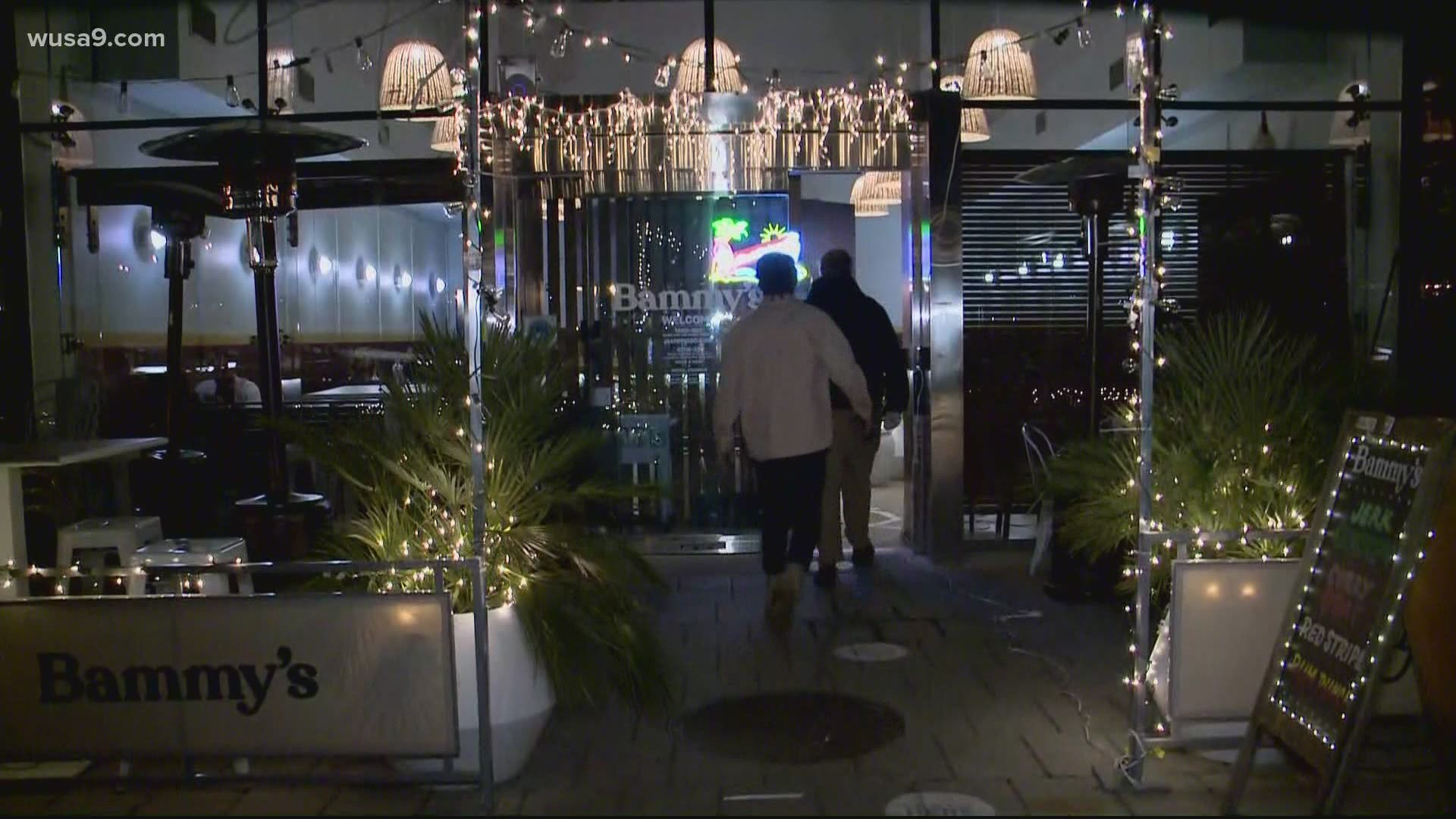 MONTGOMERY COUNTY, Md. — The Maryland Restaurant Association projects 40% of all the state’s restaurants have closed for good since the COVID-19 pandemic started.

The organization argues businesses need to be open with fewer restrictions, and jurisdictions across the state need to be on the same page for the remaining restaurants to survive.

Restaurants in Montgomery County are currently on an island.

Dining indoors at 50% capacity is approved on the state level, but Montgomery County is the only jurisdiction blocking indoor dining altogether.

Gonzalez is the general manager at Grill Marx in Olney.

“We’ve actually been losing money every week since we shut down indoor dining,” she said.

Gonzalez told WUSA9 their situation has gotten so bad that the business does not have adequate funds for payroll or ordering additional food.

She was forced to post on Facebook the restaurant would be closing its doors until indoor dining was allowed again in Montgomery County.

“It was not a good feeling to sit there and have to decide that,” Gonzalez recalled.

The Montgomery County council is charged with making a decision on Tuesday of whether or not to lift the indoor dining ban.

The order would include limitations, such as one-hour seating times, a 25% indoor dining seating capacity limit, and no alcohol after 10:00 p.m.

“All of the metrics that they claim to be looking at in making these decisions continue to decline,” Marshall Weston said in an interview with WUSA9 last week. “Other jurisdictions have continued to reopen all around them. Yet they still say that it’s not good enough. We strongly disagree and we need to get these employees back to work.”

Weston is the president of the Maryland Restaurant Association.

He would be glad to see Montgomery County indoor dining open in some capacity but wants all the state’s jurisdictions to get on the same page.

“Trying to operate at a 25% indoor capacity basically only allows the business owner to bring back some employees, but the reality is they are not generating enough income to make ends meet,” Weston said.

“25% for a lot of us small businesses is saying you can only seat 6 people,” Chef JR Robinson said.

Chef Robinson is the owner of Kitchen Cray Café in Lanham.

He says it is tough to make money at 25% capacity which is the current restriction for indoor dining in Prince George’s County.

“Even though we opened 25%, we have to pay 100% of the bills,” Chef Robinson said. “People are getting threatened with eviction notices, cable, gas – they’re threatening to cut our stuff off but there is nothing we can do.”

A spokesperson for the Prince George’s County Health Department responded to some of Chef Robinson’s concerns in a statement:

Indoor dining presents a unique risk for transmission. Eating and drinking require people to lower or remove their masks, exposing their nose and mouth for longer periods of time. Contact tracing interviews show indoor restaurant dining has been among the top activities COVID-positive individuals had reported doing shortly before testing positive.

That’s why we need to ease our way through loosening indoor dining restrictions, while also understanding how difficult the pandemic has been on restaurants. After the December holiday cases increase, the County has seen encouraging, steady declines in key metrics, particularly the positivity rate being below 10%, at 7.1%. The County is keeping a close watch over these numbers, and will make necessary restriction adjustments going forward.

RELATED: Montgomery County may join the rest of Maryland in lifting its ban on indoor dining