The county health department said it has addressed some glitches that have come up since the dashboard was launched Friday. 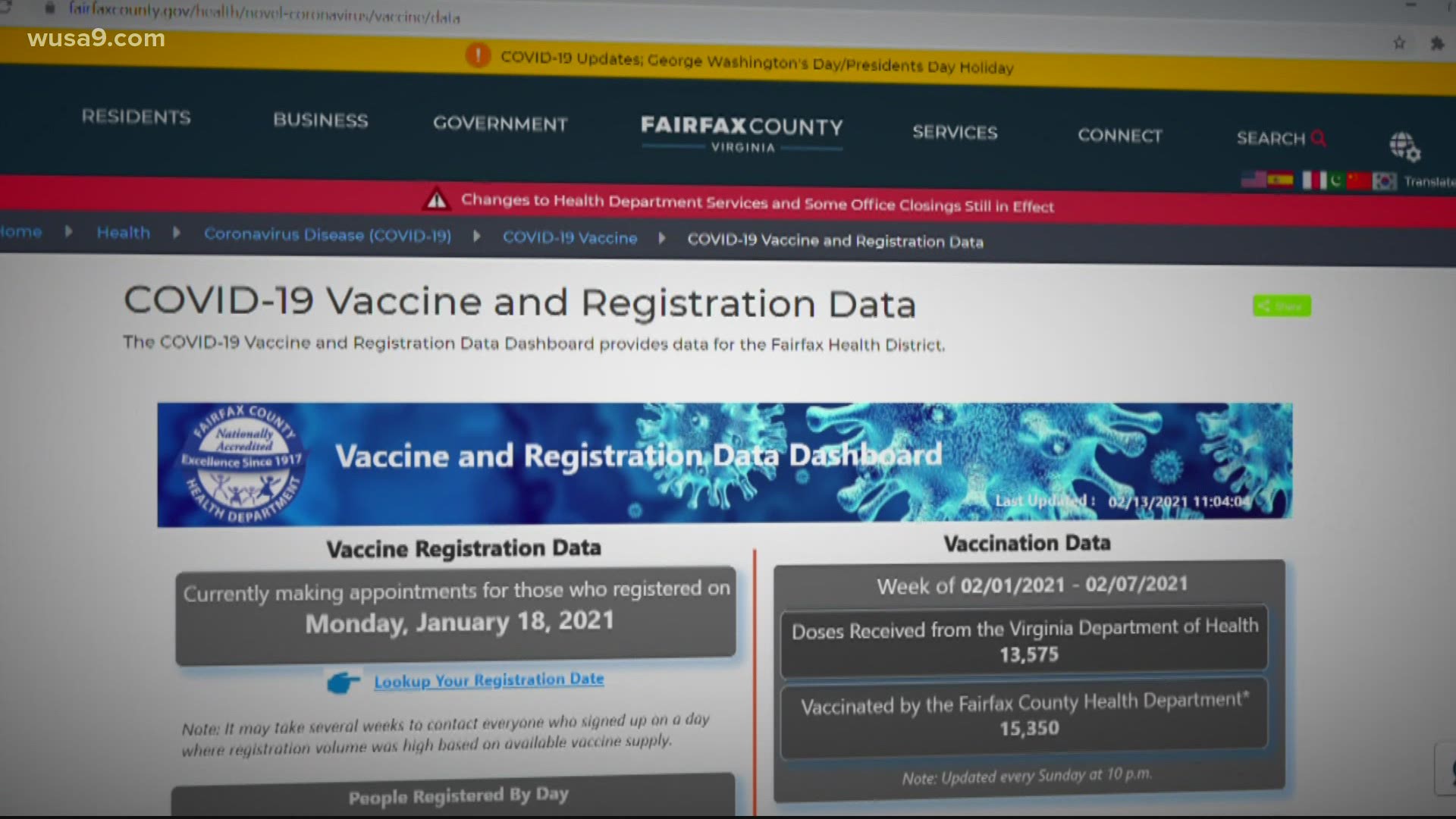 FAIRFAX, Va. — Fairfax County has decided not to join the state's vaccine registration system launching Tuesday, prompting some neighbors to express concern over the problems they're still facing.

“I was very excited that they were going to have a registration system online thinking it would be easy and efficient, and in reality it wasn’t any of those things," Chrissy Seminaro, who lives in Fairfax County said.

Others shared a similar sentiment on the county health department's page over the weekend.

Fairfax County Board of Supervisors, Chair Jeff McKay, said Saturday that the county decided to stick with their own system since it had invested so many resources into it already. He wants to see how the state's rollout goes before deciding to make the transition.

“My main goal here is to not further confuse people who are already confused and anxious," McKay said.

Hey friends! As many of you know, VA is launching the centralized vaccine registration system tomorrow...and everyone's joining but Fairfax County.

I want to hear from those of you in FFX County -- what's been your experience trying to get an apt? @wusa9 https://t.co/h2s3Nm95W2

Seminaro and her neighbor, Tracy Berman-Kagan, who both registered on Jan. 18, said they've certainly been confused and anxious the last few weeks.

Seminaro said she had to sign up twice when she didn't receive a registration confirmation, even though the site said "thanks for your submission."

“If we had actually registered, which we thought we did, we would have received our vaccination or have received an appointment for a vaccination," she said. "So I’m feeling very frustrated that their system failure is the reason I’m not in that place right now.”

The Fairfax County Health Department said it was not aware of that particular glitch.

Berman-Kagan said even though she signed up in January when she checked the county's new dashboard Friday, it told her she was ineligible because of her age or ZIP code. The health department said they did receive a small number of reports of this issue, but they've been working to resolve it, and those affected will receive a new link for an appointment (if they haven't already).

Berman-Kagan confirms she is now in the queue.

“I think a lot of this is angst about the uncertainty of all of it and just kind of worrying that you’re going to somehow get passed over, and the email is going to get sent to a spam folder and you’re not going to see it, and that’s going to be your last opportunity for it," she said.

The county health department said it encountered another glitch it has corrected, writing:

"When phase 1b updated on Jan 18 to include those 65 and over, more than 41,000 people registered on that day alone. Through a database review, the IT department found a few hundred registrations that were received that day but not correctly correlating to the Jan 18 date. Those records were corrected on Saturday and manually placed back in to now correctly reflect the date the registration was received (Jan 18)."

Their biggest frustration with the dashboard is that it doesn't show specifically where people fall in line — only that the health department is starting to schedule some of the 41,000 people who signed up on Jan. 18.

A spokesperson for the health department said the system is not set up to show that type of information. She said it pulls names that meet criteria based on the 50/50 split they have to maintain between people 65+ and everyone else who qualifies based on their job or underlying medical conditions.

For the rest of the state, WUSA9 asked the Virginia Department of Health to breakdown how the new centralized system will work.

A spokesperson sent the following statement:

Many neighbors have shared that they are happy with Fairfax County's system and are happy with the health department's responsiveness, like Carol Smith, who signed up a couple of weeks ago. She said the registration process was easy, and she supports the county sticking to its own system.

“I’m glad we just didn’t jump on board because there was an alternative there," Smith said. "It’s better to stick with what’s working and fix the bugs than to start over.”

The county health department said it's important to remember that, as the largest county in Virginia, the population numbers at about 1.2 million people. Still, a spokesperson said they're only receiving about 13,000 doses a week, so she asks for patience.