One group of LCPS parents says hybrid learning isn't enough; they want their kids back in school full time. 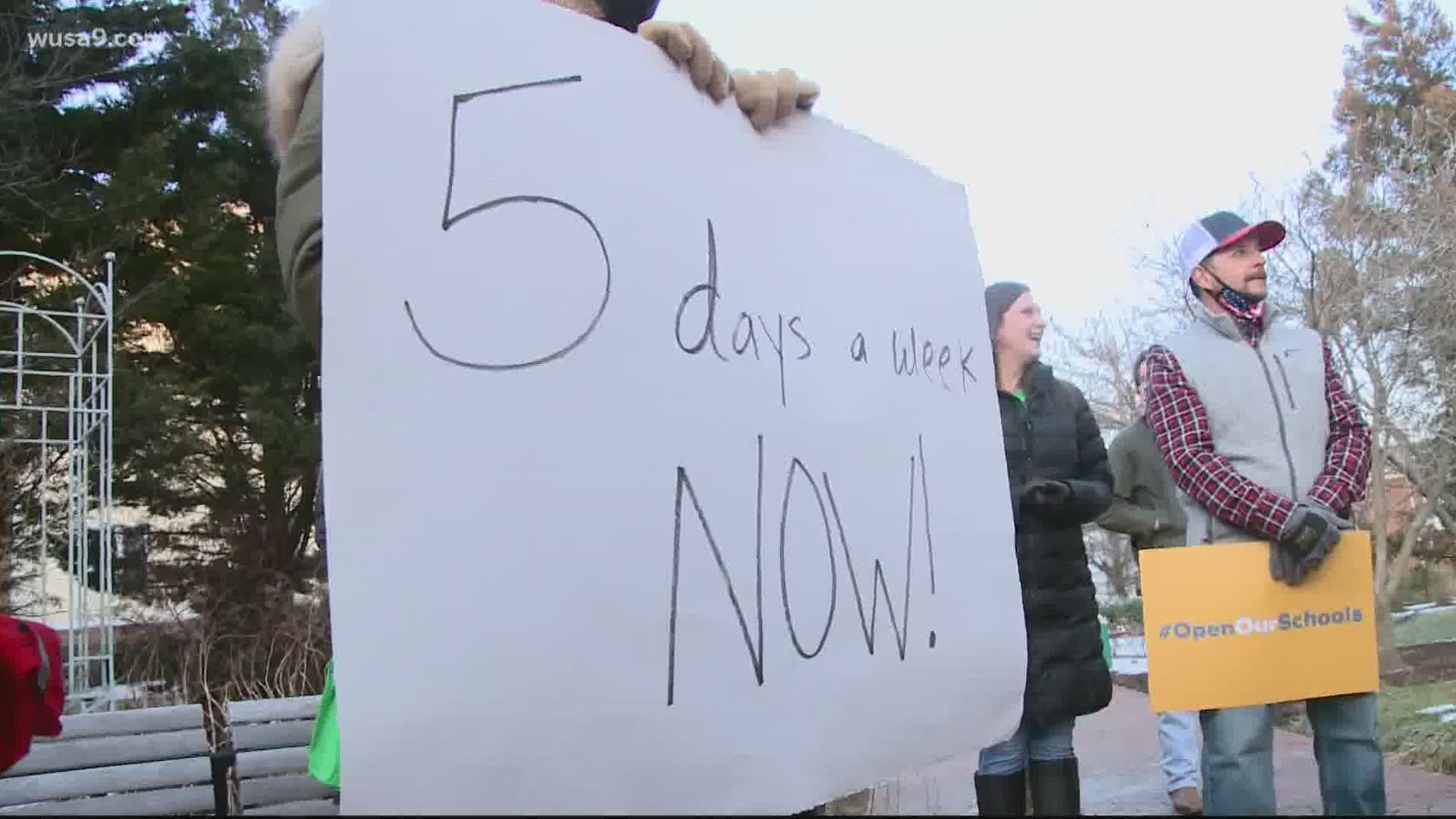 LEESBURG, Va. — A week after the Loudoun County School Board voted to restart hybrid learning, one group of parents rallied outside the Board of Supervisors meeting to get kids back in class five days a week.

“Hybrid learning is a good first step, but it's got to be five days a week," parent of two daughters, Darris Hess said. "We are almost 360 days into this, and they’ve had time to plan for it.”

He and Geary Higgins, who also turned up for Monday evening's rally, said if there's a will there's a way.

“I mean I understand the concerns, but I also understand the collateral damage of kids not being in school and the needs that they have, so we’re trying to get the schools open, get Loudoun county to get a plan to get them open, and do it as soon as possible," Higgins said.

He said he's watched in frustration as his grandchildren have struggled with virtual learning throughout the pandemic.

The LCPS School Board decided to start bringing back some students two days a week for hybrid learning, starting February 16.

Credit: Kyle Watkins
A group of LCPS parents rallied outside of the Board of Supervisors meeting Monday night to get kids back in the classroom five days a week.

In November, LCPS conducted a survey of parents, asking them if they wanted to return to hybrid or distance learning for the second semester. Results the school system published showed 31% of parents chose hybrid, 59% chose distance, and 10% did not respond.

But of those 10% -- 16% of Black/African American families didn't respond and 19% of Hispanic families compared to 8% of white or Asian families.

Credit: LCPS
LCPS released data from a parent survey on return to learning conducted in November. Here's the response breakdown by ethnicity.

Some parents, like Bonnie Harper, have mixed feelings about the return to school. She has two students in the LCPS system, one of who will be going back with the return to hybrid learning.

“It’s a little bit hard because we don’t want our kids to be the guinea pigs," Harper said. "I just haven’t seen the evidence saying that schools are safe.”

The Loudoun Education Association president said she would like all staff to be vaccinated before going back. As of Friday, LCPS said 10,500 of its 12,382 employees have received their first doses.

LEA president Sandy Sullivan said her concerns extend beyond the vaccine -- to proper mitigation procedures, which she said aren't yet sufficient.

“Bringing all these employees and students back in the building, we need time to see how that is going and make sure those mitigation strategies are in place, because if they’re not, we’re asking for trouble. We’re asking for illness and loss of life," Sullivan said.

Still, she emphasized that she understands the struggle for parents and students. But, she’s hoping for more safety measures like larger schedule gaps to clean, and mandatory teacher checklists to assess how successful precautions like mask-wearing were each day.

LCPS said they've added more safety measures as they prepare for hybrid learning. The newest are installing student and staff sneeze guards at all desks…and thermal cameras at the most-used entrance to each school that can scan 45 people per second and identify who has a temperature above 100.4 degrees.

The school system said they will also require masks and social distancing.