The complaint says, instead, the students have received work packets sporadically -- with practically no help from teachers. 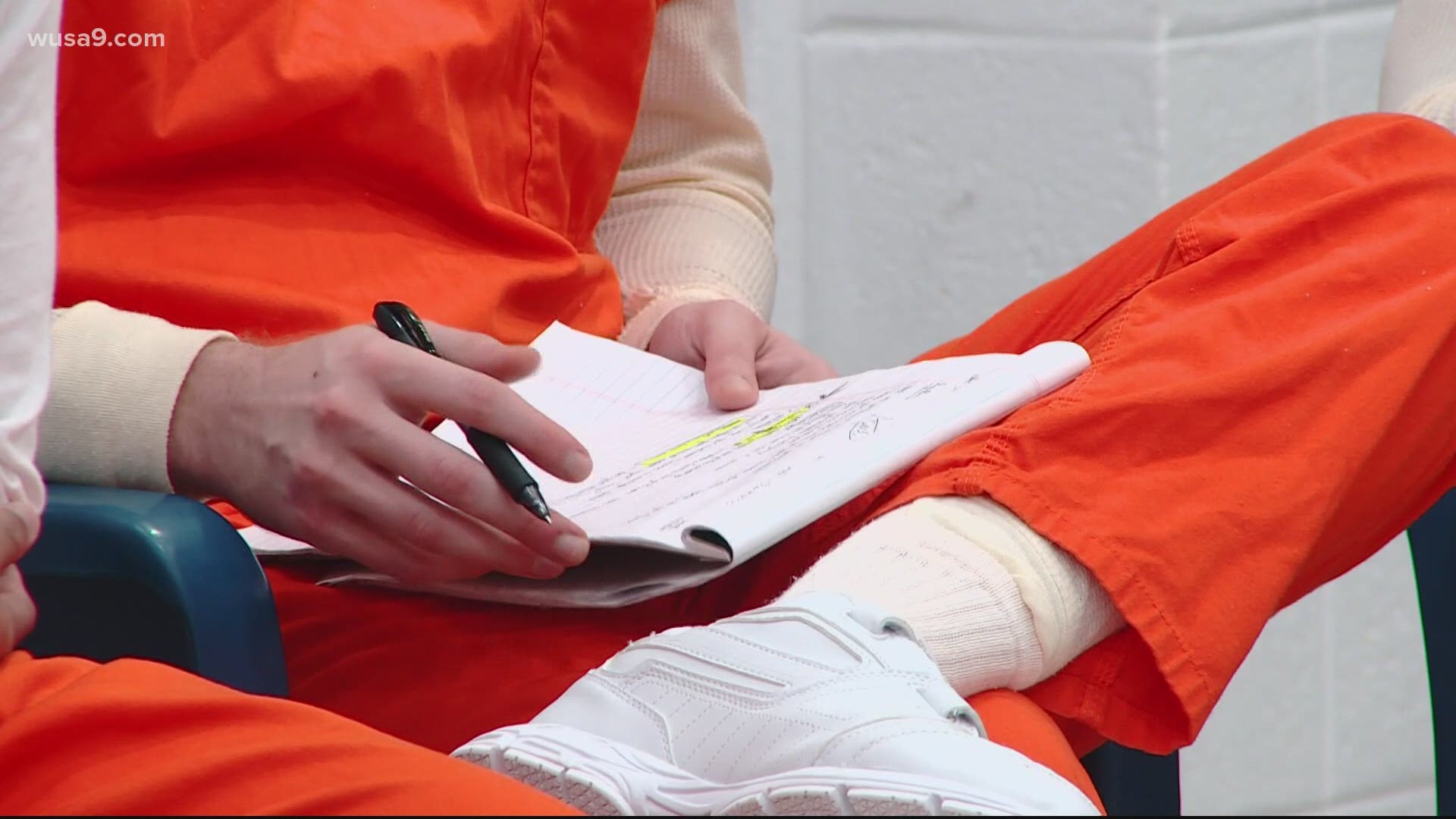 WASHINGTON — The pandemic has been tough for most students — but for those incarcerated in the DC jail complex, they've had to get through it without teachers or classes for a year, a new lawsuit alleges.

The Washington Lawyers’ Committee for Civil Rights and Urban Affairs, School Justice Project, and Terris Pravlik & Millian LLP jointly filed the suit against DC Public Schools, the Office of the State Superintendent of Education, and the District of Columbia on behalf of two specified students and 40+ others.

The students, using pseudonyms Charles H. and Israel F. for privacy reasons, are a 20-year-old 11th grader and 18-year-old 12th grader, respectively — both with multiple learning disabilities, according to the complaint.

The complaint says that they're part of a group of approximately 44 students enrolled in the Inspiring Youth Program, run by DCPS for students living in the DC jail.

When the pandemic hit in March 2020 and DCPS put a halt to in-person classes and then rolled out virtual learning for students in the community, lawyer Kaitlin Banner said that didn't happen at the DC jail.

Instead, Banner said they've received sporadic work packets that are supposed to take the place of their instruction and special education and related services needs.

"Obviously, those cannot take the place of interaction with teachers' live instruction, an opportunity for feedback about how students are doing," she said. "And so the young people that we represent, have been struggling with this lack of education for a really long time."

TONIGHT on @wusa9: A new lawsuit alleges that incarcerated students with disabilities in the DC jail haven't had classes or teachers in over a year.

The complaint alleges that the work packets, which are supposed to account for two week's worth of work, often only include enough questions for two hours. It also says DCPS does not drop them off consistently, with the Associate Director of DOC, Amy Lopez testifying in Charles H.'s administrative hearing that from March 23, 2020 until October 23, 2020, he only received 5 packets.

After the packets are collected, the students never see their assignments again and receive little to no feedback except for generalized progress reports or final grades at the end of each term, the complaint alleges.

“They're being treated like they’re a complete forgotten population, and it just isn't appropriate," Sarah Comeau with the School Justice Project said. "It's neglectful.”

Meanwhile, the DC jail has been under a COVID-safety-induced lockdown since April 2020, forcing inmates there to remain in their cells 23 hours a day.

The complaint says students have complained that they cannot focus on their work with the noise in surrounding cells, and those who receive the packets on tablets provided by the jail struggle to get internet access.

Banner said the students have pursued administrative remedies and her team has tried to work out a solution with DCPS and OSSE, but they haven't taken any action.

Comeau said Israel F. was on track to graduate with only 6.5 credits left, but this lack of support has continued to push back that date.

"He's had that number of courses remaining for over a year now, and just hasn't had the opportunity to, to access education," she said.

And if they get transferred into the Federal Bureau of Prisons system, Comeau said they will lose access to this educational opportunity — and then, may never receive their high school diplomas.

RELATED: 'We are being objectified' | Police called to boy's bus after he kept removing mask, mom says

The team of lawyers' goal is to figure out a system for the District to provide appropriate education, be it in person or virtual.

Banner said they've filed an injunction, in the hopes that the judge will force the city and DCPS to take immediate action.

One student, Israel F., wrote, “I am fighting for this case so people who are in my predicament can have a chance to succeed. I want to have a better education for myself and others.”

"They are absolutely incredible people," lawyer Stephanie Madison said. "And I think they're, you know, fighting for not only their right to receive education, but this entire student population."

“DCPS is committed to providing every student, including those receiving special education services, with a high-quality education that improves their academic outcomes and prepares them for lifelong success. While we cannot comment on pending litigation, we will actively work with the Office of the Attorney General to address the lawsuit.”