Duncan died from injuries sustained in the shooting while sitting in his father’s car on December 2. 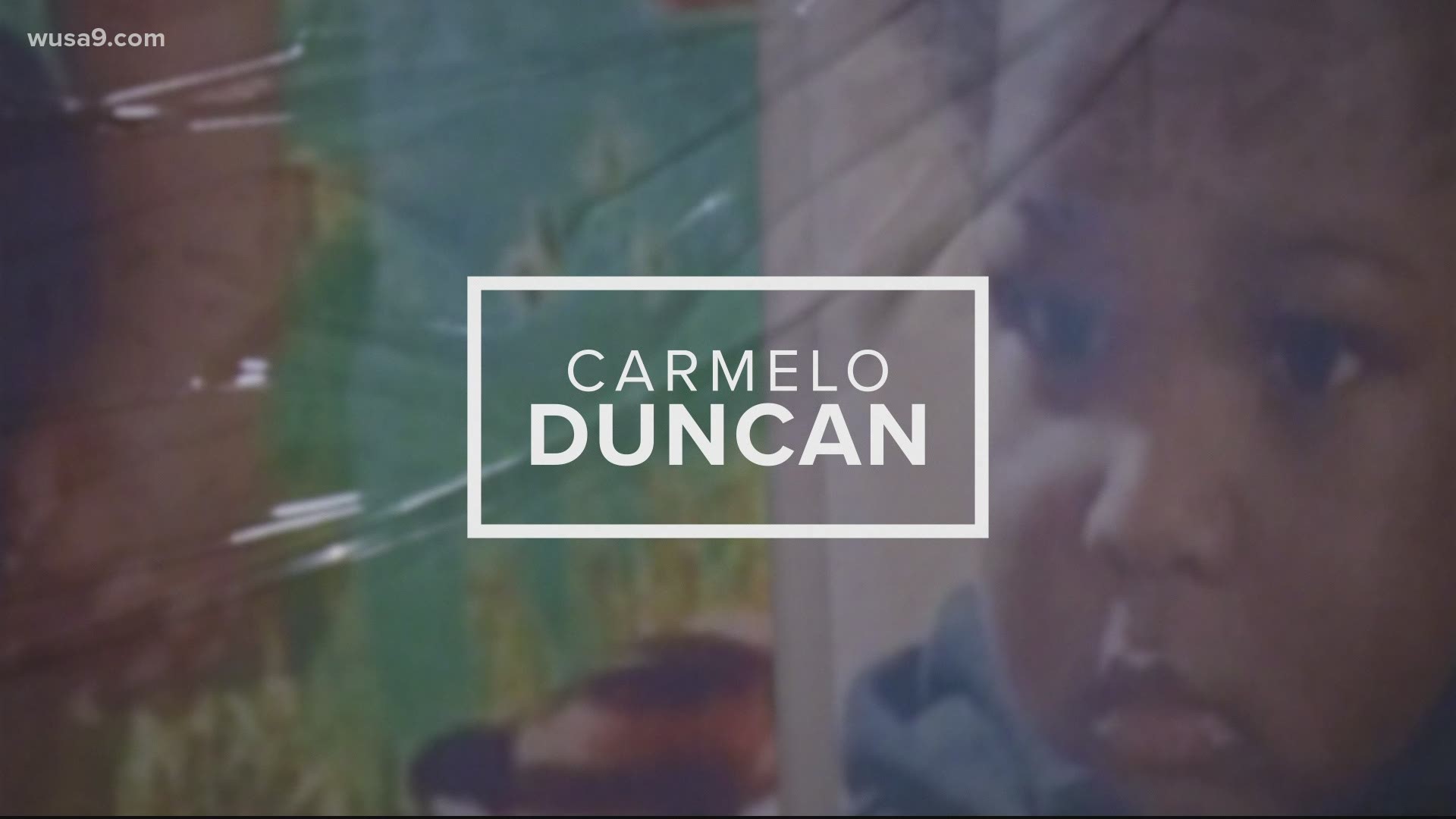 WASHINGTON — Many DC residents are still in mourning nearly a week after 15-month-old Carmelo Duncan was shot and killed in a Southeast neighborhood.

On Wednesday night, the heartbreak was seen firsthand during the "Walk For Carmelo," which occurred near the site where Duncan died a week ago along the 5700 block of Southern Avenue Southeast.

A moment of silence was held at 8:24 p.m., which an organizer said represented the 15-month-old's birthday on August 24th.

Duncan died from injuries sustained in the shooting while sitting in his father’s car on December 2. DC Police Chief Peter Newsham later said he believed the shooting may have been targeted.

Authorities say no suspects have been arrested in connection to the shooting.

*VIDEO*: The #WalkForCarmelo has come to the intersection of Southern/Central Ave SE.

Friends, family members, and neighbors grieving and also calling for anyone w/ info on what happened to come forward. @wusa9 pic.twitter.com/iWeRoZo037

Supporters who gathered Wednesday to remember Duncan voiced both sadness over the tragedy and frustration that whoever committed the crime still hadn't been caught.

"We got a one-year-old baby who lost his life for nothing," said DJ "Dirty Rico," who organized Wednesday's gathering. "He hadn’t had a chance to even learn how to tie his shoes yet.”

Several people who attended the march and moment of silence for Duncan highlighted the need to address gun violence, with homicide numbers seeing a 19% increase in the district compared to the same time last year.

"When they put those weapons in their hand, they take full responsibility for whoever is the victim," said one man who lives nearby the shooting scene. "We can’t afford to lose another child. No parent can even begin to describe what it feels like to get a call like that.”

"His life was taken away from reckless people because they just want to shoot," voiced another neighbor.

More people showing up for the #WalkForCarmelo along Southern Ave SE.

Some praying at the site of where the 15 month old boy was shot and killed last week. The people I’ve spoken to have expressed heartbreak and frustration that whoever did this hasn’t been caught. @wusa9 pic.twitter.com/GQiPy1jR72

For the organizers and people who attended Wednesday's event, they hoped to keep shining a light on Carmelo Duncan's death in hopes others would come forward with information on what happened.

"If you know something, bring them to justice," said a neighbor.

"You know where you were," said Rico. "You know what you did. I bet it was an accident. Say that. Turn yourself in.”

Last Saturday, hundreds of people gathered at the corner of Southern and Central avenues to remember Carmelo and bring attention to his case.

Southeast DC resident Kevin Dunmore held a candlelight vigil next to a memorial for Carmelo set up at a light pole.

Help @FBIWFO, @ATFWashington, and the @DCPoliceDept identify the individual(s) who shot and killed 1-year-old Carmelo Duncan on December 2 in Washington, D.C. Call 202-278-2000 or visit https://t.co/iL7sD5efWD if you have a tip. #SeekingInfoSaturday https://t.co/M4ZBw4SSw8 pic.twitter.com/hCuyS7ttSd

"It makes me feel really bad, because the stuff that's going on, this shouldn't be going on in no community,” Dunmore said.

Carmelo’s family members requested privacy from the press as they continue to mourn his passing.

"Sometimes, you just feel so alone when [this] stuff happens,” she said. “We just want to let them know that we're here and we understand."

The Metropolitan Police Department asks that anyone with tips regarding the case contact them.

Currently, there is a $60,000 reward from authorities for information that could lead to an arrest.

#WalkForCarmelo now holding a moment of silence for 15 month old Carmelo Duncan. 8:24pm in honor of his 8/24 birthday. @wusa9 pic.twitter.com/wMwE2CgEFx