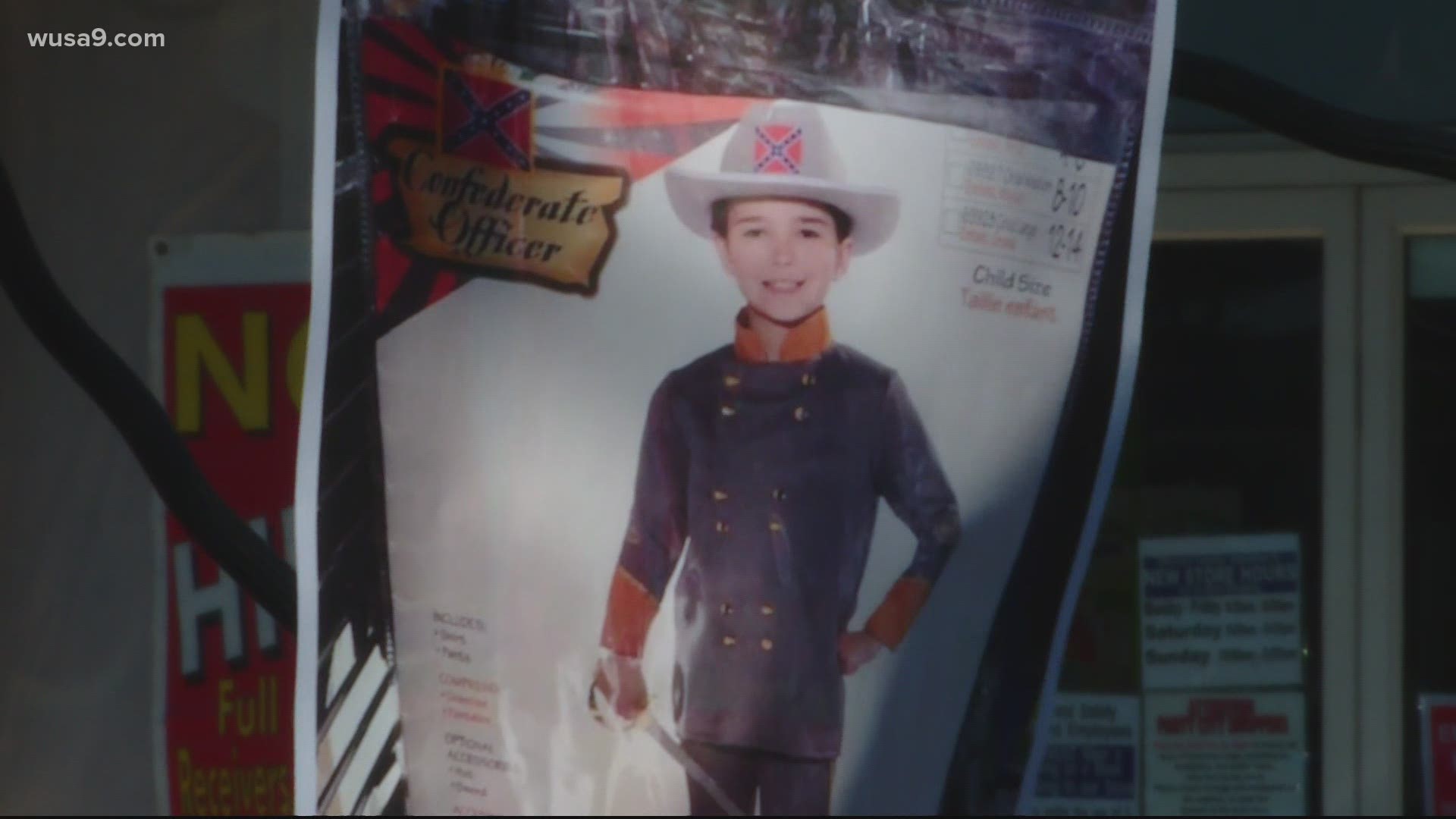 Caroline Brasler goes all out for Halloween with her daughters Meredith, 12, and Olivia, 10.

On the way back from gymnastics practice Sunday, she stopped at the Bailey's Crossroads Party City looking for costumes. At the end of aisle two, she spotted something she could scarcely believe.

"The Confederate flag to me is a symbol of racism. To have that out there for a child to wear on Halloween sends so many horrible messages," she said.

Just below the pilgrim and Ulysses Grant costumes was one costume called "Confederate Officer." The other, with a bearded Confederate General Robert E. Lee. Both of their wide-brimmed hats were emblazoned with the Confederate flag, which has caused so much pain in the African American community.

"I'm the adoptive parent of two beautiful African American girls ... We discuss race, we respect race. And to see something like that just flies in the face of everything I try to teach them to be proud young women," said Brasler.

Party City is selling Confederate costumes in its Bailey’s Crossroads, Va store. Is this acceptable in this day and age? @wusa9 pic.twitter.com/6bIemqyvnq

Party City did respond to the issue with Confederate costumes at its franchise locations.

“At Party City, we do not tolerate racism or hatred of any kind, and we stand together in solidarity with our diverse colleagues, customers, and communities, said the company in a statement to WUSA9. "As the leader in Halloween with more than 60 million customers per year, Party City supplies a broad assortment of costumes, none of which are meant to be offensive in any way. The costume in question was sold at a franchise location and is not produced or sold in any Party City corporate-owned stores. We have reached out to our franchisees and other partners to remove it from all retail locations ASAP. We know that as a company, we can and must do better, and we’re taking immediate action. We value customer feedback and will continue to evaluate how to make each shopping experience fun and welcoming for all as we support efforts in inclusion internally, in our communities, and beyond."

The costumes don't come up on the Party City website, but they were still in at least the Bailey's Crossroads store as of Monday afternoon. They are also available from many other retailers nationally, including from Amazon.

Brasler said as she was taking a picture of the costumes, Olivia asked her what she was doing. "I said, 'That's a Confederate flag, that's a symbol of hate,' and she said, 'Oh, ma, really?' Then she took off for the candy aisle."

Brasler says even at their young ages, her daughters have already experienced racism. She just didn't think they'd find it at the party store.

She said after seeing the Confederate costumes, she refused to buy her daughters any costumes there. She'll get their vampire and zombie unicorn costumes elsewhere.

"No more princesses for them!" she said.