Thousands still without power, multiple trees down after two powerful storms in DMV 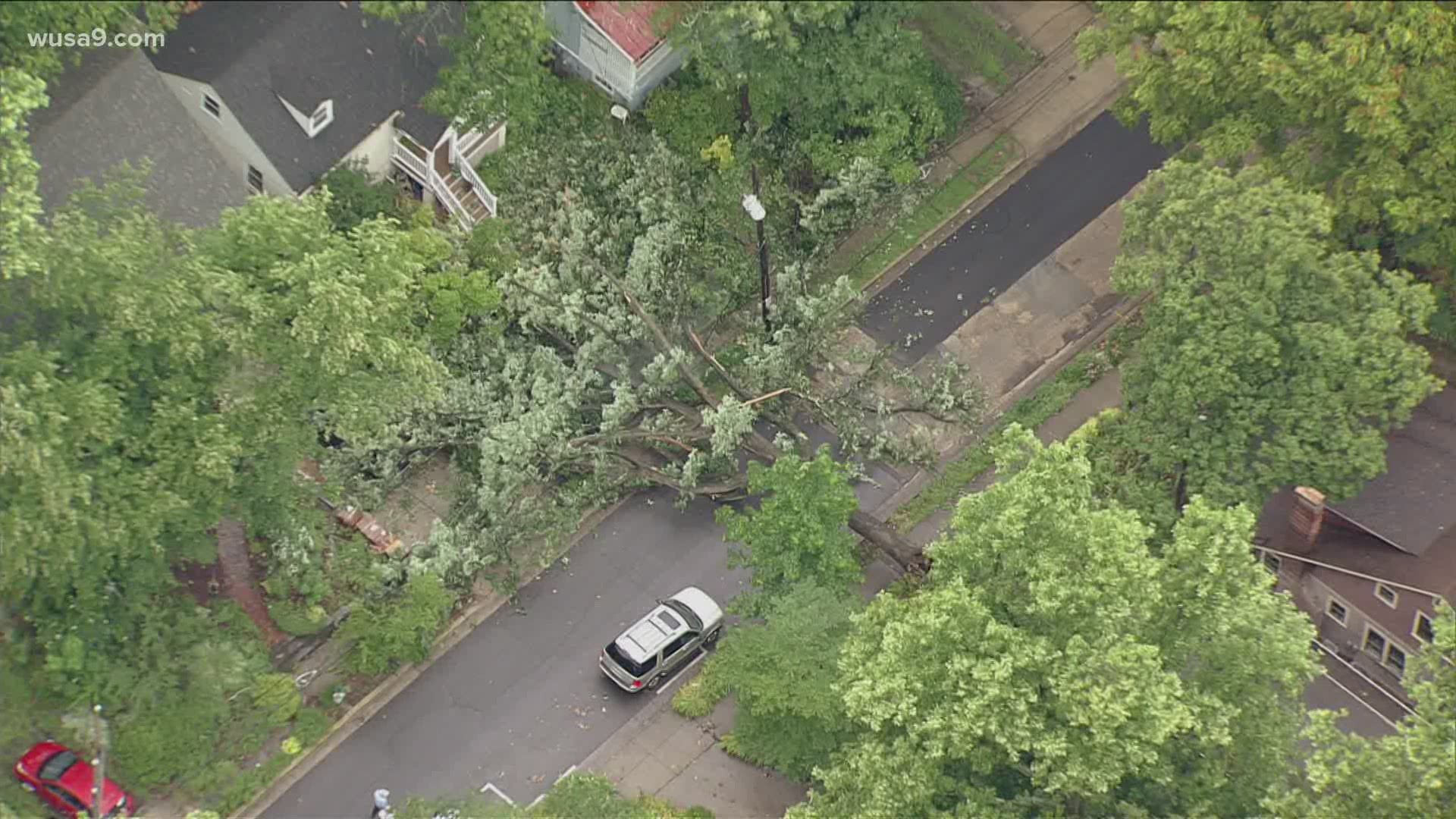 WASHINGTON — Over 20,000 people in the Washington Metro region were left without power as of Friday morning, following two brief, but powerful storms that rolled through the DMV Thursday evening. Several counties were under Flash Flood Warnings and Watches through 8 a.m. in a few areas south of D.C., and multiple homes in Maryland are dealing with downed trees.

As of Friday afternoon, the number of outages in the metro area dramatically decreased as electric crews mobilized into neighborhoods to fix powerlines following Thursday's storm. Compared to the thousands that were without power since Thursday, BGE has restored power to the majority of its customers in Prince George's County, with just 75 households left without power Friday; and an additional 63 Pepco customers in Prince George's County also dealing with power outages.

In Northern Virginia, more than 6,000 people have reported power outages Friday afternoon compared to the nearly 10,000 as of the morning, according to Dominion Energy.

In Arlington, a tree fell down on a house in the 4300 block of 16th Street leaving one person trapped inside. Fortunately, the person was able to be removed from the house and taken to a nearby hospital with non-life-threatening injuries.

“They ran inside and he didn’t make it.”
This woman, who didn’t want her identity revealed, explained what happened when a tree fell on her neighbor’s home and trapped him. Luckily, his injuries are non life threatening.

“It was terrifying because life is very precious.” @wusa9 https://t.co/39vBXDIcSR pic.twitter.com/wo86njQgGz

Thursday morning, a large tree came down and power lines are down causing multiple spot fires, including a house fire, in the area of Sherman Avenue and Maple Avenue in Takoma Park, according to Montgomery County fire officials. People were evacuated out of their homes after being trapped inside due to the downed tree and burning wires. PEPCO has been called to the scene. Officials said the small electrical fire knocked out and no one was injured. Several other homes near the incident have were also evacuated due to the large tree pulling down electrical wires.

In Chevy Chase, a large tree fell on a home on Meadow Lane, with no injuries. Several roads were blocked with downed trees in the area of Bradley Boulevard and Connecticut Avenue, and on East-West Highway, multiple people were displaced from Chevy Chase Crest condos after a large tree fell on the building. No one was injured, but five apartments were deemed "unsafe to occupy," according to Montgomery County Fire and Rescue spokesperson Pete Piringer.

Boiling Brook Parkway in Rockville was also blocked after a major tree fell across the road.

Crews on the scene tell us power could be out in this section of Chevy Chase until 2am after a power pole snaps and trees fall on wires on Bradley Ave at Connecticut Ave. #WUSA9Weather @wusa9 pic.twitter.com/TGoh9Pg5dW

Several trees have brought down fencing set up for Fourth of July festivities on 17th Street in Northwest D.C. and in front of the WWII Memorial. More downed trees were spotted near Korean War Memorial.

In Northeast, D.C., Minnesota Avenue was flooded, leaving cars parked on the street under more than a foot of water.

1 / 12
Courtesy Pete Piringer
A large tree is down on a house on Meadow Lane in Chevy Chase, but there are no injuries.

A building also collapsed on Kennedy Street, Northwest in D.C., leaving one construction worker trapped inside, with several others rescued but injured. There is no word yet on whether the collapse is in any way related to weather.