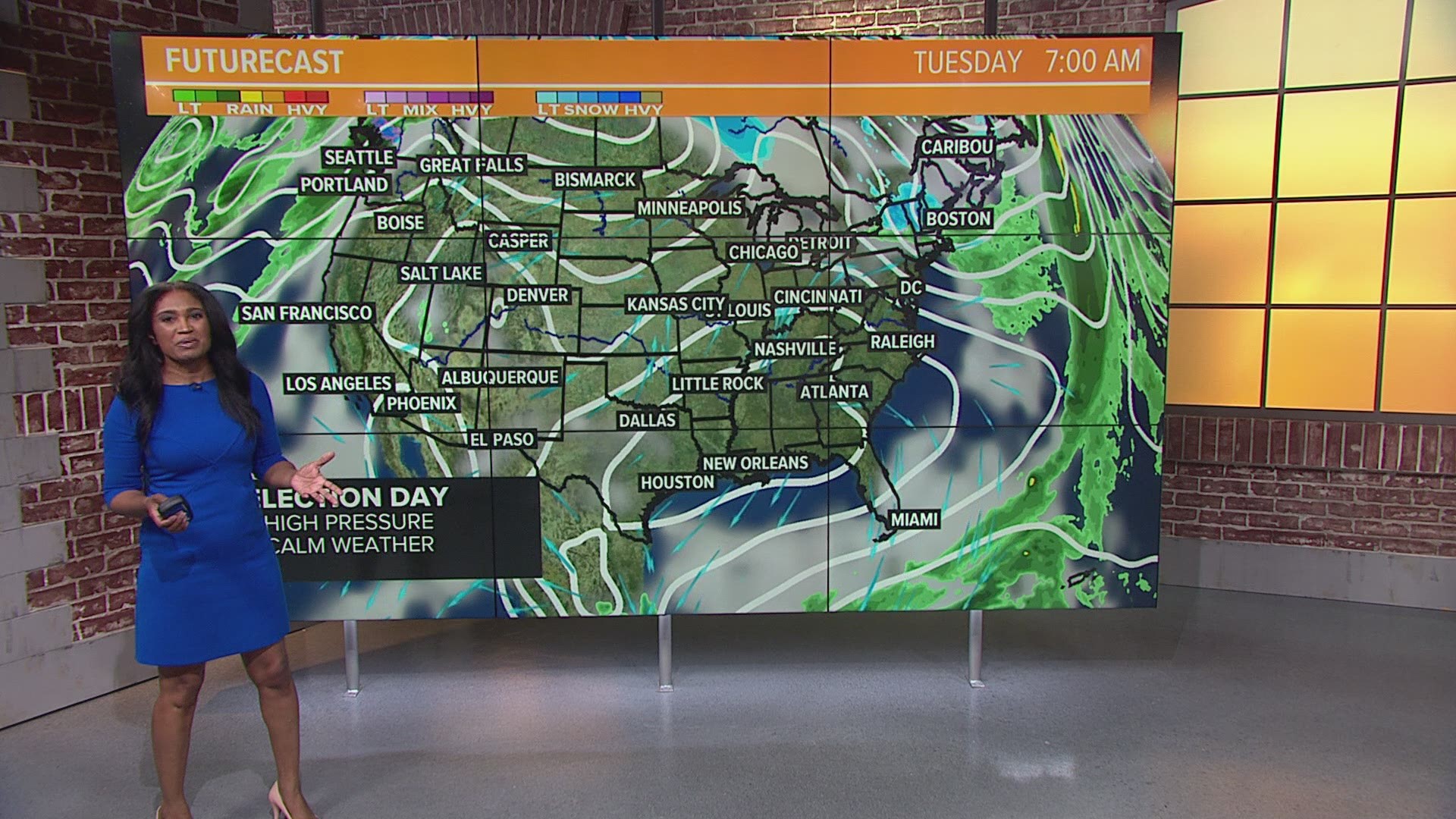 WASHINGTON — Taxes, the economy, healthcare are typically the usual topics that drive voters to the polls. But as it turns, the weather on Election Day may also impact who gets put in office.

Rain or shine, research shows that temperatures, along with rain and snow can impact voter turnout, and to some degree, who people vote for.

The warmer it is, the more people vote, an analysis published in the journal Frontiers of Psychology. The research found that warmer temperatures lead to a higher voter turnout.

The authors of the study found that for every 10 Celius (1.80 Farenheight) bump in temperature this led to a 1.4% increase in voter turnout.

"These findings add to the literature on the importance of non-ideological and non-rational factors that influence voting behavior," researchers wrote.

The authors noted that when it is warmer, people typically voted for the incumbent.

Authors based this in part on the excitation transfer theory.

"Hot temperatures lead to heightened arousal. According to the excitation transfer theory, arousal can increase both antisocial and prosocial behavior, depending on the context."

RELATED: Over 86 million people have already voted in 2020 election

Rain and snow on election days typically lead to lower voter turnout, according to researchers in a study published in the Journal of Politics.

In this 2007 study, researchers looked at the effect of weather on voter turnout in 14 U.S. presidential elections. They used GIS interpolations and meteorological data from more than 22,000 weather stations to provide Election Day estimates of rain and snow for each U.S. county. During unpleasant weather, they found that voter turnout decreased and this benefited the Republican party.

"We find that, when compared to normal conditions, rain significantly reduces voter participation by a rate of just less than 1% per inch, while an inch of snowfall decreases turnout by almost 5%. Poor weather is also shown to benefit the Republican party's vote share," the authors wrote.

Blame It On The Rain

A study released in 2018 by Dartmouth College found that rain may have led to some voters changing their minds.

The study that was published in American Politics Research examined electoral data and accounted for how voter psychology may impact elections.

“Our study suggests that weather conditions may affect people’s decisions on not only whether to vote but also who they vote for,” said co-author Yusaku Horiuchi, Professor of Government at Dartmouth College.

Their research uncovered that at least 1% of voters in the U.S. who would have voted for a Democrat, instead voted for a Republican on rainy election days.

The study was based on statistical analysis.

Here's what the authors noted about the change in partisan preference:

"The change in party preference may be attributed to a psychological behavior, where voters may be more averse to risk during poor weather conditions. Earlier studies have identified a correlation between ideological and political orientations in which conservatives or Republicans tend to be more averse to risk than liberals or Democrats," study officials wrote.

Weather across the U.S. looks fairly calm with high pressure in place. Most areas will not have rain or snow.