VERIFY: Can the Electoral College be eliminated?

With the technology available to count every vote, some people are now asking if the Electoral College is still needed? 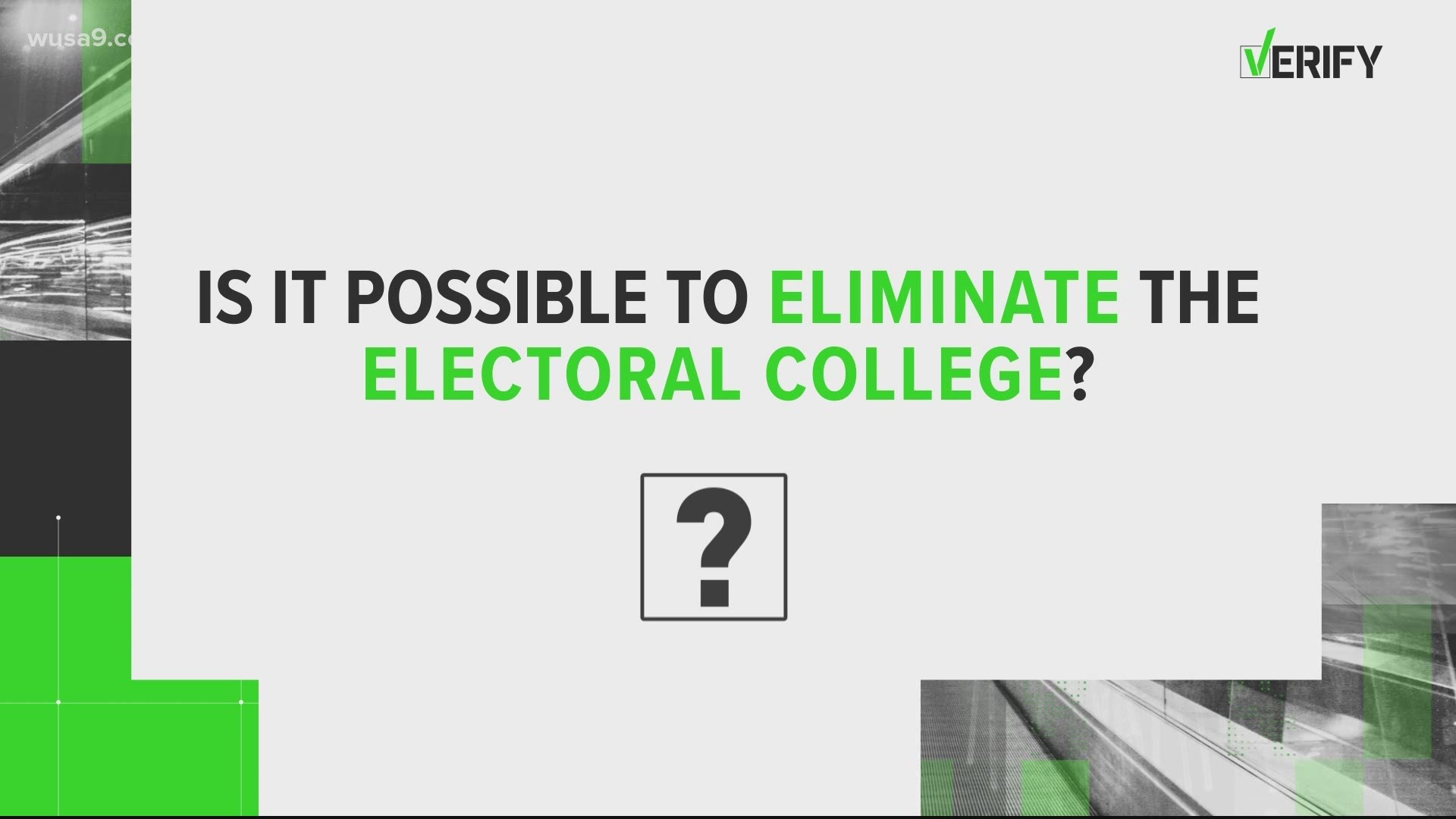 WASHINGTON — The Verify team exists to sort through misinformation and get the facts from experts.

All over social media people are asking if the Electoral College is still needed for U.S. presidential elections. This topic landed in the Verify inbox as well, with many wondering what it would take for the country to get rid of it.

"Now that we have the power to count everyone's votes almost instantly it's not needed anymore," viewer Scott Dwyer from Silver Spring said. "Is it possible to eliminate the Electoral College?"

What is the Electoral College?

First, let’s take a look at the laws about the Electoral College.

The Constitution allocates to each state the same number of electors as its representation in Congress.

For example, Maryland has eight representatives in the House, and two senators. So Maryland gets 10 electoral votes.

Virginia has 11 representatives and two senators, therefore getting 13 electoral votes.

The 23rd Amendment allows for Washington, D.C. to be treated as a state when it comes to the Electoral College -- giving the District three votes.

So who are the electors?

Professors Heberlig and Albert said each state’s political party chooses the electors. There aren’t many rules, but the elector can’t hold a public office.

"The parties choose party activists or donors who they know will vote for the party's candidate," Professor Heberlig explained.

"Selection as an Elector is a reward for their service," he continued. "Both parties send their list of Electors to the state legislature before the election. Once the popular votes are counted, the list of Electors from the winning candidate's political party becomes the state's Electors."

RELATED: How did the US get the Electoral College and how does it work?

Why is the electoral vote sometimes different than the popular vote?

As we know from previous elections, the popular vote doesn’t always match the electoral vote. According to Professor Burden, this has happened twice in the past five elections.

Hillary Clinton won the popular vote in 2016. But because President Trump won more states -- even though they're less populated -- he won more electoral votes.

"The Electoral College was put in place specifically to guard against large, more powerful states to give an equal voice to the more rural, less populated states," he said.

Here's how that breaks down:

Here's why some people are upset. If you compare those numbers to Vermont, the electors there are representing fewer people. Vermont had 630,337 residents and 3 electors in 2010. That breaks down to 210,000 residents represented by each electoral vote.

Many states have a "winner take all" approach, but Professor Heberlig explained that's not the only option.

The Constitution requires at least 270 electoral votes to win the presidency.

Could the electoral college be eliminated?

Our sources tell us this would require a constitutional amendment -- which would need a ⅔ vote from Congress, and ¾ approval from states.

Professor Heberlig says the last time this happened was when the 27th amendment was ratified back in 1992.

So we can VERIFY, it is possible to eliminate the Electoral College, but it wouldn’t be easy.