Ryan Fitzpatrick shares how his family is dealing with COVID vaccines, masks in school

Amid fielding questions about Washington's offense, the NFL quarterback gave great insight into issues parents in the region are facing during the pandemic. 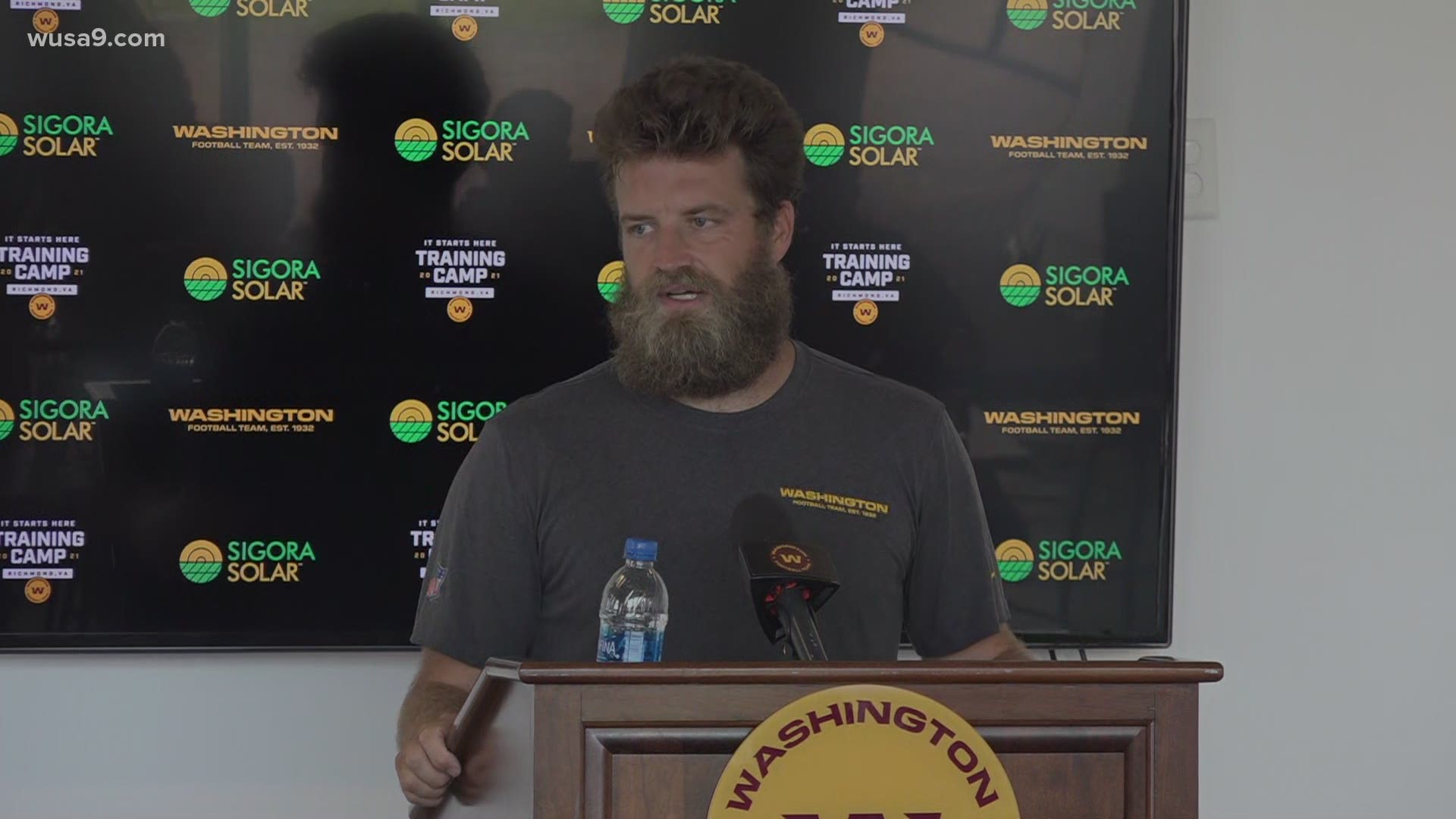 WASHINGTON — Washington's new quarterback Ryan Fitzpatrick fielded not only football questions from training camp in Richmond on Thursday, but also shared his thoughts on the COVID-19 vaccine, as case rates start to rise again across the country.

Fitzpatrick gave insight into how he is talking to his teammates about getting the vaccine, as well as how his own family, including seven kids, are dealing with vaccinations and mask-wearing with a return to the classroom happening this fall.

The 38-year-old said that he has gotten his kids who are old enough vaccinated, and will get the rest vaccinated once scientists find a safe way to vaccinate those under the age of 12. Fitzpatrick also said his kids will be wearing masks at school.

"Six of the seven were in school last year," he said. "As soon as I could get my older kids vaccinated, we did, and the younger kids, as soon as that rolls out, we'll get them vaccinated. But they'll all wear masks in school this year and follow the protocols and that's just kind of the world we live in right now."

Ryan did say he respects teammates whose decision on getting the vaccine is different than the belief he shares.

"I'm gonna respect whatever you do," he said. "You're making a decision, because you think it is best for you and your family. You know, beautiful. And my personal decision may be different than that."

Masks at schools and vaccinating children are issues many families and school districts are facing amid a return to in-person learning. Though some students were back in the classroom last spring, many have not been in schools since March 2020.

A variety of school districts, including DC Public Schools and Prince George's County Public Schools, have already said they will require masks in schools. A variety of other districts have also given down the same guidance, or are still finalizing decisions.

RELATED: NFL team with one of the lowest player vaccination rates offers vaccines to fans at training camp

Washington was one of two teams under 50% vaccinated in mid-July. Offensive tackle Cornelius Lucas was placed on the NFL's COVID-19 reserve list Tuesday.

The league sent a memo to teams Thursday telling them that an outbreak among non-vaccinated players could lead to forfeits with players on both teams not getting paid.

Washington Football Team head coach Ron Rivera said he believed Washington is now over half the players in camp fully vaccinated. The NFL last week said 80% of players have started the vaccination process and that 27 of 32 teams had at least 70% of players either receive one vaccination shot or both.

Washington is not one of them though — with numbers actually closer to 60% — and it has caused Rivera to take precautions.

“I’m truly frustrated,” Rivera said at his camp-opening news conference. “I’m beyond frustrated. One of the reasons I walked in with a mask on is I’m immune-deficient, so with this new variant, who knows? So when I’m in a group and the group’s not vaccinated or there’s a mixture, I put the mask on, and I do that for health reasons.”

Coming off an NFC East title at 7-9 and a loss to eventual Super Bowl champion Tampa Bay in the wild-card round, Rivera's message to players is that “it's go time.” That could include going to get a vaccine shot given the concern about rising virus rates for those who have not been inoculated.

“The thing that still looms over our head unfortunately is the whole COVID situation,” Rivera said. "As a football team, as individuals, we have to understand what’s truly at stake in terms of opportunities going forward, and we’ll see. We’ll see how it all unfolds, and to some degree, this tells us a little about us.”