The caddie program at the Langston Golf Course is helping local youth learn more about the game of golf, and teach them life skills that could lead to a scholarship. 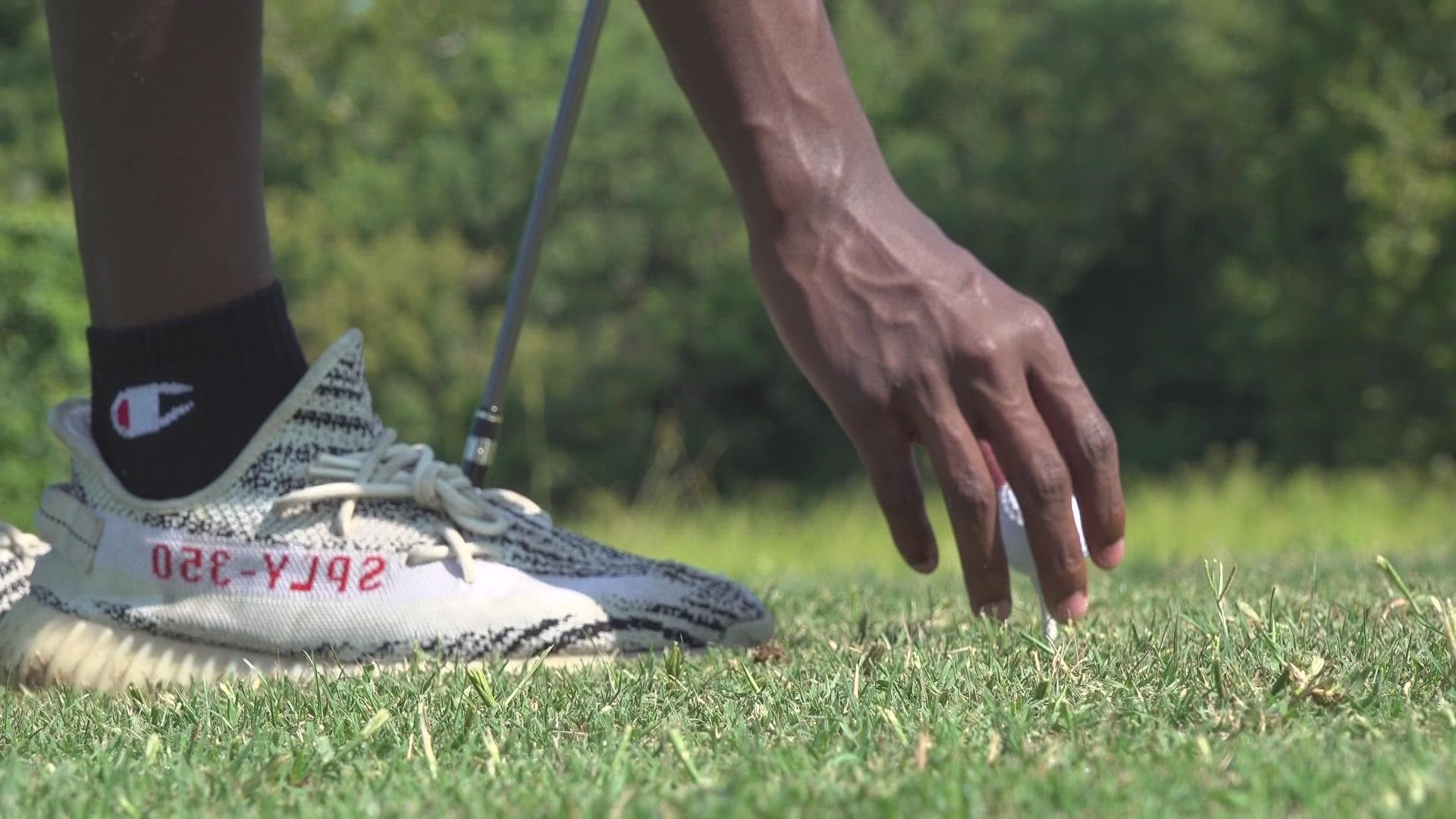 WASHINGTON — A new caddie program at Langston Golf Course in Northeast D.C. has given teens in the D.C. area a chance to learn life skills and have access to the game of golf in a way that hasn't always be afforded to them.

The program — made up of both a dozen middle to high school-aged teen girls and boys from different backgrounds and ethnicities — gives young people the opportunity to make money, learn about the game of golf and potentially earn a college scholarship. It works to spread the game to disadvantaged communities, some of the same communities that surround Langston Golf Course, east of the Anacostia River.

Craig Kirby, a National Links Trust board member and the CEO/Founder of "Golf. My Future. My Game." has played a large part in getting this program off the ground at Langston Golf Course. He believes that golf can provide an opportunity for communities of color in D.C. that haven't had advantages and access to the game as much as more affluent communities in the region.

1 / 7
WUSA9
Teens that are a part of the caddie program are able to help golfers on the course, earn some money on the side, and potentially get a scholarship for college.

From June until early September the caddie program at Langston was free for golfers, piquing the interest of the teen caddies still learning how to play the game at a young age.

But despite their young age and being new to the sport, these caddies have been trained and are helping golfers with their game. The caddies are able to read the greens, judge yardages for players' shots, tell which direction the ball is gonna be going, carry bags, clean clubs, and help golfers keep the pace of play on the course so it doesn't get jammed up.

Many of the golfers are even requesting these kids back on their bags when they get back on the course.

Creamer said that at first, he felt like he had to sell the free program to golfers that were coming to Langston, but that the more the word got out about the program, the more golfers have started using these young teens out on the course.

Depending on how many rounds of 18-holes these caddies do, tips from golfers can help these young teens save money over the summer. Caddies told WUSA9 that it's a good feeling to get tipped well when golfers think you did a good job.

But it's not only the money that these caddies are gleaning from golfers.

Nazir Wells is a 14-year-old in the caddie program. He said that his favorite part has been helping golfers, and learning from these same golfers about a game he is trying to master.

“Some golfers love giving information to you because they want you to be successful, they want you to have a purpose," said Nazir. "It’s a good program to learn about golf for someone that doesn’t play."

Nazir is a prime example of what this program is meant for: To get young people not typically exposed to golf, interested in the sport.

After only two weeks in the caddie program, Nazir said he realized his friends at school don't know golf is an opportunity for them because more traditional American sports have greater accessibility in his community.

“There are other programs out in the world they don’t know about ... At our school, they don’t really teach about golf … it's about football, basketball, lacrosse," said Nazir. "They haven’t had the experience to see the basics of golf. Only thinking about that one program that school provides.”

Something that Nazir has picked up from the game really quickly is the peace and calmness it can bring a golfer.

“It's good to deal with issues … and calm yourself down," he said. "That’s one thing I’m looking forward to in the future."

A history of caddies at Langston Golf Course

Golf is not an equal sport for all. Ask the many Black golfers that have traversed the links of Langston Golf Course in Northeast D.C. for decades. The course its self was made for African Americans in the early to mid-1900s that could not play at other courses in the D.C. area.

The history of caddying at Langston Golf Course does not start in 2021. It's an extension of a long and historical past. And though it's been at least three decades since there has been a steady caddie program at Langston, there are role models for these teen caddies to look up to.

Richard "Jelly" Hansberry is a member of the African American Golfers Hall of Fame that made his living for decades of caddying for golfers.

"Langston was [Hansberry's] backyard," Kirby said. "And he took advantage of it ... And that's the same thing that we're hoping these young men and women do."

Hansberry, a Spingarn High School graduate, grew up around Langston, and caddied at the course in the 1950s and 60s. He caddied for famous Black golfers, such as Charlie Sifford, who in 2014 was awarded a Presidential Medal of Freedom for his contribution to golf for Black Americans.

Later on in his career, Hansberry caddied for multiple PGA Tour pro golfers and has worked with CBS Sports as part of its golf coverage. He still hangs around Langston with old and new friends that he's met through the decades.

'Luck and a desire to waltz into an all-boys club'

14-year-old Hailey Smith is one of multiple teen girls on the caddie program, who says the best part of the program is exposure to new people.

Hailey also loves the relationships she has built with golfers she caddies, and even has a favorite couple that keeps the work fun for her.

“There was a couple that came a week ago named JR and Katie," she said. "They were really nice and outgoing they made caddying really fun too. And they also had fun on the golf course and had a lot of smiles."

Like many of her fellow caddies, Hailey said the hardest part of caddying can be carrying the heavy bags and going uphill on some golf holes on the course, and dealing with the heat during D.C. summers that can get toasty.

Hailey and teen girls like her will continue to grow the sport for females. And while women's golf has grown, the reality is that more growth is still needed. It's something that the woman Hailey caddied for when WUSA9 was at Langston has picked up on during her short time playing the sport.

"Luck and a desire to waltz into an all-boys club," is how one female golfer described how joining golf can feel like for women.

And the numbers back up her assessment. The number of female golfers (both adult and junior) rose by around 450,000 in 2020. But only 24% of on-course golfers are women in the United States, according to the National Golf Foundation.

The National Golf Foundation also found out that females represent a disproportionately high percentage of juniors (34%), beginners (36%) and off-course participants (45%) than they do in the overall golf population.

This means Hailey and her fellow female caddies in the program may be at the forefront of even furthering the popularity of golf with women.

Hailey is excited about where her golf game is going. And for one of the caddies in the program that is an experienced golfer, she is working on the finer details of her game just as hard as some of her fellow caddies that are still learning some basics.

What's Next For Growing the Game For Youth in the DC Area:

Craig Kirby knows that golf can be important to communities of color amid the money and opportunities that surround this game; that many business discussions, and high-end meetings, can happen on the links; and that it's a great networking sport, something kids in the caddy program can benefit from.

"There are places they are going to go where they may not be comfortable, and we want them to know they do belong and that they have to be comfortable in order to be there," Kirby said.

The caddie program is coming to an end for the season. But the hope for Kirby and the organizations involved is to implement this program at National Links Trust's other two courses — Rock Creek Golf Course and East Potomac Golf Course.

"It provides these kids with another option," Kirby said. "I share with people all the time, 'if you give a kid an option, they can make a choice' ... they can't make a choice if they don't have an option."

Kirby added that the golf world has started to reach out to local community organizations to help grow golf in urban and minority communities. He said there's a long way to go, but that he's confident it's heading in the right direction for inclusivity.

“Well, let’s just say improvement is the largest room in the world, and they are improving … But they got a lot to go,”  he said. "But the industry is now working with the community-based golf organization. It’s a great meld … they realize these community-based golf organizations know where to go and who to talk to get people interested in the game."

Growing the game in D.C. for the caddie program includes working with the First Tee of Greater Washington, holding open houses and consulting the organizations in the community that can spread the program's good works.

Langston's caddie program is sponsored by National Links Trust, the Western Golf Association  and Golf. My Future. My Game.