Unfortunately, the yellow lab's last game with the team was a 4-1 loss to the New York Rangers on Saturday. 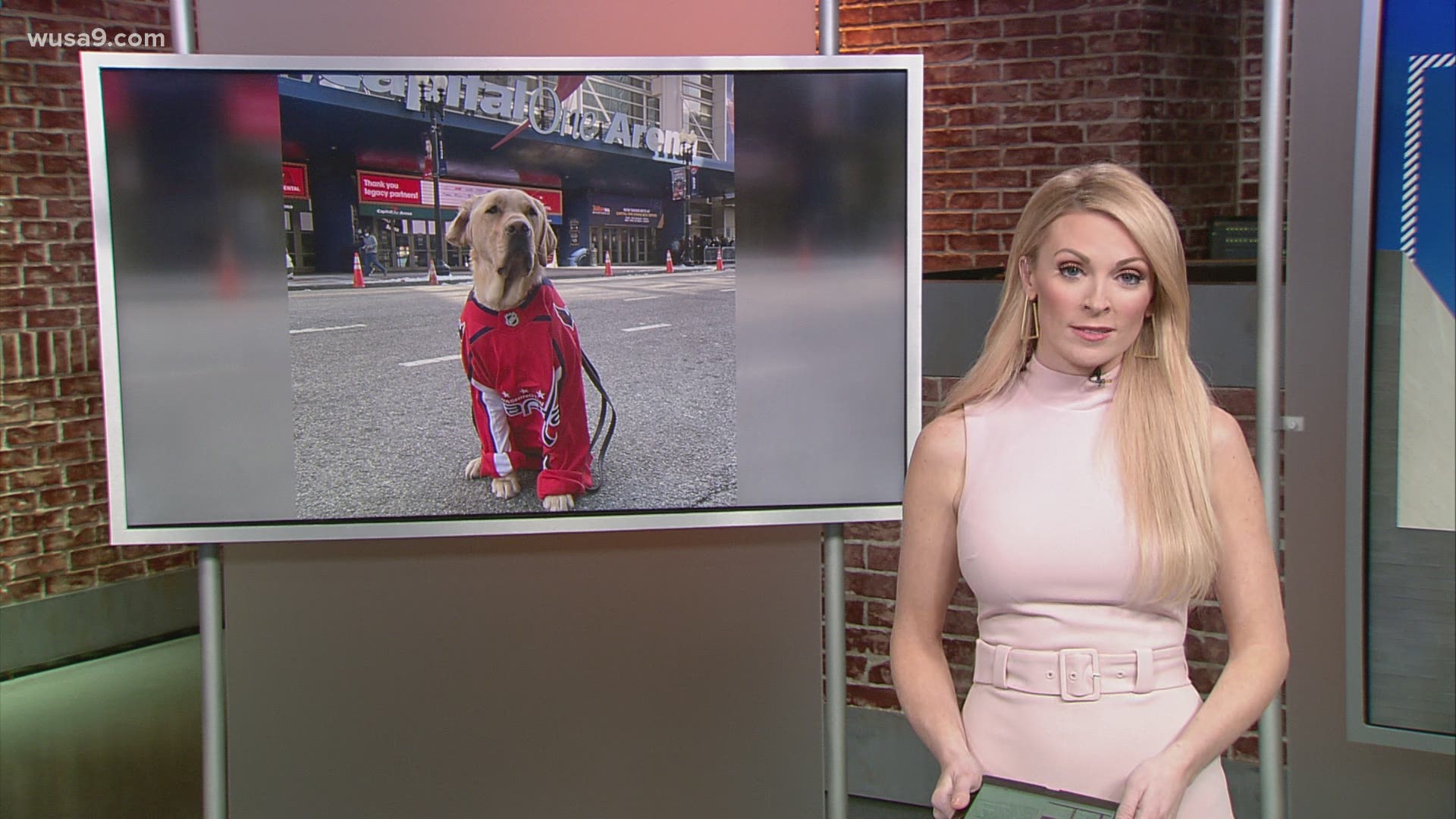 WASHINGTON — Captain took the hearts of Washington Capitals fans in 2020 when he joined the team as an unofficial mascot. Unfortunately, the yellow lab's last game with the team was a 4-1 loss to the New York Rangers on Saturday.

Captain will continue his duties now as a service dog, something that was known when he joined the team last year. He will still be training to become one through American Vet Dogs, which provide service dogs and their training for veterans that need their use.

"What an amazing last 17 months of being a hockey dog !! from my debut, developing my skills and meeting all my best hockey pals, I've had the bestest time with the Caps! But it's almost time for me to go off and do what I've been training for my whole life!," said Captain in a Twitter post.

i’ll still be posting here as i go to training camp in a few days so keep following along !! and today im seeing my buds for the last time as a member of team pic.twitter.com/vBBSPHle8B

Captain's team-run Twitter account will still have updates on his "training camp" for becoming a service dog, so fans won't be missing out on the life of this good boy.

The Capitals had fun with Captain during his time with the team.

Aside from the Twitter account, the Caps public relations and marketing team used him in posts about Valentine's Day and for the holidays. And of course, Captain had plenty of adorable videos interacting with Caps players.

Captain is one of multiple "team pups" that some National Hockey League teams have had as unofficial mascots.

Alexis Lafrenière got a chance to play on the New York Rangers' top line with Mika Zibanejad and Artemi Panarin, and the result was one of the team's most complete efforts of the season.

Lafrenière scored his second NHL goal, Panarin had two assists and the Rangers made the best of a new-look lineup, beating the Washington Capitals 4-1 Saturday for their second consecutive victory.

“We felt great today, had many chances,” Panarin said through an interpreter. “Obviously we felt it today, and it was great to see Alexis score.”

Lafrenière, the top pick in the 2020 draft, cashed in on his promotion by scoring for the first time in eight games. Panarin set up Lafrenière on the doorstep late in the second period, and his shot provided the rebound for Chris Kreider's power-play goal in the first.

“Goal-scorers thrive off confidence, and usually when one goes in it starts a little bit of a snowball effect, so we certainly hope that happens for Alexis,” coach David Quinn said. "He continues to improve, come to the rink with a great attitude and work hard, and as long as he continues to do that, good things are going to happen for him.”

With a goal and an assist, Ryan Strome made history as the first player to record 100 points apiece with the Rangers and Islanders. The fifth overall pick of the Islanders in 2011, Strome never saw himself hitting this particular milestone.

“Not the way I thought it would have played out,” Strome said. “I think my time here has been pretty good, and I got to 100 a lot quicker than I did with the Islanders."

Igor Shesterkin made 27 saves, Mika Zibanejad sealed it with an empty-netter with 2:12 left and New York strung together back-to-back wins for just the second time this season.

Zibanejad's goal was just his second since last season after scoring 41 in 57 games in 2019-20. Like with Lafrenière, seeing the puck go in the net could have a domino effect for Zibanejad.

“If you look at his reaction, you sensed relief," Quinn said. “It’s not going to happen overnight. He’s not going to go from where he is to where he was last year. We just need to continue to see progress and thought that was another step in the right direction.”

The Capitals struggled to match the Rangers' energy early in a game moved up to an afternoon start, falling behind 3-0 before Dmitry Orlov scored his first goal of the season with 38.2 seconds left in the second period. Vitek Vanecek allowed three goals on 24 shots in his 13th consecutive start, and Washington's winning streak was snapped at two.

“We were building toward setting our standard of what we require out of each other, and I think we were on the right track,” winger T.J. Oshie said. “(This game) was another look at how we don’t want to play. It shows that we are still learning as a group.”

The Rangers' Kaapo Kakko was a surprise scratch after being added to the NHL's COVID-19 protocol list. The 2019 No. 2 pick previously was on the list Feb. 1-2, when he missed one game.

“Obviously you’re concerned any time someone gets put on this list, so we’ll talk here shortly and see how he feels,” Quinn said. “From what I gather there hasn’t really been any symptoms yet, so we’ll see.”

Beyond Quinn's changes up front, the Rangers got rookie defenseman K'Andre Miller back after he missed two games with an upper-body injury. Miller replaced Jack Johnson on the blue line, which is without Jacob Trouba for at least a month because of a broken thumb and Tony DeAngelo for the foreseeable future as the team attempts to trade him.

“We’re still working to get Sammy back — he’s just had a long time off here — to get him back to where he’s going to be comfortable where he does play a game for us," coach Peter Laviolette said. “We’ll continue to work on his conditioning.”

Rangers: Get a few days off before visiting the Philadelphia Flyers on Wednesday.

Capitals: Get right back at it Sunday night against the New Jersey Devils.