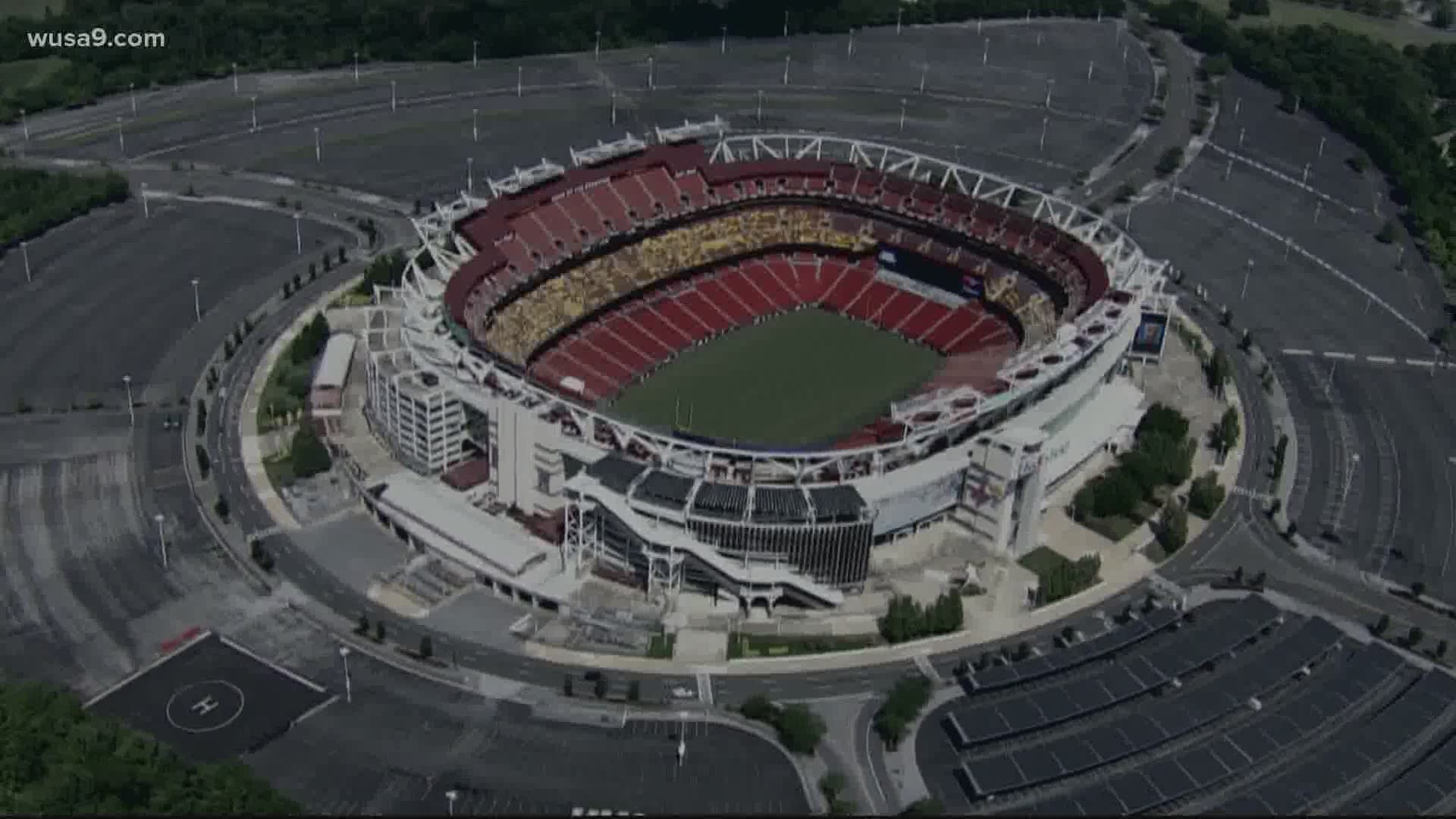 LOUDOUN COUNTY, Va. — The Washington Football Team announced it will play games without fans at FedEx Field for the 2020 season out of an abundance of caution.

The team said it had developed a comprehensive health and safety plan in close coordination with the State of Maryland and Prince George's County, the organization said the rapidly changing nature of the COVID-19 pandemic has caused them to reconsider fans in the stands.

The hope is to re-evaluate the decision if the situation improves over the course of the season, a release from the team said Wednesday.

"We are fortunate to host the best fans in the NFL year after year, but the well-being of those supporters, along with that of our players, coaches and each and every member of our gameday staff is simply too important, and the current knowledge of COVID-19 too unpredictable, to welcome our fan base to FedExField to start the season," said Washington Football Team owner Dan Snyder. "We were the first team in the league to recall our scouts and other personnel from the field back in mid-March and have been monitoring this evolving situation ever since. This decision was not an easy one, but after several discussions with federal, state and local officials – along with input from some of the nation's foremost medical experts, based right here in the nation's capital – we are confident that it is the right one. We are working to find ways to make our fans' presence felt in new and innovative ways for 2020 and can't wait to welcome the community through the gates as soon as it's safe."

The franchise has reached out to season ticket members with financial alternatives for their ticket plans. Similarly, the customer service team will be prepared to answer questions from those who have purchased single-game tickets for the 2020 season and information will be available on the tickets section of WashingtonFootball.com.

Washington Football Team To Kick Off 2020 Season Without Fans At FedExFieldhttps://t.co/UjDoaabopE

Right now, the Washington Football Team's season still plans to kick off on Sept. 13 against the Philadelphia Eagles.

The NFL released its rules and guidelines for playing through the pandemic.

Those players who opted out of the season will be given a $150,000 stipend, but it's considered a salary advance for 2021.

Players who opted out based on an underlying medical condition will receive a stipend of $350,000 that will not be treated as a salary advance.

"It's a very serious situation and from what I've heard from all the guys opting out and listened to their reasoning, it all makes sense," Washington head coach Ron Rivera said. "I actually talked to one of our players who did opt out and it was very heartfelt, and we had a great discussion and I told him I respect his decision."

The pandemic isn't the only reason the season will look different from those in the past.

This is the first season the team will take the field without a logo or a team name. The organization retired the original team name and logo in July.

Snyder, who has been adamant throughout his ownership of the team that the nickname should not be changed, reversed course after the weight put on him amid calls for social justice changes in the United States, sparked by the death of George Floyd in Minneapolis.

A new team name has not yet been decided.