The Loudoun County Board of Supervisors announced their support for a new team name in a letter to Snyder's office Wednesday. 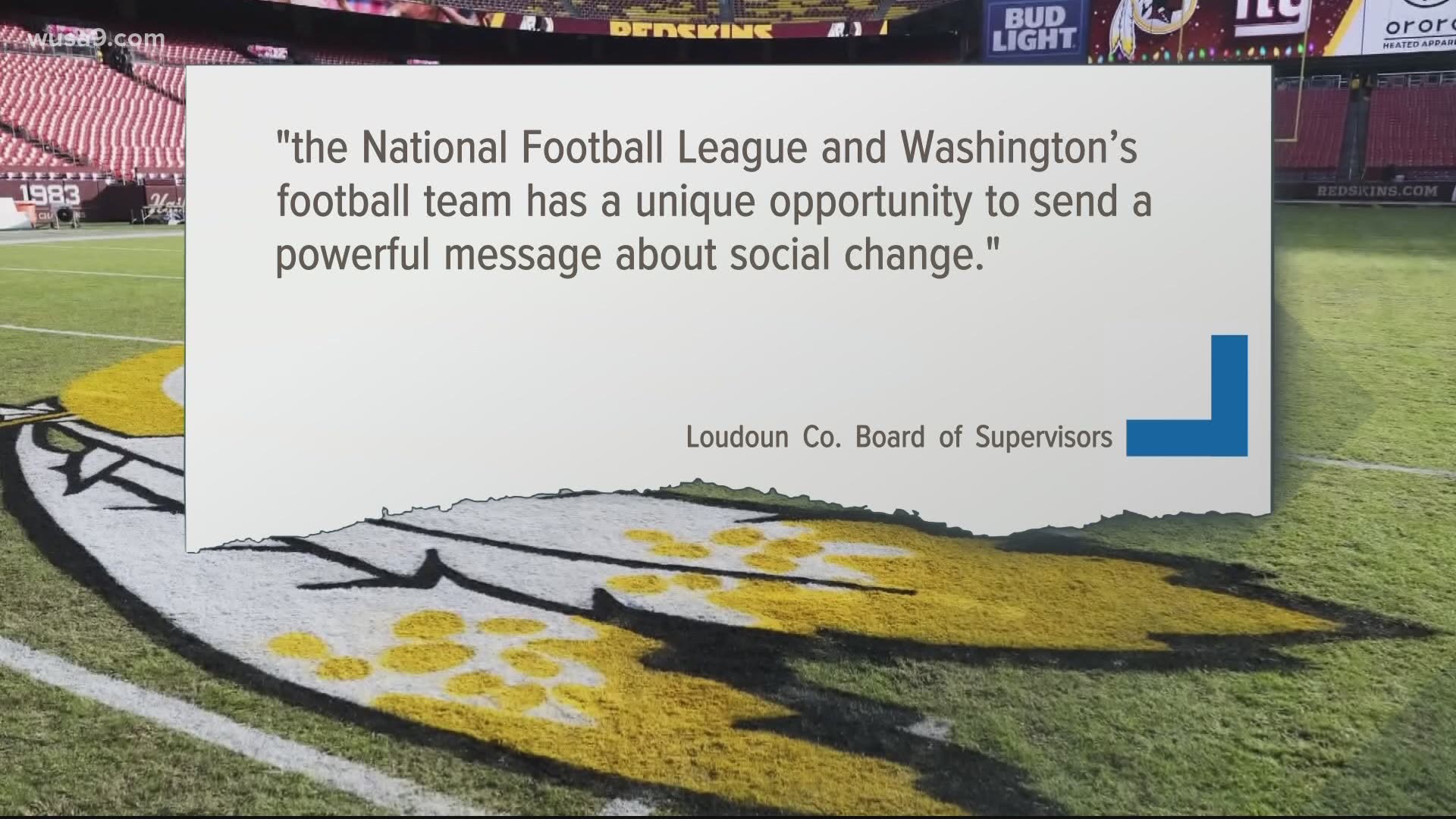 LOUDOUN COUNTY, Va. — Loudoun County is showing their support for a new NFL team name in Washington, urging the franchise to take ahold of the "unique opportunity to send a powerful message about social change" in a Wednesday letter to Dan Snyder.

The franchise's corporate headquarters and team practices are located in Ashburn, which is in the eastern part of Loudoun County. The team announced July 3 that they would be undergoing "a thorough review" of the team's name following increased demands for racial awareness and complaints about the history of the team's mascot.

The team practices in Ashburn with home games played in Landover, Maryland. Wednesday's letter from Loudoun County follows a similar letter demanding change from Landover's FedEx Field, now making both areas where the franchise plays now calling for a shift.

"Because you have been such an integral part of Loudoun, you are aware we are a welcoming community with residents from diverse backgrounds," the letter, co-signed by county members Phyllis J. Randall and Koran Saines, says. "We are proud that people of all races, ethnicities, differing abilities, religious beliefs and socio-economic backgrounds call Loudoun home."

The NFL team wouldn't be the first in Washington to change its name. But the importance of a name switch would set a precedent in how the league facilitates discussions in the nation’s current social climate and would allow the team to focus less on name controversy and more on the game.

"A transformation is sweeping the nation and people from all walks of life and backgrounds are understanding we can no longer be a country where some benefit on the historical pain of others," the letter says. "By changing a name that so many find offensive, your team, and all the thousands of fans can focus on what you do best…fielding a world-class football team."

It's unclear what the process of the franchise name change would look like or when the changes would officially take place. Head coach Ron Rivera has previously said he hopes the new name would be in place by the start of the season.

Regardless of the timeline, the new wave of support from local stakeholders brings an onslaught of pressure to the staunch name-change critic in Snyder, who said previously that the process would involve conversations with multiple stakeholders -- including those local communities like Loudoun.

"This process allows the team to take into account not only the proud tradition and history of the franchise but also input from our alumni, the organization, sponsors, the National Football League and the local community it is proud to represent on and off the field," Snyder said in a July 3 prepared statement.