VERIFY: Did a poll show that 9/10 Native Americans were not offended by Washington's NFL team name?

Amid online debate over the 'Redskins' name, there's likely to be a few references to a 2016 poll from The Washington Post. The Verify team digs into the details. 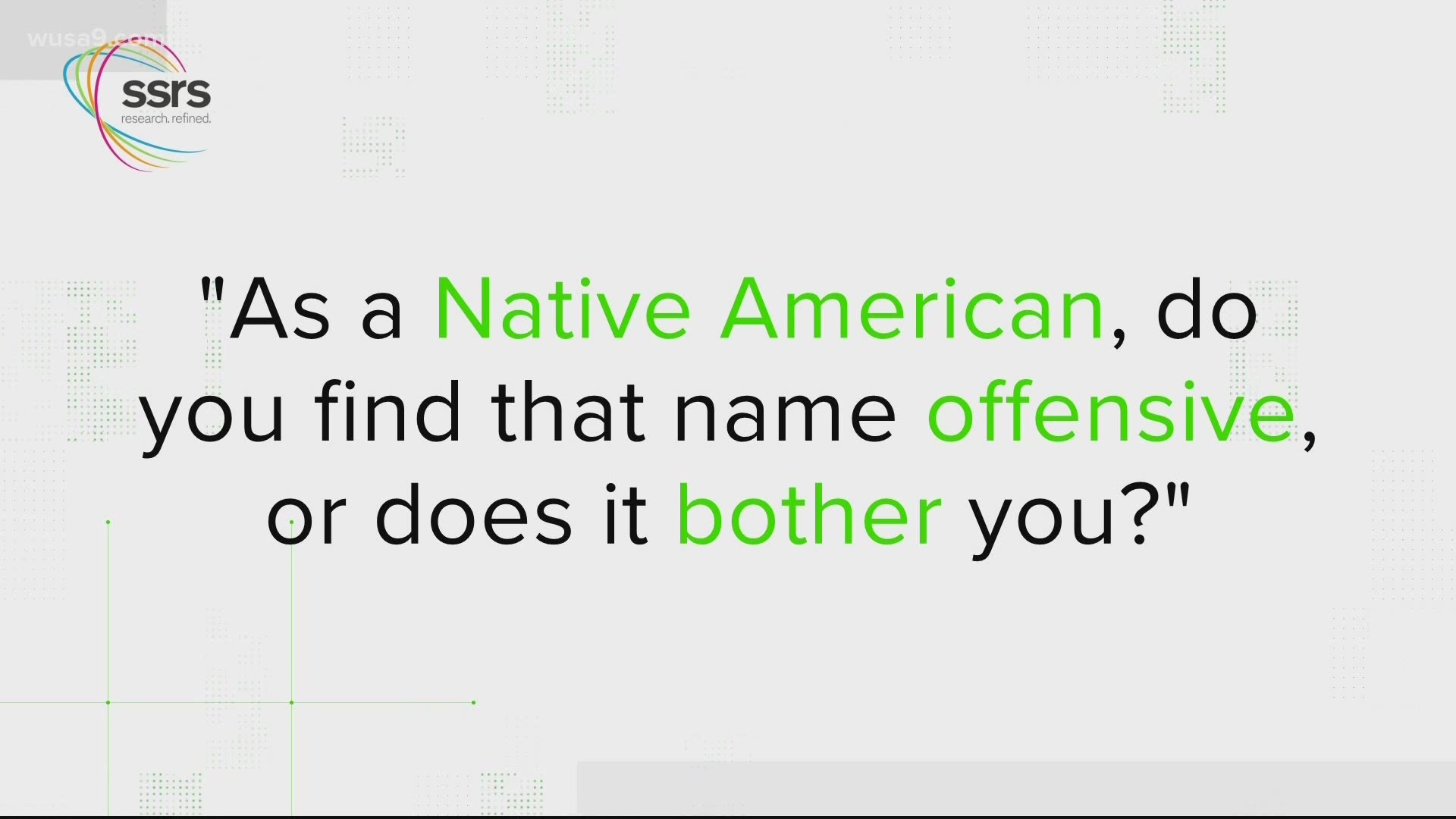 Was there really a poll in which 9 out of 10 Native Americans said they were not offended by the 'Redskins' moniker?

Answer: Yes. The poll was released by The Washington Post in 2016. But there is additional context needed.

Since the poll was released, it's faced criticism from various Native American groups. Other organizations have done surveys of their own, and have found different results.

A University of California Berkeley study, released in February 2020, questioned more than 1,000 people who self-identified as Native American.

The results showed that 49% of respondents agreed or strongly agreed that the name was offensive. That number jumped to 67% for those "frequently engaged in tribal cultural practices."

Every time debate arises over the 'Redskins' moniker, it's almost inevitable that someone will bring up a 2016 poll conducted by The Washington Post. The headline of the article told the story:

The Verify team looked through the results, as published by the Post. The paper partnered with a pollster named SSRS, which defines itself as a "full-service survey and market research firm."

FiveThirtyEight, a website that tracks polling, gives SSRS a rating of "B/C," after evaluating 18 of their polls.

In conducting this 2016 poll, SSRS spoke with 504 people from every state and the District, who self-identified as Native Americans. Each of them was asked about the name, with the same wording:

"The Professional football team in Washington calls itself the Washington Redskins," the question began. "As a Native American, do you find that name offensive, or does it bother you?"

The Washington Post reported that 90% of the respondents said that the name did not bother them.

In their analysis of their findings, the Post did mention the difficulty of getting a good sample with the Native American community.

"Surveying the Native American population is difficult," their article read in part. "Because of the group's relatively small size and the fact that many who live on reservations lack landline telephone access."

Using cellphones and landlines, the pollsters were able to reach more than 500 people, which the Post wrote was sufficient.

"Surveys of this size can produce accurate estimates of any size population by employing 'probability sampling,'" the article read in part. "Where every member of the population has a known and equal chance of being selected."

The poll has faced criticism. The Executive Director of the National Congress of American Indians released a statement shortly after the study was released.

"The survey doesn't recognize the psychological impacts these racist names and imagery have on American Indian and Alaska Natives," wrote Jacqueline Pata in a statement. "It is not respectful to who we are as Native people."

In response to our questions about this criticism, The Washington Post sent the following statement:

"Our 2016 poll on views of the Redskins’ team name is the most recent survey based on a random national sample of Native American adults. We were transparent about our survey’s methodology, including how questions were worded and what steps were taken to ensure the sample was representative of Native Americans’ opinions."

In 2019, the Post released results from a new survey that tackled a similar topic.

The survey questioned 500 people online who self-identified as Native Americans, and found that 68% of the respondents were not offended by the name.

This new study was web-based, while the 2016 poll was done by phone, which meant the "numbers can't be compared," the article read.

In February 2020, yet another survey was released by researchers at UC Berkeley. In this analysis, 1,021 self-identified Native Americans were recruited to answer questions about the name online.

In the end, this analysis found that 49% agreed or strongly agreed that the name was offensive. That number jumped to 67%, for those who "frequently engage in tribal cultural practices."

RELATED: The Redtails: A brief history of the better name for our Washington football team

RELATED: Here's everything you need to know about Washington's NFL team name change

RELATED: How and where you can watch your DC sports teams as professional leagues start back up soon