VERIFY: In the past 20 years did the majority of mass shooters take psychotropic drugs before committing a crime?

Experts say very few perpetrators have taken psychotropic medications, and there is no evidence linking them to mass shootings 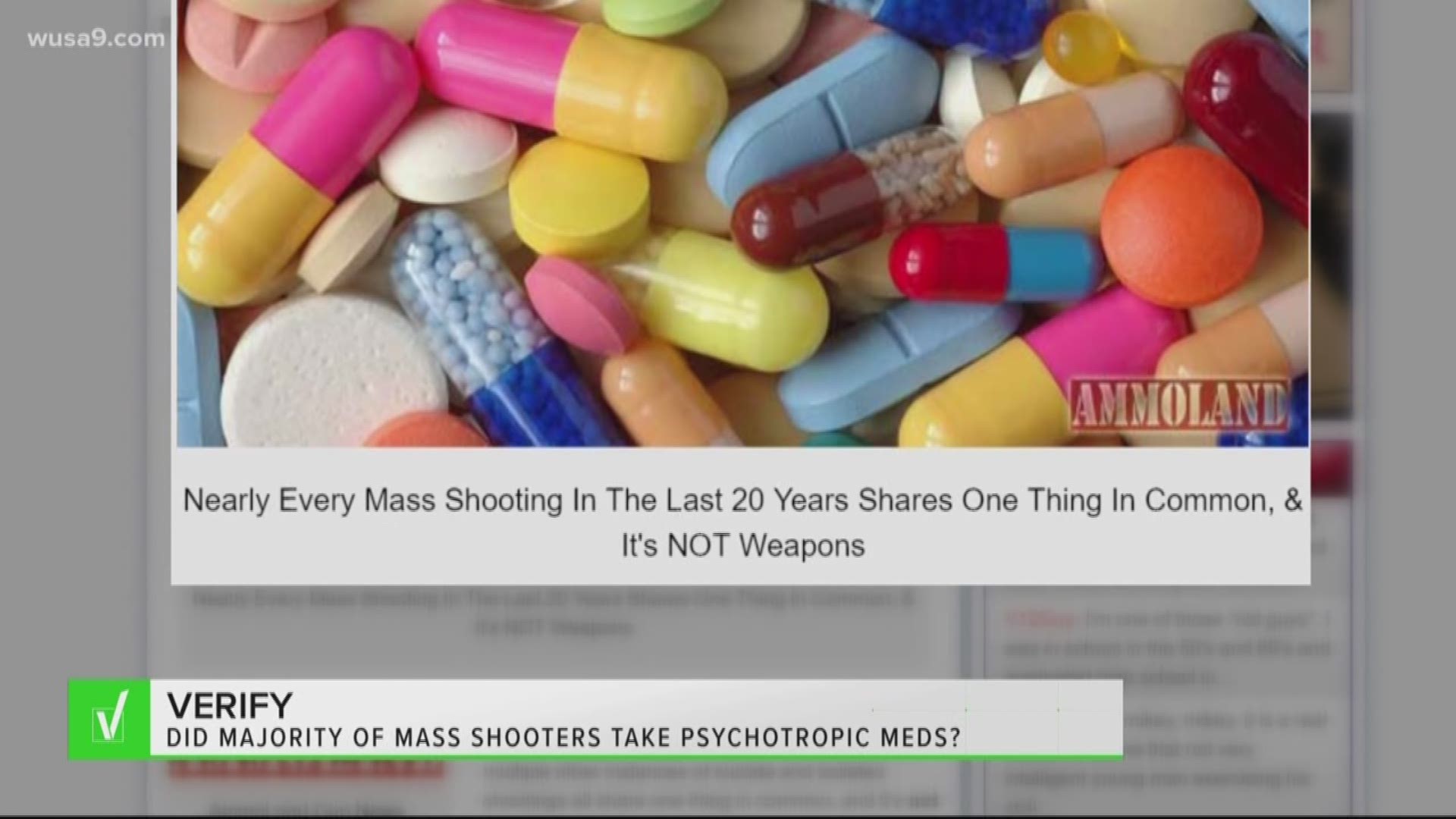 In the past 20 years did the majority of mass shooters take psychotropic drugs before committing a crime?

False, Criminologist James Fox says only a few perpetrators were ever found to have been taking psychotropic drugs like anti-depressants and anti-anxiety medications.

Furthermore, there is no scientific evidence that suggests these medications play any role in mass shootings.

After the mass shootings in Dayton and El Paso, a viewer reached out to the Verify team with a suspicious-looking article, she wanted our researchers to check out.

"This article was posted on Facebook," she wrote. "Is it true?"

The article was published on a pro-gun site called "Ammoland.com" and claims that in the last 2 decades, nearly every mass shooting perpetrator took psychotropic drugs beforehand. It then lists names of past shooters as "proof."

It's a popular argument spread frequently on social media, and usually in combination with discussions of gun violence and mental illness.

So we're verifying: In the past 20 years did the majority of mass shooters take psychotropic drugs?

To get our answer we consulted three criminal justice experts: a criminologist, sociologist and psychiatrist, who have all researched mental illness and gun violence.

They all agree: there is no link between psychotropic drugs and mass killings.

"No, it's not true..not true that a majority, not true that a lot, a few," James Fox, a criminologist with over 40 years experience who currently works at Northeastern University, explained.

"One of the cases that is often used to illustrate it is of Joseph Wesbecker, who was using Prosaic and about three or four weeks after being prescribed Prosaic went on a rampage in his place of employment killing eight and wounding 12 others," Fox said. "The thing about that is, this guy had been planning this thing for months, long before he started taking Prosaic."

"There is no credible scientific evidence that I am aware of that would suggest psychotropic medications play any role in mass shootings," Swanson said.

He says that whats important isn't the list of names included in the Ammo Land article, it's the names that aren't included, in essence, cherry-picking data and creating a false correlation.

"Why not point to some other “factor” that is common to 100% of mass shooters—wearing shoes, for example," Swanson said. "Every mass shooter on record was wearing some type of shoes at the time, but it would be absurd to blame shoes for mass shootings."

One things certain, the science just isn't there.

"I do not know of any research linking medications to mass shootings and in fact there is some work showing benzodiazepines decreases violence," Michael Rocque, associate professor of sociology at Bates College, said. "In other words, I would not be confident linking the medication to violence, let alone mass shootings."

So we can Verify, no, very few mass shooters were taking psychotropic drugs and there is no evidence these medications play any role in mass shootings.