VERIFY: Is Jane Fonda's treatment consistent with DC criminal procedure or is she getting special treatment? 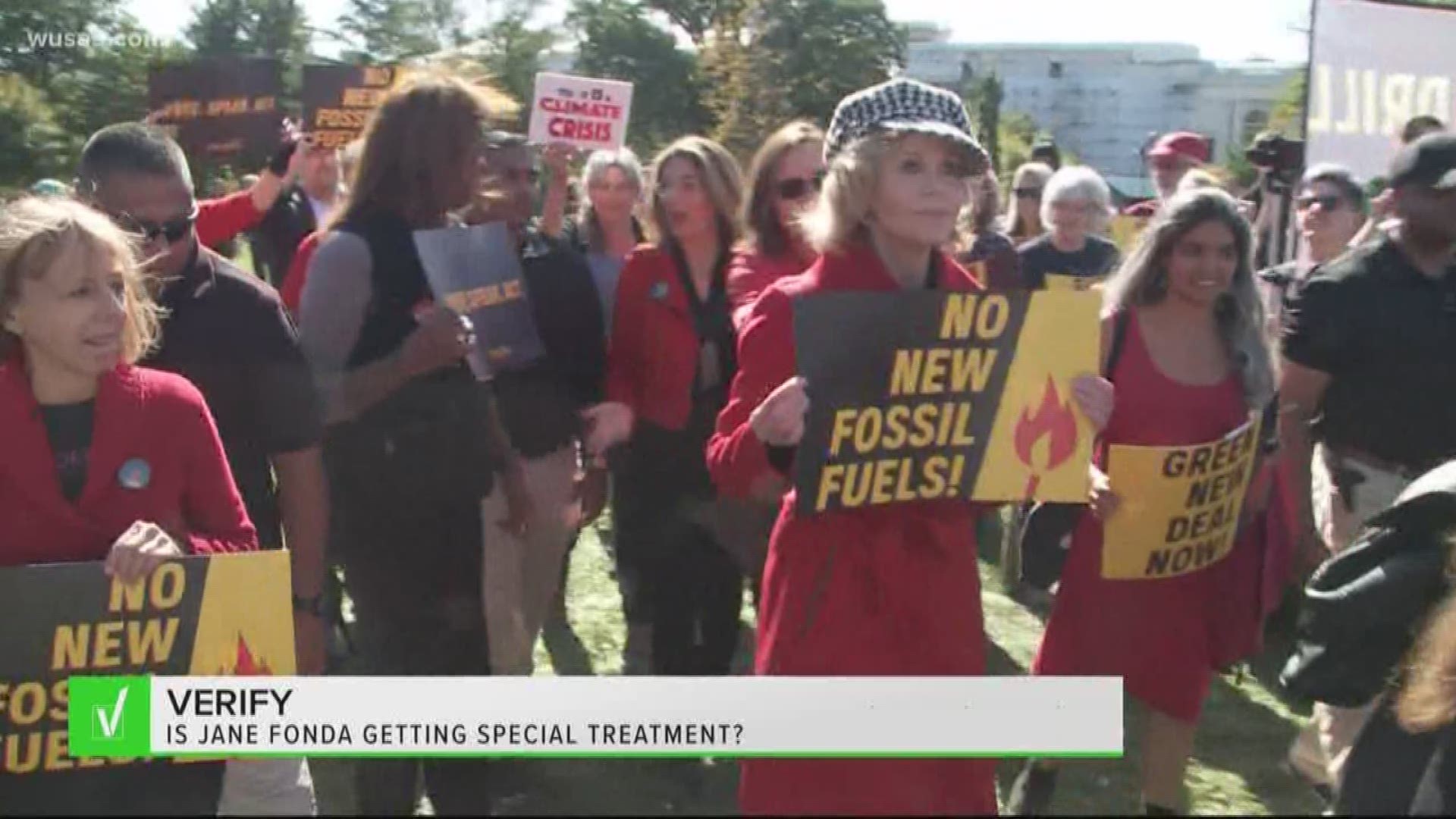 Is Jane Fonda getting special treatment from Capitol Police and DC's Attorney General, or is she being treated like anyone else arrested on similar charges?

No, Jane Fonda’s not getting special treatment. Her case history is not unique, and consistent with DC.. criminal procedure.

Jane Fonda’s been arrested four times so far while protesting outside the Capitol building for Climate Change reform. So far, she has not been arrested during her sixth protest on Friday.

She spent the night in jail after her fourth arrest, according to the Associated Press. Another time, she paid a $50 fine and left without being charged.

Week after week, Fonda is out on the Capitol steps sporting her now-iconic red jacket.

One of you emailed us asking, what's the deal?

Is Fonda getting any special treatment or is this normal criminal procedure?

They all agree, Fonda’s not getting any special treatment, this is typical for minor misdemeanors.

"This is a charge prosecuted by the D.C. Attorney General's office, Karl Racine. They are a more progressive prosecutorial agency than the U.S. Attorney's Office and like all prosecutors have the discretion to pursue or drop a charge. Police officers make the original charging decision and whether to take an arrested person into custody or give them a citation to appear in court.

It's a minor charge not always resulting in custody. These kinds of charges are often 'no-papered' (not prosecuted) at the first appearance in court."

"For those types of cases they have what they call a 'post and forfeit,' which means that you post collateral, forfeit the collateral and the charge goes away and doesn't even count as a conviction," Copacino said.

Fonda had her case disposed with a "post and forfeit" on Nov. 8, according to court documents.

Experts say nothing about Fonda's cases is unusual.

"The law does not allow you to be held for that charge, beyond the time it takes to process and go to court," Benowitz said. "Most people doing these protests..don't have extensive criminal records, and there's no warrant on them to hold them for something else, they're not going to be held beyond the next day, so they get released [police] issue them a citation."

So, we can Verify, no Jane Fonda’s not getting special treatment.

RELATED: For the first time in a month, Jane Fonda avoids arrest while protesting for climate change