VERIFY: No, you cannot change your vote after submitting a ballot in DC, Maryland and Virginia

Tuesday morning President Trump tweeted that people should consider changing their vote if they voted absentee for Biden. We look into whether this is possible. 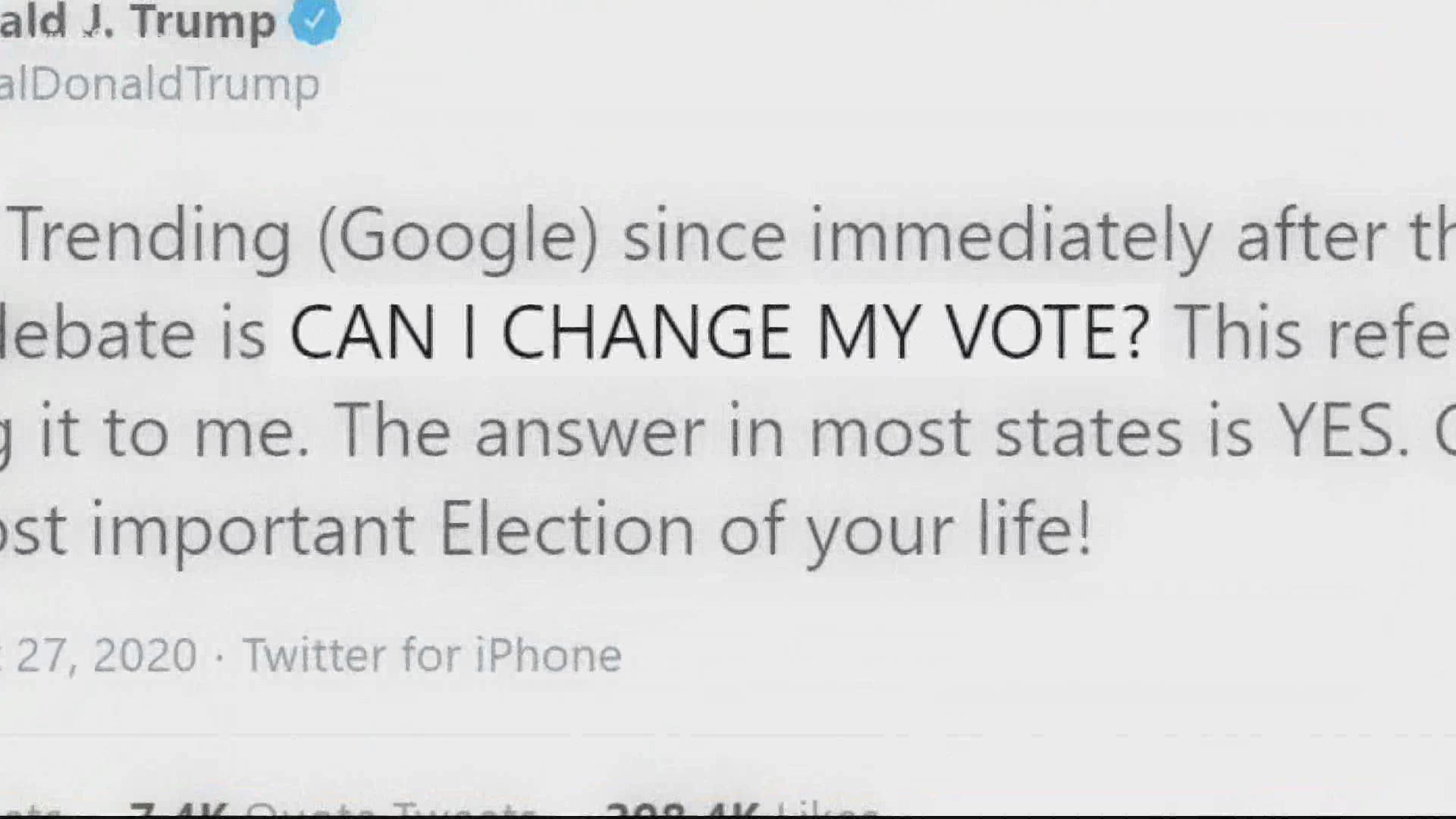 If you live in D.C., Maryland and Virginia, can you submit a new ballot if you voted absentee and then changed your mind?

In D.C., Maryland, and Virginia, you are not allowed to submit a new ballot if you voted absentee and then changed your mind.

Do some states allow you to 'change your mind,' and submit a new ballot?

Yes. Multiple states allow voters to cast a new ballot if they change their mind -- but there are restrictions. The individual policies depend on the state. States have deadlines for when voters must decide to 'change their minds,' some of which have already passed.

If the state is not processing until Election Day, as some states are, a voter might be able to send a new a ballot if their state has an allowing policy. Many states are already processing and counting ballots, meaning a voter wouldn't be able to cast a new one regardless. Some areas like Virginia and Maryland and DC don't allow for voters to recast at all.

Once ballots have been processed and removed from the envelope, they are finalized, and can no longer be canceled and replaced.

DC Board of Elections

When it comes to politics, the VERIFY Team wants to be a resource, separating fact from fiction. Our inbox has been filled with questions about a recent tweet from President Donald Trump.

Strongly Trending (Google) since immediately after the second debate is CAN I CHANGE MY VOTE? This refers changing it to me. The answer in most states is YES. Go do it. Most important Election of your life!

After referencing an alleged spike in Google searches of the phrase "Can I change my vote," he urged his followers to do so if they voted for Joe Biden absentee and have changed their minds since then.

"Go do it," he wrote. "Most important election of your life."

The VERIFY Team started our research by reaching out to election officials in D.C., Maryland, and Virginia.

All three jurisdictions said that voters are not allowed to change their vote, after doing so absentee.

Spokesperson, Maryland State Board of Elections:

Spokesperson, DC Board of Elections:

"No. A voter can not change their vote."

"People cannot change their vote after voting early or by absentee in Virginia."

The VERIFY Team then reached out to experts at the National Conference of State Legislatures and the Bipartisan Policy Center. They both confirmed that some states do allow voters to change their votes, although with differing deadlines and policies.

Matthew Weil, the Director of the Elections Project at the Bipartisan Policy Center, said that the main factor is whether the absentee ballot envelope has been opened and processed.

"Once a state has taken your ballot," he said. "And they’ve verified your eligibility, and they’ve separated the ballot from the ballot envelope, the game is over. There’s no way to link it back to you.” 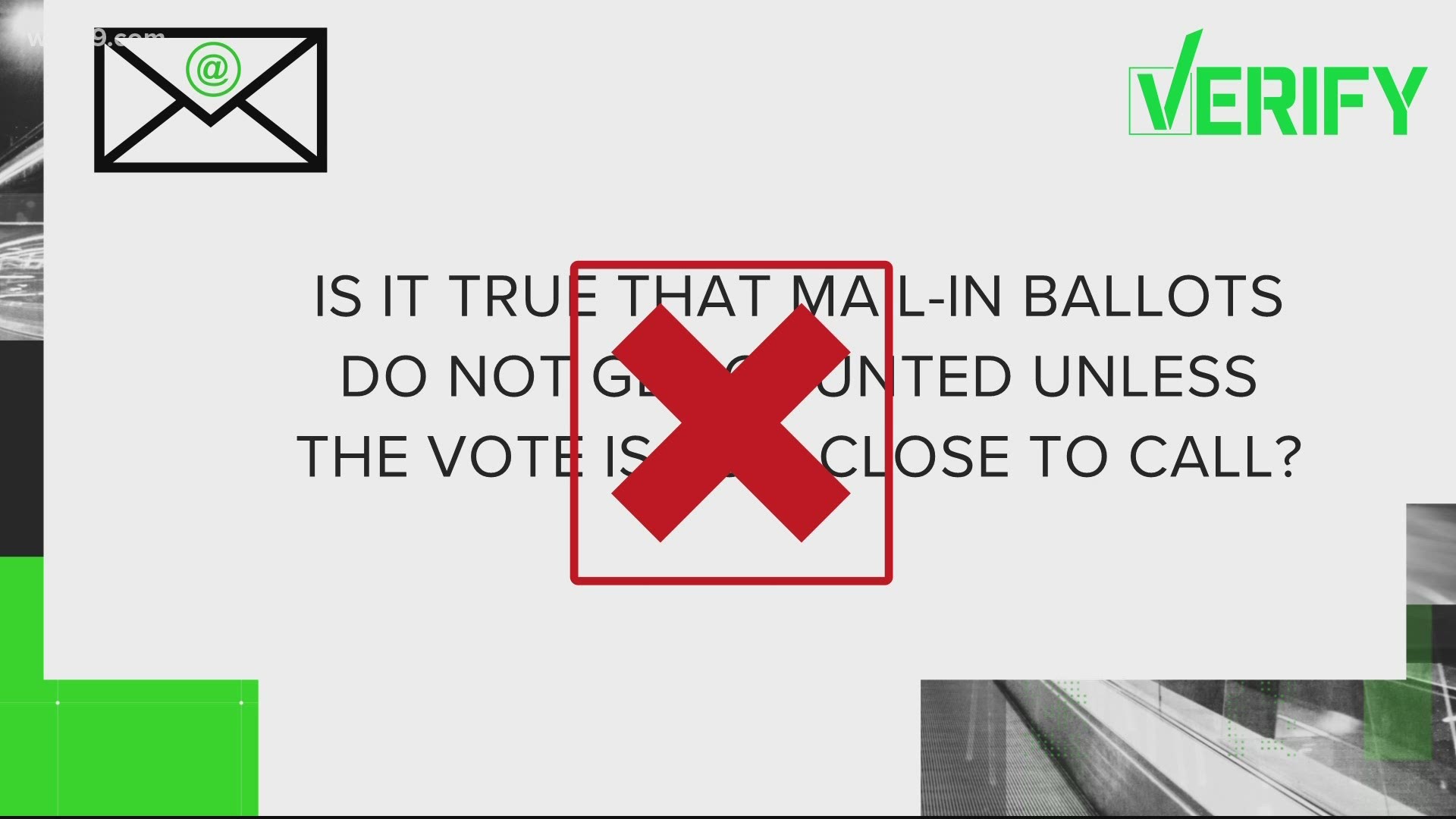 The National Conference of State Legislatures said that if a ballot has been opened and counted, it can no longer be changed, regardless of the state.

The VERIFY Team reached out to multiple states that allow voters to replace their absentee ballots if they change their mind. Wisconsin, Minnesota, and New York sent the VERIFY Team their policies.

Voters can receive up to three ballots if they make a mistake or change their mind under certain circumstances.

Voters who have been issued an absentee ballot by mail may request a new ballot in writing until 5 p.m. on the Thursday before an election. The clerk will spoil the first ballot and send a new ballot.  The voter can also request to have the second ballot spoiled and receive a third ballot sent, again prior to the deadline.

As a practical matter, voters attempting this one week before Election Day seriously risk having their vote not count.

In Minnesota, a person who has voted absentee by mail or early in person can change their vote (they can contact their county elections office to have their ballot spoiled and get a new one)

BUT the deadline for that was October 20, 2020. It is no longer possible to change one's vote.

Yes, they (voters) can request another absentee ballot or vote in-person.

Even if you request or cast an return an absentee ballot, you may still go to the polls and vote in person. The Election Law recognizes that plans change. The Board of Elections is required to check the poll book before canvassing any absentee ballot. If the voter comes to the poll site, on Election Day or during early voting and votes in person, the absentee ballot is set aside and not counted.

Is it 'most' states?

According to Matthew Weil from the Bipartisan Policy Center, this not the case.

"It is definitely not most states," he said. "Because we do know that at least half the states are doing - processing the votes as we speak. They’ve already started. So we can tell you right now that in most states that is not an option for voters.”