Fact-checking some of the top claims President Trump made on voting, ballots during the first presidential debate

The first night of the presidential debates are over, and our Verify team has been fact-checking some of the biggest moments. This week? All things voting.

With the first presidential debate of 2020 completed, lots of misinformation is floating around online.

To help get to the bottom of what's true and what's not, the VERIFY team is fact-checking the claims made by both candidates during last night’s debate.

This week's focus? All about voting and casting your ballot. With the election just a month away, President Trump used the debate to talk about potential voter fraud, claiming ballots are being sold and thrown out.

Let's get started on breaking those claims down.

Were there ballots that were thrown out in Pennsylvania with Trump's name on them?

Viewers asked us to look into President Donald Trump’s claim about discarded military ballots in Pennsylvania-- that he says were casting votes for him.

"Just last week, a number of discarded military ballots were discovered in Pennsylvania.," he said at night one of the debates. "All of the recovered ballots -- there were ballots that were thrown out -- had been cast for a person named Donald J. Trump."

And we can Verify: this claim is partially true.

Sources: The U.S Attorney’s Office of the Middle District of Pennsylvania, and the FBI.

In a release, the U-S Attorney said, “We can confirm that a small number of military ballots were discarded. Investigators have recovered nine ballots at this time.”

The release goes on to say FBI investigators found seven of those ballots were cast for President Trump -- with the contents of the other two are unknown.

Verify researchers also found a letter the U.S. attorney sent to the Luzerne County District Attorney, where the incident took place. It details how the ballots were found, saying they had been improperly opened, removed and discarded or separated from their envelopes. According to the U-S Attorney, Pennsylvania law requires military ballots be stored, unopened, until the morning of Election Day.

So we can Verify that yes, several military ballots were discarded in Pennsylvania.

RELATED: VERIFY: In DC, Maryland, Virginia your mail-in ballot signature does not have to match your DMV signature

Are there reports of mail carriers selling ballots in West Virginia? 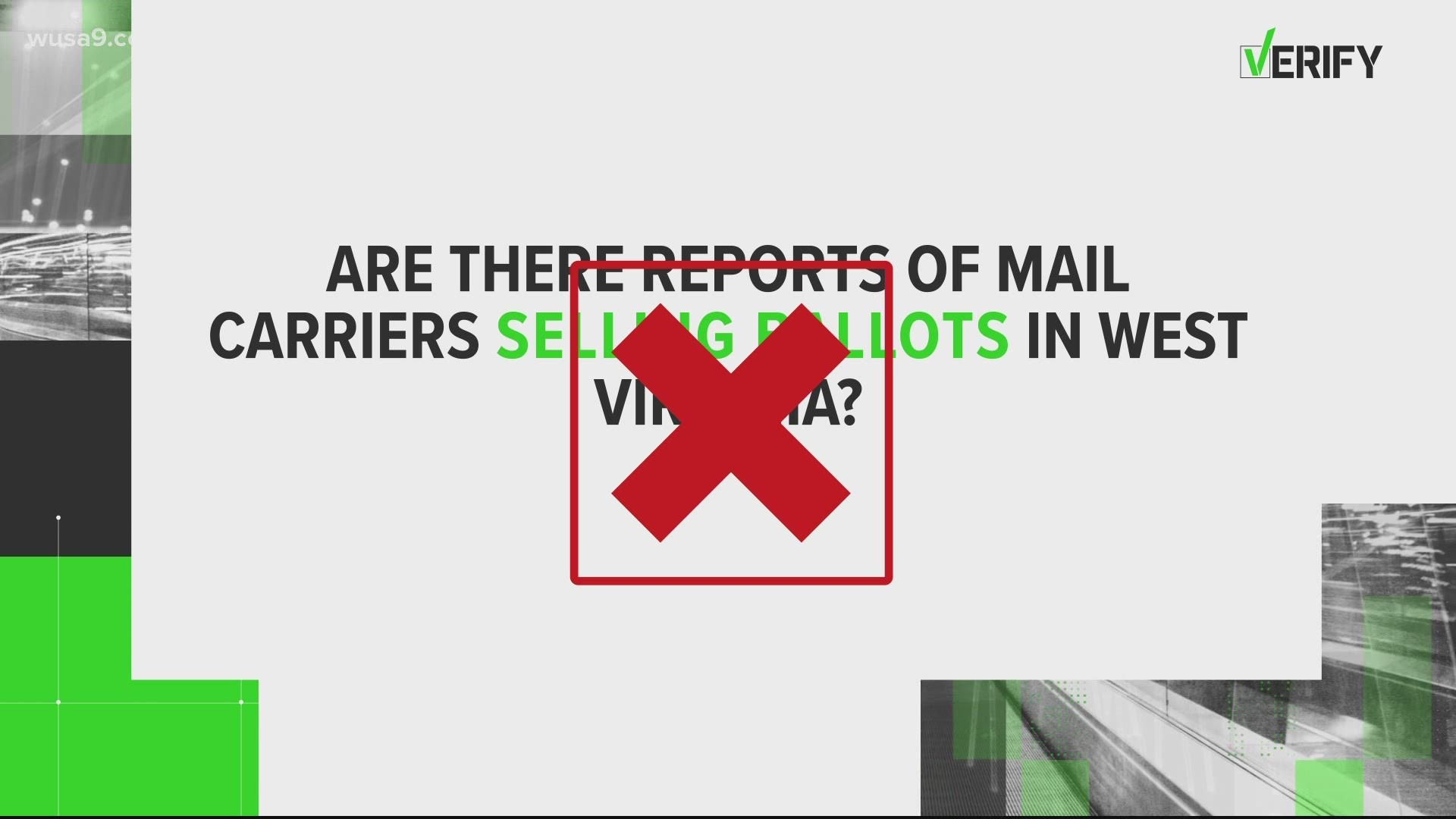 Another claim from the first night of the debates also featured missing ballots, only instead of being thrown out, they were allegedly sold.

“They have mailmen with lots of- did you see what’s going on," President Trump said in the debate. "Take a look at West Virginia, mailmen selling the ballots. They are being sold.”

Sources: The Secretary of State’s Office and the Office of the State’s Attorney General.

We can Verify: This claim is false. There are no current reports of mail carriers selling ballots in West Virginia.

A spokesperson for the Secretary of State told us in an email statement, “Those events never took place in West Virginia." Both offices referenced a case earlier this year.

But our sources from the Secretary of State's Office and the State's Attorney General said this person was not accused or convicted of selling ballots. Both offices say they have measures in place to help them identify election fraud quickly.

Were there really poll watchers in Philadelphia who were told they were not allowed to watch early voting? 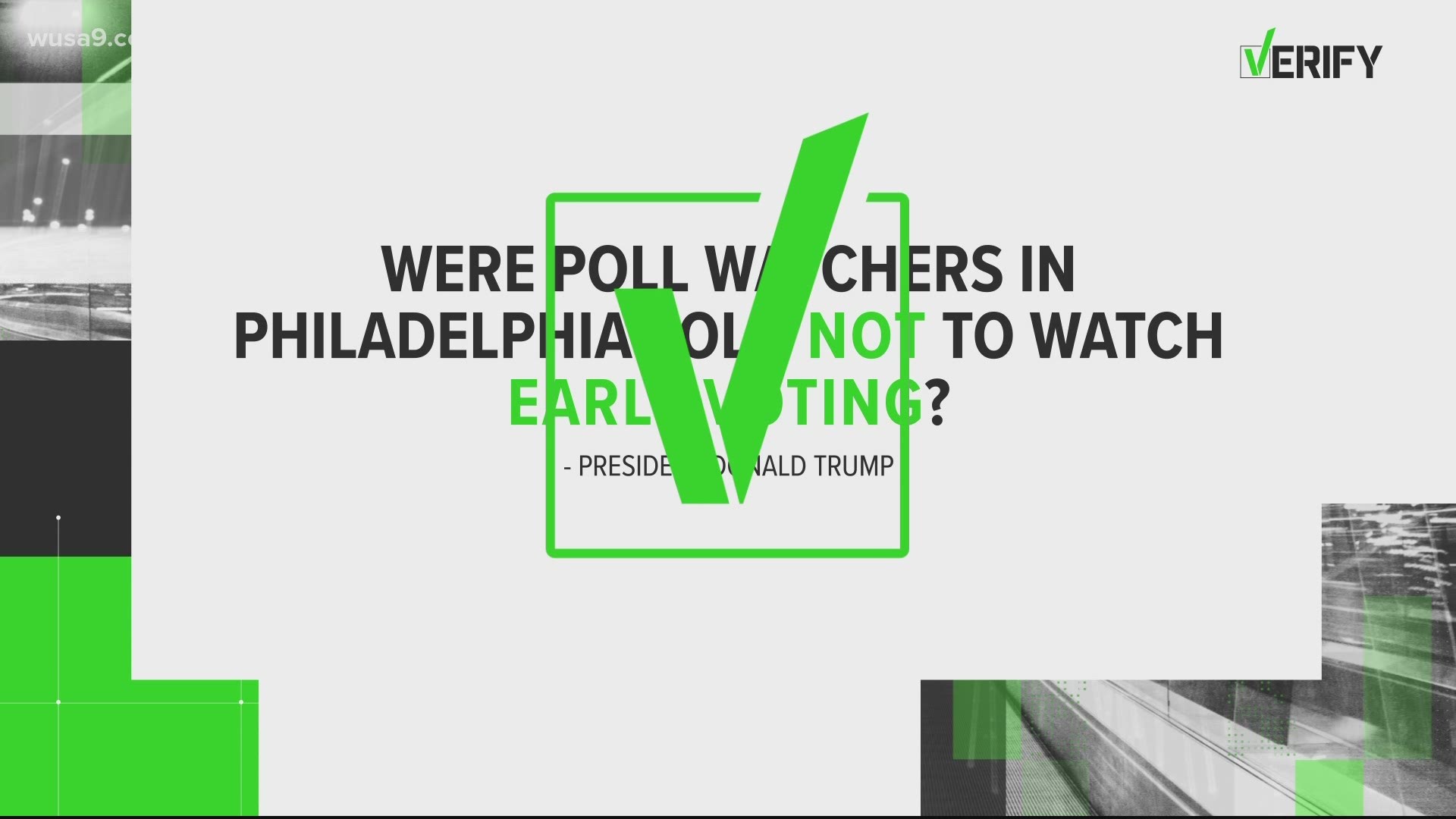 President Trump was asked whether he would pledge not to declare victory until the election was independently verified. Here's part of his answer from the first night of the debate:

So we're Verifying: Were poll watchers in Philadelphia told they were not allowed to watch early voting?

Sources: We took this straight to the people who make the rules -- the Philadelphia City Commissioners.

They said early voting is done at Board of Election Satellite Offices, not polling places. Residents are also there to register to vote.

An email statement from the PCC says in part, "Poll watcher certificates have not been issued for any individuals for anything other than poll-watching activities on Election Day at polling places... Individuals not seeking to receive services from a Sattelite Office are not permitted to be there..."

So we can Verify that it's true, poll watchers are not allowed at these satellite offices. But that’s because their certificates are only good for polling places on Election Day.

Is it true some states are counting ballots up to 7 days after the election?

Another claim made by President Trump during the debate revolved around when ballots would be counted.

“Can you imagine where they say you have to have your ballot in by November 10th. November 10th, " he said. "That means that’s seven days after the election, in theory, should have been announced. We have major states with that.”

So, is it true some states are counting ballots up to seven days after the election?

Sources:  Vote.org, which describes itself as a nonpartisan non-profit.

Websites for various states across the country.

In many states, like Florida, Massachusetts, and Hawaii, your mail-in ballot needs to arrive by Election Day to count.

In states like Minnesota and New York, they’ll be accepted up to seven days after November 3rd, as long as they’re postmarked on Election Day. And in California,  if your ballot is postmarked by Election Day, it will be counted up to 17 days AFTER the election: November 20th.

In DC and Maryland, your ballot must be postmarked by Election Day -- and received by November 13, ten days after Election Dau.

So we can Verify that President Trump’s claim is true, states will be accepting ballots after Election Day. But they'll still be counted.