The lawsuit alleged the former president had "inflamed, encouraged, incited, directed, and aided and abetted, forced its way over and past the plaintiffs." 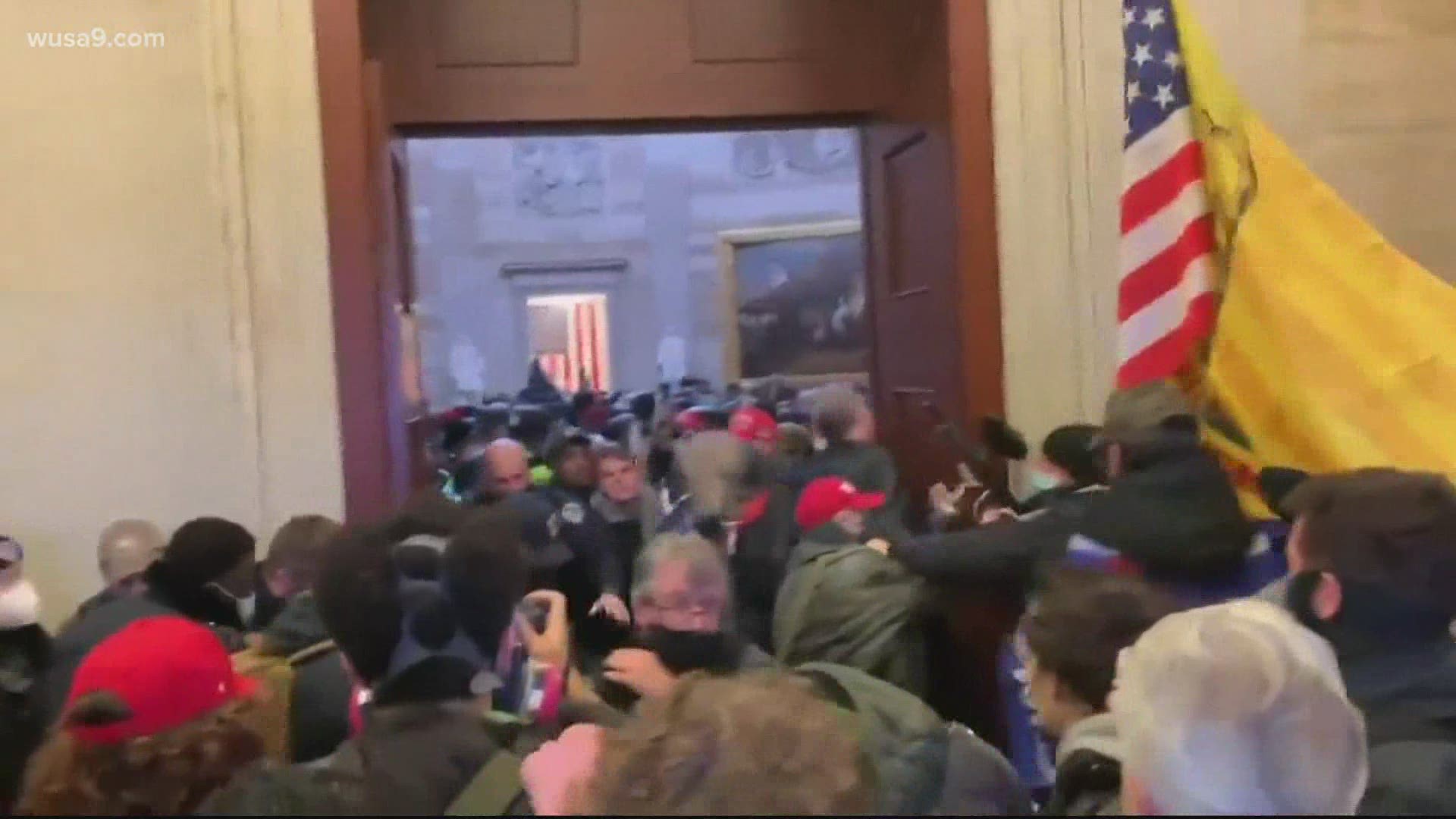 The lawsuit alleges Trump incited the riot to overturn the results of the 2020 Presidential Election. Officers James Blassingame and Sidney Hemby say Trump "inflamed, encouraged, incited, directed, and aided and abetted" the mob that burst through the Capitol not just on the day of his speech, but in the weeks leading up to the rally.

In the 40-page complaint filed in D.C. federal court on Tuesday, the officers described being overwhelmed, outnumbered and powerless when the mob of rioters swarmed the Capitol.

The lawsuit alleges Trump aided, abetted and directed assault and battery committed by the rioters, and also that he's liable for violating D.C. laws prohibiting inciting a riot and disorderly conduct.

The suit cites a number of instances it describes as Trump working up his followers for the eventual assault on the Capitol, including a moment during the first presidential debate when he told the Proud Boys to "stand back and stand by."

"Minutes later, the Chairman of the Proud Boys, Enrique Tarrio, posted a message on Parler... saying, 'Standing by, sir,'" the complaint says. "The Proud Boys would go on to become a core group of January 6 insurrectionists."

Earlier this month, a federal grand jury indicted four leaders of the Proud Boys on charges alleging they planned the Capitol riot and worked to hide their involvement to avoid law enforcement detection. The Justice Department has also said an Oath Keeper leader, Kelly Meggs, bragged in social media posts about forming an "alliance" between militia groups and the Proud Boys ahead of January 6.

The lawsuit also says a December 19 tweet by Trump in which he announced a January 6 protest in D.C., which he said "will be wild," was taken by his followers as a "literal call to arms."

"For example, within minutes of Trump posting this tweet, it was shared on a pro-Trump website called TheDonald.win, with the title: 'Trump Tweet. Daddy Says Be in DC on Jan 6.,'" the lawsuit says, adding that one user responded, "I will be open carrying and so will my friends. We have been waiting for Trump to say the word. There is [sic] not enough cops in DC to stop what is coming."

According to the lawsuit, on January 6, both Hemby and Blassingame were assigned to civil disturbance units, which they say was unusual for both of them. Hemby says in the suit that he never received a briefing on January 6 about what he and his fellow officers should expect.

In a new lawsuit, @CapitolPolice Officer James Blassingame describes the continuous assault from Trump supporters during the #CapitolRiot as they beat him, slammed him against a stone column and repeatedly called him racial epithets. pic.twitter.com/l1qDzZ3lEo

Hemby and Blassingame say they watched Trump supporters amass near the Capitol, and saw the crowd begin to chant "fight like hell" and "fight for Trump" as Trump was giving a speech in which he told supporters, "We will never concede," and "If you don't fight like hell, you're not going to have a country anymore."

Once the riot began, the complaint says Hemby, an 11-year veteran of the force, says he was crushed against the doors trying to hold the insurrectionists back and suffered cuts and abrasions on his face and body as a result. The complaint accuses the rioters of hitting Hemby with their fists and whatever object they had in their hands, throwing items and spraying him with chemicals that irritated his eyes, skin and throat.

"Officer Hemby was attacked relentlessly," the complaint says. "He was bleeding from a cut located less than an inch from his eye. He had cuts and abrasions on his face and hands and his body was pinned against a large metal door, fending off attacks. His primary focus was to survive and simply get home."

Blassingame, who's been with Capitol Police for 17 years, said in the lawsuit that a "surge of insurrectionists" slammed him against a stone column. He said he was unable to move because he struck his spine and the back of his head. Much like Hemby, the mob used their fists and other items like flagpoles to hit him, the lawsuit says.

He also alleges that Trump followers repeatedly hurled racial slurs at him while he was under attack, and that they taunted him and other officers, saying, "There's a [expletive] million of us out there. And we are listening to Trump – your boss."

"Foremost in Officer Blassingame's mind was the terrifying certainty that the insurrectionists were interested in him and the other officers not going home to their families that night," the complaint says.

Blassingame says Trump supporters hit him in the face, head, chest arms and "what felt like every part of his body. Insurrectionists used their fists and had weapons that ranged from flagpoles to stanchions and building directional signs, water bottles and other objects he could not identify."

The lawsuit also says Blassingame's family was able to see what was happening to him throughout the day in media coverage, but that he was unable to communicate with them or comfort and reassure his wife and family.

This is the first time officers are filing a lawsuit against Trump for the insurrection. Since the attacks, both officers described the emotional toll it has left.

Blassingame suffered injuries to his head and back and continues to have pain in his back, according to attorneys.

"[Blassingame] is haunted by the memory of being attacked, and of the sensory impacts – the sights, sounds, smells and even tastes of the attack remain close to the surface," the lawsuit states. "He experiences guilt of being unable to help his colleagues who were simultaneously being attacked; and of surviving where other colleagues did not."

The violent riot resulted in the death of five people, including Officer Brian Sicknick.

Hemby said he is under the care of medical specialists to treat his injuries and continues to "sleep poorly and feels hyper-aware and on high alert during his waking hours."

The lawsuit is asking for "compensatory damages in an amount consistent with the evidence to be shown at trial, in excess of $75,000 for each of them, plus interest and costs."

In a statement, a USCP spokesperson said confirmed the officers' employment to WUSA9 and said they were "acting individually from the Department."