Chansley pleaded guilty to one count of obstruction of an official proceeding. The DOJ says he faces 41-51 months in prison. 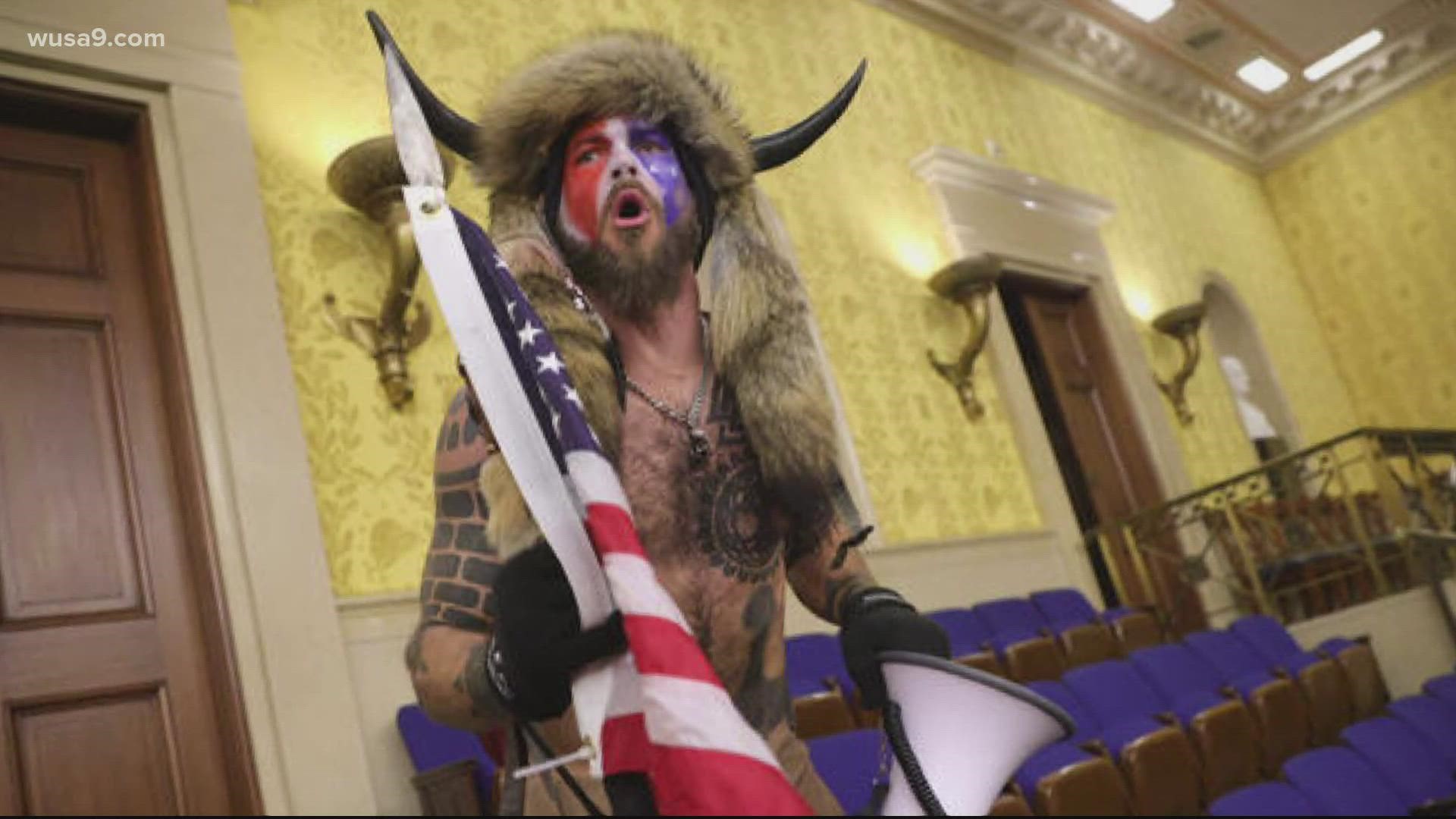 WASHINGTON — Jacob Chansley – the Arizona man who earned the moniker “QAnon Shaman” after entering the U.S. Senate Chamber wearing a horned fur hat and wielding a spear on January 6 – pleaded guilty Friday to one count of obstruction of an official proceeding.

Chansley appeared before Judge Royce C. Lamberth Friday morning to enter a guilty plea on the single felony count. Chansley was under indictment on six counts in connection with the riot, including civil disorder, entering a restricted building and obstruction of an official proceeding – a felony charge with a maximum sentence of up to 20 years in prison.

The plea deal Chansley and his attorney, Albert Watkins, reached with the government significantly lessens his potential prison time to an estimated range of 41-51 months. Chansley will also receive credit for the eight months he has already served since his arrest.

Before accepting his plea, Lamberth ruled Chansley was competent to stand trial. He had previously ordered a psychiatric evaluation which, according to Watkins, revealed Chansley suffers from a number of conditions, including bipolar disorder and depression. Watkins said the evaluation corroborated a similar diagnosis Chansley received while serving in the U.S. Navy.

Chansley, who spoke little during the hearing, thanked Lamberth prior to entering his plea.

“I’m appreciative of the court’s willingness to have me and my mental vulnerabilities examined," he said.

Chansley has been held in federal custody since his arrested just three days after the riot. His detention has been marked by requests for organic foods to accommodate his shamanic diet and, ultimately, transfer to a federal facility in Colorado for the competency evaluation.

Watkins said Chansley's time in Colorado, and away from the strict COVID-19 protocols in the D.C. Jail, allowed him to "regain his acuity." He asked Lamberth on Friday to release Chansley while he awaits sentencing so he can continue to receive psychiatric care.

“He was not a planner. He was not violent. And he has been cooperative at all times," Watkins said. “The events of January 6 will always remain, but the real truth of January 6 will be how our justice system employed patience and compassion for those with mental health vulnerabilities.”

Credit: AP
FILE - In this Wednesday, Jan. 6, 2021 file photo supporters of President Donald Trump are confronted by U.S. Capitol Police officers outside the Senate Chamber inside the Capitol in Washington. Jacob Anthony Chansley, the Arizona man with the painted face and wearing a horned, fur hat, was taken into custody Saturday, Jan. 9, 2021 and charged with counts that include violent entry and disorderly conduct on Capitol grounds. (AP Photo/Manuel Balce Ceneta, file)

Lamberth took the request under advisement, and promised to rule on it promptly. He set a sentencing hearing for Chansley for November 17 in D.C.

In the months since his arrest, Chansley has become one of the most recognizable members of the mob that stormed the Capitol thanks to his “unmistakable outfit,” as Lamberth put it earlier this year. Video captured on January 6 shows Chansley, standing in the spot where a short time earlier Vice President Mike Pence had been presiding over the joint session of congress, using a bullhorn to lead a prayer. Afterward, Chansley left a written note for Pence, reading, “It’s only a matter of time, justice is coming!”

Although Chansley has come to be publicly associated with the QAnon conspiracy theory – not the least of which due to the multiple photos of him holding a “Q Sent Me!” sign at previous rallies – in a statement sent to WUSA9 on Thursday, his attorney, Albert Watkins, says Chansley has “repudiated” those beliefs.

In a press release, "QAnon Shaman" Jacob Chansley's attorney, Albert Watkins, says his client wants to be accountable for his actions and has "repudiated" the QAnon conspiracy theory he's come to be associated with. #CapitolRiot @wusa9 @EricFlackTV pic.twitter.com/ZY5bI8R7bB

“Mr. Chansley, a long avowed and practicing Shaman, has repudiated the ‘Q’ previously assigned to him and requests future references to him be devoid of use of the letter ‘Q’,” Watkins wrote.

In a press conference Friday afternoon, Watkins said Chansley had become enamored with the QAnon conspiracy theory through social media and during rallies for former President Donald Trump -- in whom he saw a kindred spirit.

“He felt like Trump was picked on as he had been picked on," Watkins said.

“Jake was, like a lot of Americans, in a position of feeling that his voice wasn’t being heard," Watkins said. "For the first time, he felt like there was a politician whose message he heard. Who he felt was being spoken to him. He felt a fondness for Trump that was not unlike a first love."

Watkins also said Chansley's faith in Trump – which brought him to D.C. on January 6 in the first place – also kept him believing for months, even after Trump left office, that he would be getting a pardon. Watkins said Chansley's mother shared that belief and, as a result, urged him not to take a plea deal.

"This is a man who was under a great deal of familial pressure not to take a plea because President Trump was going to reassume office and, my goodness, pardon him!" Watkins said.

Watkins also acknowledged that, despite the progress he said he's seen in Chansley, he was still not freed from his previous QAnon beliefs.

“Has he extricated himself so that his boots don’t smell of QAnon?" Watkins said. "No. No, it's still there. And it’s going to take time.”