In the first interview, Pezzola's family calls his ongoing pretrial detention unjust: "We miss our father and we want him home." 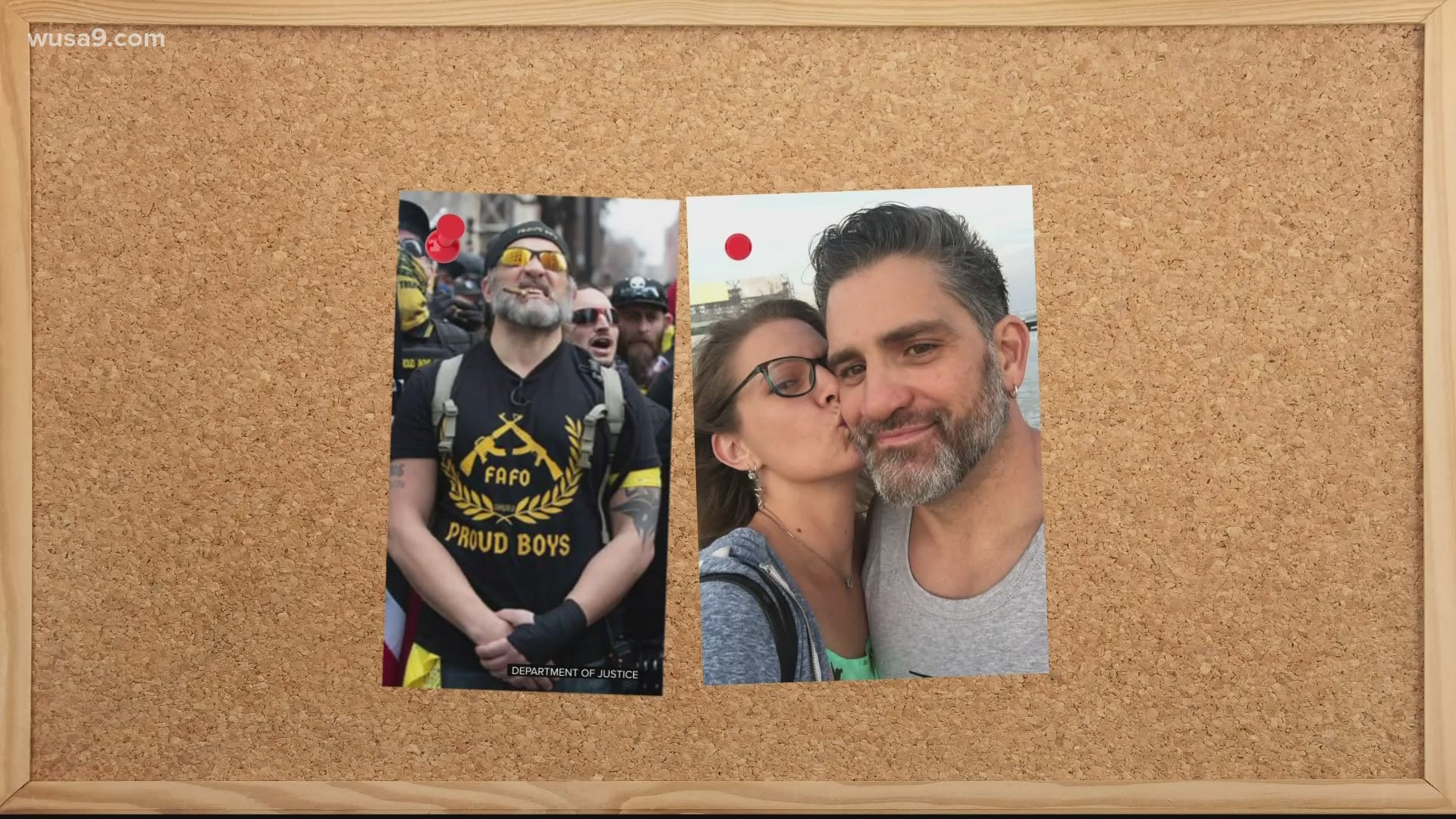 WASHINGTON — For a moment, Dominic Pezzola was one of the most recognizable men in America.

Prosecutors referenced Pezzola – a 43-year-old flooring contractor from Rochester, New York – by name 12 times during the second impeachment trial of former President Donald Trump. A video clip of him using a stolen police riot shield to bash in a window at the U.S. Capitol building during the Capitol riot on January 6 was played repeatedly during the trial and on television news. In a hearing, a federal judge called him “the tip of the spear that pierced the United States Capitol.”

Pezzola was arrested in New York on January 15 and indicted by a grand jury on 11 counts – among them conspiracy, assaulting a federal officer and destruction of government property – along with another man, 31-year-old William Pepe.  In April, a grand jury returned a superseding indictment adding a third co-defendant, 33-year-old Matthew Greene. All three men are accused of being affiliated with the New York chapter of the Proud Boys. In late December, Proud Boys chairman Enrique Tarrio posted a group photo with the caption “Lords of War” – a photo that featured Pezzola prominently.

Credit: Department of Justice
A screenshot of a post from Proud Boys chairman Enrique Tarrio showing Dominic Pezzola and captioned "Lords of War."

Since the impeachment, however, the spotlight has moved away from Pezzola’s case. Subsequent indictments against other Proud Boys accused in the actual organization and planning of January 6 – men like alleged Proud Boy leaders Ethan Norden and Joseph Biggs – haven’t mentioned Pezzola, or only do so in passing. Meanwhile, federal judges have repeatedly declined his motions to be released from pretrial detention in the D.C. Jail, where he has been confined since his arrest in January. That’s left the bulk of the burden in preparing his defense to his long-time partner, Lisa Magee, and a pair of new attorneys he’s hired to represent him.

Magee is a former social worker who – in a twist of irony she hasn’t missed – used to work in pretrial services. She and Pezzola have been partners since they met 20 years ago at a birthday party. They have two children together, 20-year-old Maria and 16-year-old Angelina. Up until his arrest, Pezzola was the family’s only breadwinner.

Magee agreed to a sit-down interview at the New York City law offices of the two new attorneys Pezzola has hired to represent him, Martin Tankleff and Steven Metcalf. All three were present for the interview to talk about what they see as the “tragedy” of Pezzola’s continued detention.

“It was a broken window,” Magee said. “Everywhere in the United States of America, breaking a window is a criminal mischief charge. Anybody anywhere that broke a window wouldn’t even likely be arrested. They would be given an appearance ticket.”

Pezzola is charged with much more than breaking a window. The indictments against him allege he and other Proud Boys conspired to travel to D.C. to disrupt the certification of Electoral Ballots on January 6, and that as part of that conspiracy they used an encrypted radio channel and made plans to obscure their identities.

Credit: WUSA9
Lisa Magee talks about the ongoing detention of her partner, Dominic Pezzola, in connection with the Capitol riot.

During the riot, federal prosecutors say Pezzola and other Proud Boys stormed past police lines and fallen barricades and, in Pezzola’s case, ripped a riot shield from a Capitol Police officer’s hands.

They say Pezzola threatened police, yelling at them, “We ain’t stopping. You think Antifa’s [expletive] bad, just you wait!”

In the now infamous video, Pezzola can be seen repeatedly smashing a window with a riot shield until it breaks – allowing himself and other rioters to enter the building. Once inside, prosecutors say Pezzola posted a video of himself smoking a victory cigar. In one of the orders denying his release, a federal judge noted that Pezzola told investigators he smoked the cigar because “he considered the objective achieved, stopping the certification of the election pursuant to the instructions of the then President.”

Still, the window is, as noted in a March opinion by U.S. District Judge Timothy J. Kelly, a non-trivial matter. Because of the window, Pezzola is charged with felony destruction of property. Because the damage is estimated at being $1,000 or more, the charge comes with a potential maximum sentence of 10 years in prison. And, most importantly for Pezzola’s defense team, it is considered a federal crime of terrorism and a crime of violence. That’s a critical component of the 1984 Bail Reform Act that governs which federal defendants can be held in jail pending trial.

“Obviously we realize there’s much more to these charges than just breaking a window,” said attorney Steven Metcalf. “The breaking of the window has been emphasized because that has been highlighted all the way up to the D.C. Court of Appeals, where the Munchel decision has basically broken down categories and spoke about those who did property damage as those individuals who should not be afforded bail. What we want is the ability to zealously and vigorously defend against these charges. We’re talking about one of, if not the largest, federal investigation in our history, where there are thousands and thousands of documents that are going to be poured on us. We want the ability to be able to gear up in a fair way for trial, should this case get to that level.”

Metcalf and his co-counsel, Martin Tankleff, say Pezzola’s detention in the D.C. Jail – where he and other Capitol riot defendants have been held on 23-hour-a-day lockdown since their arrests due to COVID-19 protocols – poses a significant hindrance to his, and their, ability to mount a competent defense.

For Magee and her daughters, who, in a written statement to WUSA9, called Pezzola “the rock of our family,” the ongoing detention of her partner isn’t just hurting his potential defense – it’s deteriorating her family.

“Him and my youngest daughter have a bond like no other,” Magee said. “She has gone form a straight-A student to D’s and F’s. My children have lost friends. People have turned their backs on children.”

To those who might hear her complaints and say Pezzola deserves the situation he’s found himself in, Magee says January 6 was just “a single day.”

“A single day does not determine a man’s entire life,” she said.

At Metcalf’s advice, Magee declined to answer whether she had ever tried to dissuade Pezzola from going to D.C. on January 6

Before Metcalf and Tankleff came onboard, Pezzola seemed like he was headed for a swift plea deal.

In a February filing by Pezzola’s former attorney, Jonathan Zucker, the Marine-turned-Proud Boy claimed he was “consumed with guilt” over his participation in the Capitol riot and that he sought to make amends.

“Since his arrest, having time to reflect and see how things have revealed themselves, he now realizes he was duped into this mistaken beliefs,” Zucker wrote. “As a result of his actions, he has left his wife, children and employees in a precarious and likely disastrous position. He is consumed with guilt for having done so… Pezzola is the sole source of financial support for the family which consists of his wife and two children. His inability to support the family while incarcerated has placed them all in desperate financial straits. Pezzola regrets his decision to participate in the events of January 6. He disavows and seeks to sever any relationship and involvement in future activities of the Proud Boys or any similar groups.”

Credit: Department of Justice
A photo allegedly showing Dominic Pezzola, in the center in a grey jacket, inside the U.S. Capitol building on January 6, 2021.

Zucker also said in the mid-February filing that Pezzola was interested in beginning plea deal negotiations.

“He simply wishes to be released under reasonable conditions so he can return to work, support his family and return to being a law-abiding citizen,” Zucker wrote. “He recognizes that he will at some point have to suffer some punishment for his actions, notwithstanding that they were undertaken with honorable but misguided intentions.”

All of that is now out, according to Metcalf, who said the new defense team is not engaging with Pezzola’s former renouncement of his actions.

Metcalf also said he and Tankleff have not entered into plea negotiations with the Department of Justice, nor is it something they’ve discussed.

While Metcalf focused on the technical aspects of Pezzola’s new bond appeal strategy – namely, the window charge – Tankleff took a notably different tactic in the interview. Pezzola, he said, was just another example of a “social justice” protester being targeted by the government.

“If you look at what’s happened over the last 18 months, two years, you have individuals across America who have decided to get involved in some kind of movement and use their voices,” Tankleff said, appearing to be drawing a line between the “Stop the Steal” protestors who stormed the Capitol on January 6 and Black Lives Matter protests across the country last summer. “What happened on January 6 was no different than what we’ve seen across America over the last 18 months when we’ve seen people be outspoken.”

Asked if that argument was a stretch, Tankleff said no.

“What’s happening here is that the government is trying to crush the voices of a number of individuals who have a constitutional right, a First Amendment right, to voice their opinions,” Tankleff said.

The attorneys may have an uphill battle to persuade an appellate judge of that, however, if Judge Timothy Kelly’s most recent opinion is any indication. In it, Kelly described a defendant he saw posing a continued threat to the public if he was released.

“In sum, the proffered evidence shows that Pezzola came to Washington, D.C., as a key member of a broader conspiracy to effectively steal one of our Nation’s crown jewels: the peaceful transfer of power,” Kelly wrote. “He then played a prominent role in using violence to achieve those ends by, among other things, robbing a police officer of his or her riot shield and breaking a window of the Capitol to allow rioters to enter. Because of all that, he is charged with very serious crimes that subject him to very serious penalties.”

Neama Rahmani, a former federal prosecutor, agreed with Kelly that Pezzola should stay in jail, despite his lack of a prior criminal history.

“Even though their past may have been clean, and there was really no sort of criminal conduct like this, the actions in this case were so egregious and so outrageous, it would be very difficult for a judge to release the most violent of these individuals back into the community,” Rahmani said.

While they await the latest appeal, in Rochester, New York, Magee and her children are facing the prospect of Father’s Day and an upcoming birthday without Pezzola. Magee said she knows Pezzola feels guilty for not being at home with his family, if not for his alleged actions on January 6.

“I would have never predicted that this is where I would be today. But life throws us curveballs, and we have to stand by the ones we love and stay strong,” Magee said. “I have two amazing children and an amazing partner, and we’re going to make it through this. We’re going to stick together. As hard as it may be. That’s what families do.”