Thomas Webster, 54, of New York, could face 10 years or more in prison for allegedly attacking an MPD officer on January 6. 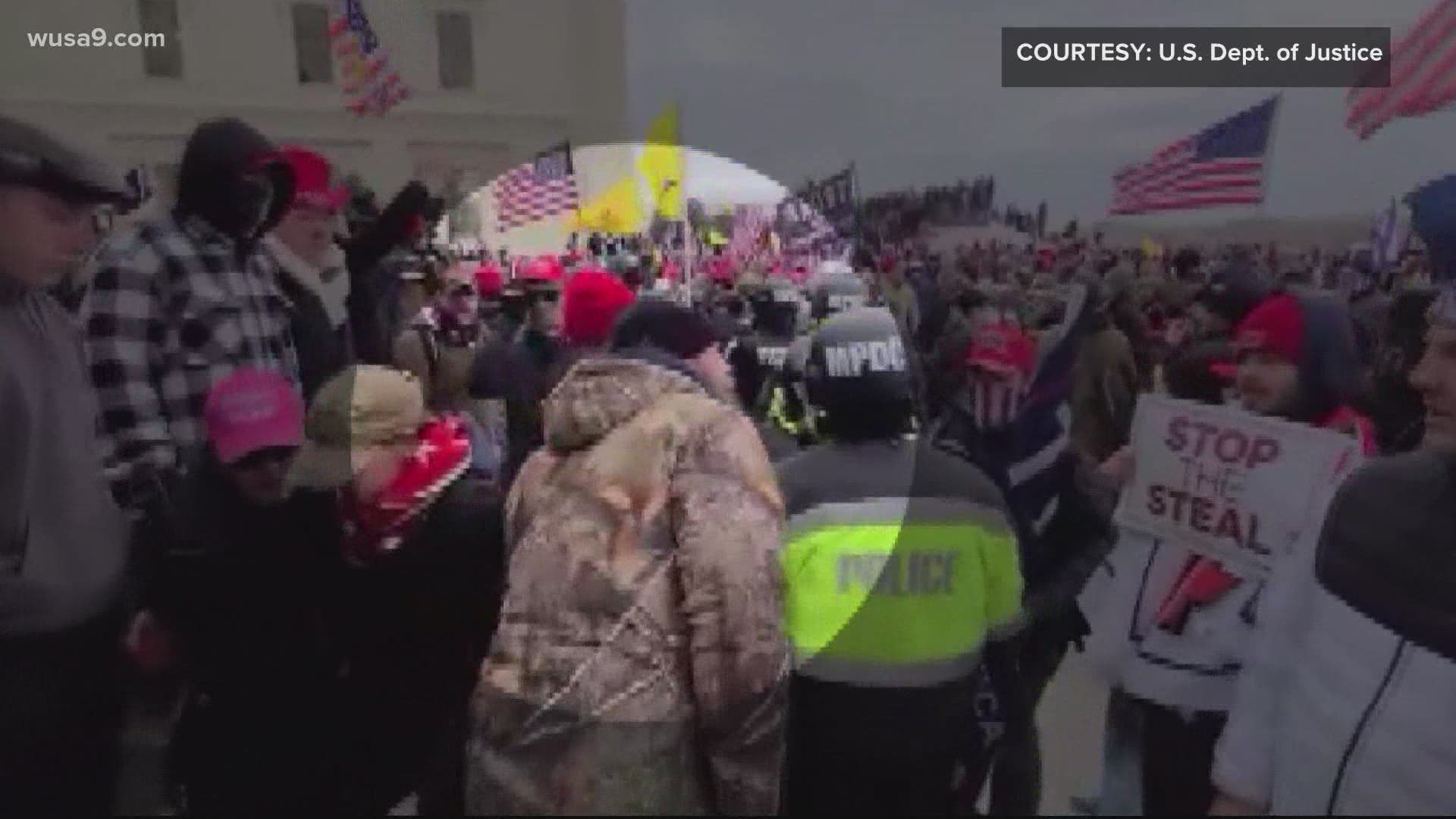 In the new footage, a man prosecutors have identified as Thomas Webster, 54, of New York, can be seen angrily yelling insults and calling police “commies” before repeatedly assaulting them with a flag pole bearing the flag of the U.S. Marine Corps.

After the initial assault, the video show Webster and several other members of the pro-Trump mob breaking through police barricades and charging officers. Webster can be seen in a pitched struggle on top of an officer who was knocked to the ground.

The video was released late Thursday following an order by U.S. District Judge Amit P. Mehta. A coalition of newsrooms, including WUSA9, has been petitioning the courts for months in an ongoing effort to get more Capitol riot video released. Earlier this week, the coalition won the release of another series of videos showing a man identified by prosecutors as Patrick Edward McCaughey III, of Connecticut, assaulting police with a riot shield in the Capitol tunnels.

Webster, who retired from the Marine Corps as a corporal before serving 20 years with NYPD – including in a uniformed detail for former NYC Mayor Michael Bloomberg – faces multiple charges in connection with the riot, including assaulting federal officers using a dangerous weapon, civil disorder and engaging in physical violence in a restricted grounds wit ha deadly or dangerous weapon. The assault charge alone could carry up to 10 years in prison if Webster were to be convicted.

In an interview with prosecutors during the investigation, a D.C. Police officer said as Webster tried to rip off his helmet the officer was choked by his own chin strap, leaving him unable to breathe during the assault.

The charging documents also included a link to a YouTube video prosecutors said was taken shortly after the alleged attack in which Webster, wearing a body armor vest, looked into the camera and said, “Send more Patriots. We need some help.”

According to a transcript of an interview with FBI agents in late February, Webster claimed he had gone to D.C. to “show support.”

“Like, there was one last chance to maybe set things right, I guess, is the way to put it,” he said. “I just wanted to go down there and show the support."

#CapitolRiot: In an interview w/ the FBI, former Marine and NYPD officer Thomas Webster – accused of beating police with a flag pole – said he wore body armor to D.C. on Jan. 6 because he's seen "countless videos of people with my beliefs being assaulted." pic.twitter.com/KsMyRctD4M

Webster said he attended the rally alone and had no affiliation with the Oath Keepers, Proud Boys or any other groups since identified as having participated in the riot. Webster also reportedly said he knew the flagpole – which he brought with him from home – “would be perceived as a problem.”

Webster said in the interview that he was provoked when he felt he had been struck in the face by the officer – however, prosecutors have said in court that a review of all the available video hasn’t turned up any such attack.

“I felt like I was being attacked and I went forward towards the officer. I went over the… I remember the barrier falling over, ‘cause nothing was holding it up and I reacted that way…” Webster said.

Webster also told the agents that he was “playing it up” to the camera when he called to “send more patriots.”

Webster has been held in pretrial detention since his arrest in February. On Thursday, his attorney filed a new motion seeking his release. His next court appearance is a bond review hearing scheduled for June 29 at 2:00 p.m.