Jerod Hughes is asking a federal judge to let him out of jail, saying he is the sole provider for his daughter and disabled wife. 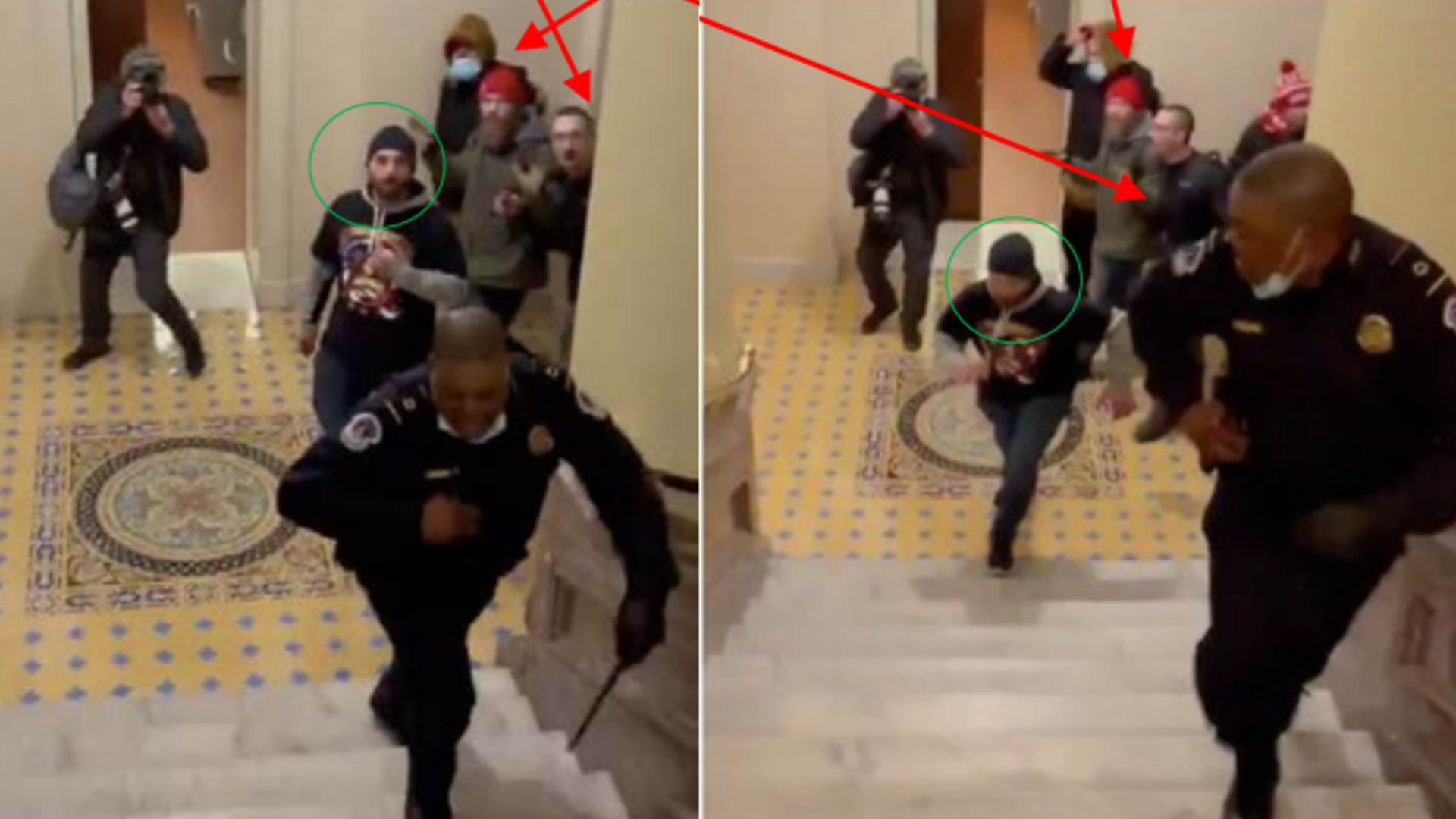 WASHINGTON — A Montana man accused of being at the front of the mob that chased Capitol Police Officer Eugene Goodman has asked to be released from custody – saying he was “duped” by former President Donald Trump and that he is unable to provide for his daughter and disabled wife.

Jerod Hughes, of East Helena, Montana, was indicted along with his brother Joshua on nine counts last month, including obstruction of an official proceeding, entering a restricted government building and civil disorder.

In court documents, the FBI says Hughes and his brother were among the first 10 rioters to enter the U.S. Capitol Building through a broken window. Once inside, investigators say Hughes and another man kicked a door until the lock broke so that other rioters could enter the Capitol.

Investigators say the Hughes brothers then pushed their way to the front of a mob that was chasing Goodman, despite his repeated commands to them to back up and leave the building.

“Rather, the rioters kept advancing toward Officer Goodman in a menacing manner – even as Officer Goodman retreated to recover a baton that had been dropped onto the floor. The video shows that Douglas Austin Jensen was the primary aggressor, followed immediately by Joshua Calvin Hughes and Jerod Wade Hughes.”

Hughes has been in federal custody since his arrest last month. On Wednesday, Hughes’ attorney filed a motion in district court in D.C. asking for his client to be released on house arrest so that he can return to work.

In the motion, Jonathan Zucker, Hughes’ attorney, says his client is a “hard-working responsible family man” and the sole financial supporter of the family, which includes a 14-year-old daughter and a wife who is completely disabled. Zucker says Hughes’ wife is scheduled for an upcoming surgery that will leave her “bedridden and completely dependent on defendant for all services during her recovery period.”

According to Zucker, Hughes’ ongoing incarceration is causing “grievous hardship on the family.”

Zucker says Hughes is not part of any organized group and that when he marched to the Capitol on January 6 he was following what he perceived as direction from Trump during his “Stop the Steal” rally speech.

“During President Trump’s speech he encouraged the attendees to march to the United States Capitol to protest the Electoral College certification of the vote for the 2020 Presidential Election,” Zucker wrote. “When then-President Trump encouraged the crowd to walk toward the Capitol, Defendant marched to the Capitol with the crowd, thinking he was protesting the election, which the President claimed had been fraudulently ‘stolen.’”

Goodman was hailed as a hero for his actions leading the violent mob away from Senate floor, including Hughes, his brother Josh, and a third man from Iowa, Douglas Jensen, all now criminally charged. Goodman now serves as Deputy Sergeant at Arms of the United States Senate.

Zucker says his client’s alleged activities must be viewed in “context” – namely, that he, along with millions of other Americans, was “duped” by Trump.

“The former President maintained that the election had been stolen and it was the duty of loyal citizens to ‘stop the steal’ by preventing the election certification,” Zucker wrote. “Although the claim appears to be baseless, it is apparent defendant was one of millions of Americans who were mislead by the former President’s deception. Defendant acted out of conscience, albeit one that was manipulated by deception. He thought he was standing up to protect his country, not attack it.:

Hughes was scheduled to be arraigned in federal court in D.C. Thursday afternoon. As of Thursday, the government had not yet responded to his request to be released on bond.