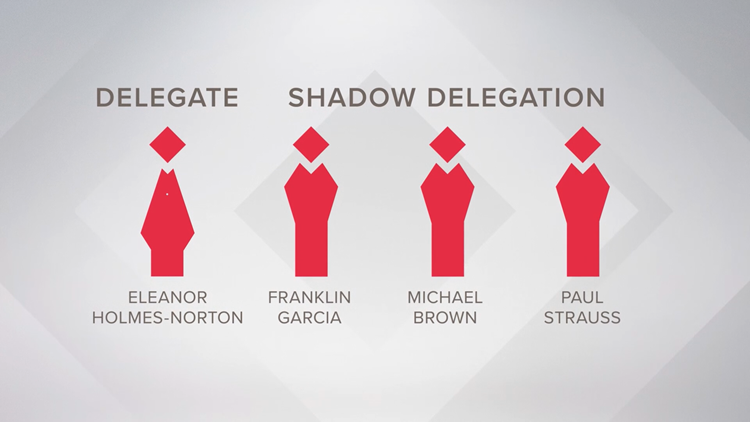 What does DC's 'shadow delegation' to Congress actually do?

WASHINGTON, D.C. -- Maybe you’ve heard of Washington, D.C.’s “shadow delegates” to Congress, but do you know what it actually does?

But that’s mostly where the similarities end.

Unlike the congressional delegation from, say, Maryland, D.C.’s shadow delegation isn’t allowed to vote – either in full floor votes or in committee. They also have their offices in the John A. Wilson Building, rather than in the Senate office buildings.

Former D.C. shadow senators include Jesse Jackson, who served from 1991-1997, and Florence Pendleton, who held the office from 1991-2007. The positions are currently held by Mike Brown and Paul Strauss, both Democrats. The District’s current shadow Representative is Franklin Garcia, also a Democrat, who has served since 2015.

So if they can’t vote, what do they do? Push for D.C. to become the 51st state (and, thus, for them to become fully vested members of Congress), mostly.

D.C. does send one other person to Congress you may have heard of: a non-voting delegate for its at-large congressional district. Democrat Eleanor Holmes Norton, a former chair of the Equal Employment Opportunity Commission, has represented D.C. as its non-voting delegate since taking office in January 1991.

Unlike her shadow counterparts, Norton may serve on committees and speak on the House floor. She may also sponsor legislation – even though she wouldn’t be allowed to vote on its final passage. Norton has used this ability to sponsor legislation like the District of Columbia House Voting Rights Act of 2009, which would have given D.C. a full voting representative in the House. That bill was approved by the Senate, but ultimately failed to pass through the House.