The ferry, which connects Loudoun County with Montgomery County, Maryland, is the last working ferry of 100 ferries that used to operate on the Potomac River. 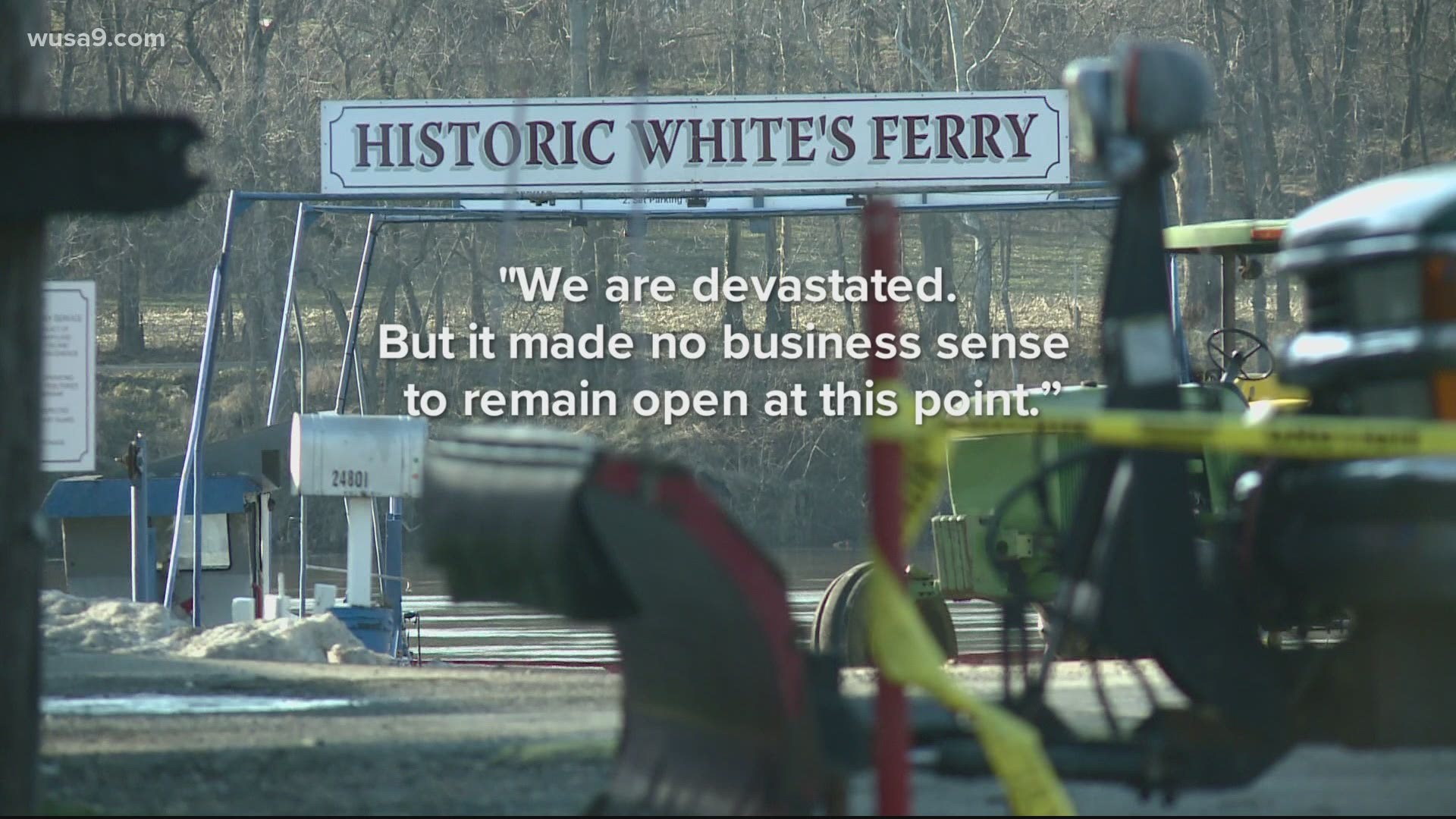 LOUDOUN COUNTY, Va. — After hundreds of years in operation, the owners of White’s Ferry announced Monday morning they have ceased operations effective immediately following a court ruling in Loudoun County.

In a recent Facebook post by White's Ferry's owners, the transportation service stated that a Loudoun Circuit Court ruling found there is "no record documenting the creation of a public landing on the Virginia shore."

"The Circuit Court of Loudoun County, Virginia has ruled, in the case of Rockland Farm, LLC, et al. v. White’s Ferry, Inc., that no public landing exists on the Virginia shoreline at White’s Ferry Road and the ferry is prohibited from landing at that location in Virginia," the owners said in the Facebook post.

In the social media post, the owners confirm that Loudoun County officials have declined to establish a public landing at that location. The ferry, which connects Loudoun County with Montgomery County, Maryland, is the last working ferry of 100 ferries that used to operate on the Potomac River.

Beginning operation in 1786, the first known ferry operation at the location was Conrad's Ferry in 1817. According to Loudoun County's history website, after the Civil War former Confederate officer -- Elijah V. White -- purchased it and made many improvements to the service.

White’s Ferry is a VITAL transportation connector between VA & MD.
There are only 2 bridges across 45 miles of the Potomac connecting Montgomery/Frederick Co MD to Loudoun/Fairfax Co VA
2.8 million people live in those 4 counties. @wusa9
🎥 TIMELAPSE
White’s Ferry 2/7/20 pic.twitter.com/ayy9PeijfC

The Town of Poolesville, Maryland published a statement to Facebook Monday morning calling the ferry “an integral part of the Western Montgomery County area, the connection to Northern Virginia, a historic treasure, and a vastly important piece of transportation infrastructure.”

According to the town's statement, Poolesville commissioners are working with both Montgomery County and Maryland state officials to try and keep the ferry open.

"The Poolesville Commissioners are actively working with Montgomery County and State of Maryland officials, in an attempt to keep the ferry operational. “The closing of this important transportation link,” Commission President Kerri Cook said. "The western part of the county is identified by a rich history and unique character and White's Ferry is an essential element of that Montgomery County history.”

Just received this statement from the Town of Poolesville, which says they're working with state and county officials to keep the ferry open. @Poolesville_MD @wusa9

Loudoun County said earlier they are working on a statement to send our way. pic.twitter.com/KF9CSxlzw8

Shortly after, officials with the Loudoun County government released a statement on the county's website in regards to the closing.

"The Loudoun County government is aware of published reports that imply White’s Ferry ceased operations due to the lack of an established public landing in Virginia. It is important to note that this legal matter is between a private property owner and the ferry operator and that Loudoun County it not party to the lawsuit. The county is issuing this statement to clarify misinformation regarding the county’s role in this matter," the statement reads.

Officials tell WUSA9 that while Loudoun County is not party to the legal dispute, the county remains concerned in regards to the outcome from a regional transportation perspective.

The county recognizes that any impact to ferry service may impact the residents and people who work in Loudoun County.