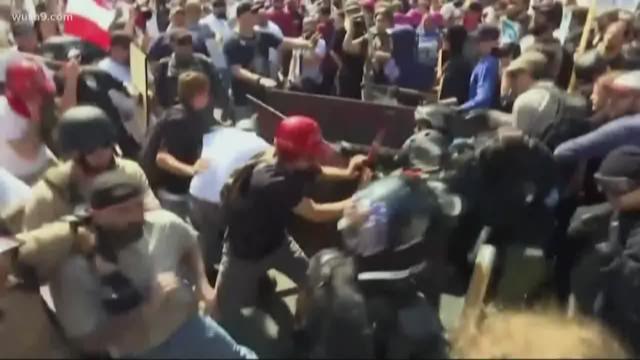 Former U.S. Attorney Tim Heaphy's monthslong investigation of the Charlottesville rally found that the city failed by not adequately communicating or coordinating in advance and by removing an officer from an area where a car plowed into counterprotesters and killed a woman.

RELATED: There could be another 'Unite the Right' rally in Charlottesville, organizers apply for permit

Heaphy's team interviewed 150 people and pored over half a million documents for the report, which found a lack of preparation and coordination between state and city police and a passive response by officers to the chaos.

The report said the city of Charlottesville had failed to protect public safety or the protesters' right to express themselves.

"This represents a failure of one of government's core functions_the protection of fundamental rights," the report said. "Law enforcement also failed to maintain order and protect citizens from harm, injury, and death. Charlottesville preserved neither of those principles on August 12, which has led to deep distrust of government within this community."

White nationalists who descended on Charlottesville in part to protest plans to remove a statue of Confederate General Robert E. Lee began fighting in the streets with counterdemonstrators before the event even officially began. The brawling went on for nearly an hour in plain view of officers until the event eventually disbanded. Later, as counterdemonstrators were peacefully marching through a downtown street, a car drove into the crowd, killing 32-year-old Heather Heyer and injuring many more.

The report says "planning and coordination breakdowns" before Aug. 12 led to "disastrous results."

"Because of their misalignment and lack of accessible protective gear, officers failed to intervene in physical altercations that took place in areas adjacent to Emancipation Park," the report said.

State police directed their officers "to remain behind barricades rather than risk injury responding to conflicts between protesters and counter-protesters," it said. And Charlottesville commanders "similarly instructed their officers not to intervene in all but the most serious physical confrontations."

State police and Charlottesville police were unable to communicate by radio the day of the rally because they were on different channels, the report said.

The review also found that an officer was initially supposed to be stationed near the intersection where the car plowed into counterprotesters. But the officer asked for relief out of safety concerns and was not replaced, he said.

Only a sawhorse was in place when the car drove into the crowd, killing Heyer and injuring at least 19 others. The day's death toll rose to three when two state troopers sent to monitor the scene and support the governor's motorcade died in a helicopter crash.

Virginia Gov. Terry McAuliffe, Police Chief Al Thomas and other top officials have previously defended the law enforcement response, saying police had to show restraint because some people in the crowd were heavily armed.

Rally organizers and counterprotesters, as well as some law enforcement experts, have questioned why authorities didn't do more to separate opposing forces or step in once the violence began breaking out.

RELATED: A deeper look into the organizer of the Unite the Right rally

City officials had tried to move the rally to a larger park about a mile (1.5 kilometers) from downtown Charlottesville, but their request was blocked by a federal judge after the American Civil

Heaphy served as the U.S. Attorney for the Western District of Virginia from 2009-2015, after being appointed by President Barack Obama.

The Republican Party of Virginia criticized the city's decision to hire Heaphy, arguing he should be disqualified from leading the review because of past political donations he made to Democratic candidates, including $200 to Charlottesville Mayor Mike Signer's campaign fund in 2015.

Heaphy has said his contributions would have no bearing on the review.