'The relief was just unbelievable' | This former Northern Virginia student paid off $60K in loan debt. Here's how

The thought of paying off student loans can be overwhelming. One former Fairfax County student created her own student loan guide to help graduates get started. 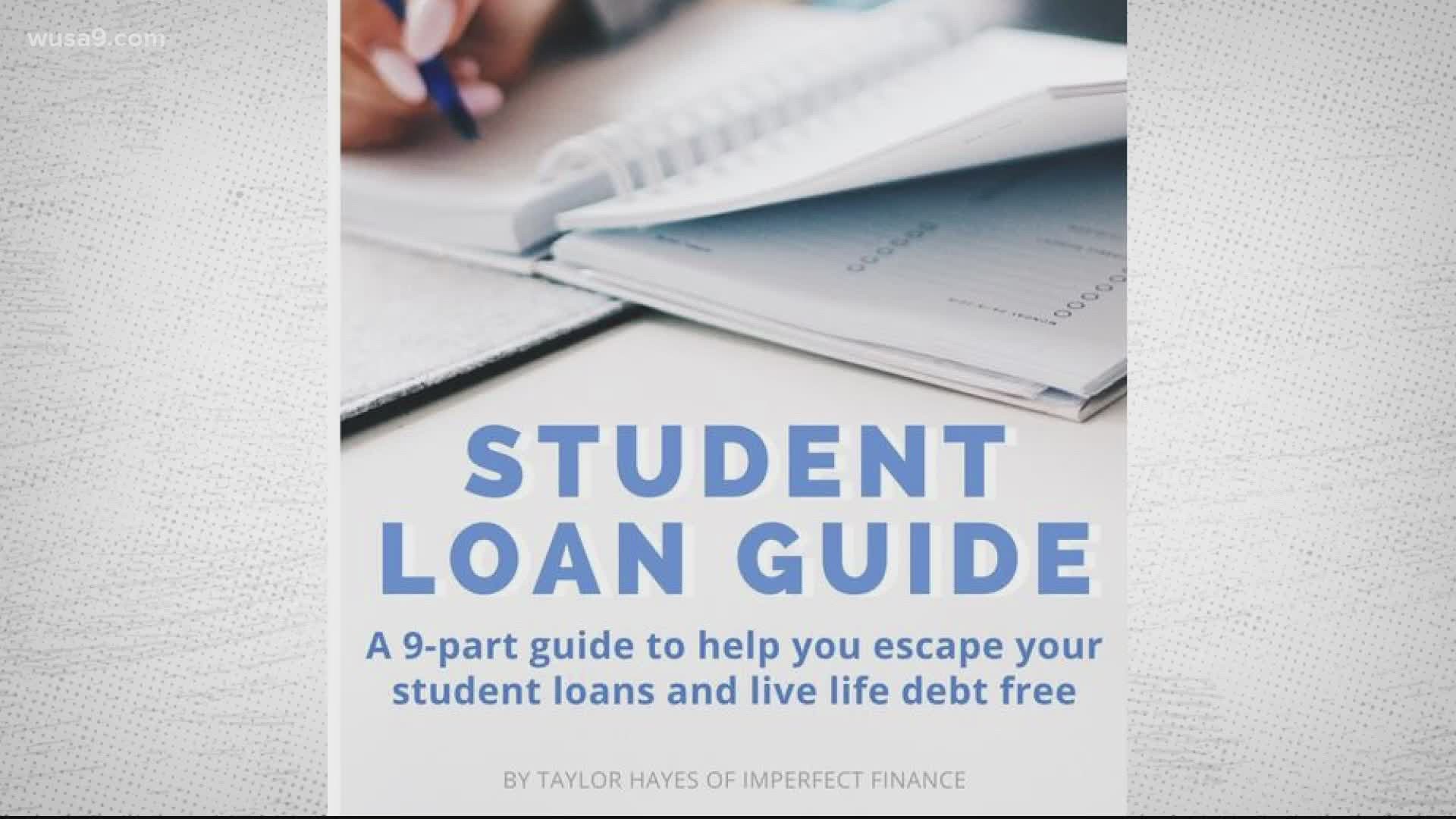 FAIRFAX COUNTY, Va. — It is an exciting time for graduating college seniors, but the stress of finding a job and paying off student loans can also be overwhelming. A Northern Virginia graduate knows the feeling well and is now paying it forward by helping others.

"I was not really thinking about my debt at all. I was just so excited to be celebrating. Then, November 2015 rolled around and I realized my student loan payments were starting to kick in. That was the first time I learned I owed over $60,000 in student loan debt," Hayes said.

Over the course of four and a half years, Hayes payed off the full $60,000 of student debt by tackling it one section at a time.

"Don't focus so much on the big number, but on paying down that next $100 or $500 or even $1,000," Hayes said. "The relief was just unbelievable, and I think my family was there with me, too, and they could just see it and feel it. They’ve really been with me every step of the way."

"I never experienced any sort of debt like this before, just getting my first ever paychecks of my life and trying to handle my finances. It was a huge shock to me," Hayes said.

She decided to get a part-time job and find a roommate to help lower rent.

Her hard work paid off, so now she is paying it forward and sharing tips on her Imperfect Finance social media page.

RELATED: Has the college you want to apply to waived the SAT and ACT? Here's a list

RELATED: Ways to prepare for college during COVID-19 pandemic

"When I first started my first job, I realized I was making a lot of mistakes with my money. I would have overdraft fees or was spending too much on my credit card, and I wouldn't pay off my credit card every month. And I just felt like I was making a lot of mistakes. That’s when I realize: You don't have to be perfect with money to really get a handle on your finances," Hayes said.

Hayes created her own "Imperfect Finance" Student Loan Guide that walks you through what to do when you are starting out on your debt-free journey.

"It’s a 23-page, nine-part guide that walks you through everything that I did to pay off $60,000 in debt. I really recommend it for anybody, especially beginners," Hayes said.

When starting out, Hayes said it is important to avoid emotional spending.

"Especially now, with coronavirus going on and everything that’s going on in the world, we are all at home and Amazon is just a click away. Try to do your best to stay mentally healthy, whether that’s getting out in the sunshine, or going for a walk. That was something I definitely had to overcome and really just stay focused on my goals," Hayes said.

Another piece of advice for current graduates is to reach out to your college career center. People there will have updates on which companies are hiring even during the pandemic.

"A lot of companies are still hiring, so if you are a recent college graduate, maybe you don’t have a job just yet, but don’t give up. There are plenty of jobs out there," Hayes said.

Now that her student loans have been payed off, Hayes said she is now focused on saving for retirement.

"I promise you: It is possible to pay it all off, just get started. Start reaching out to other people who have done it, start looking up podcast and blog posts. There are so many people that would love to hear your story and get you on the right path of paying off your debt," Hayes said.