People can provide feedback online on the development proposal summary, the site layout, building form and architecture until Nov. 7. 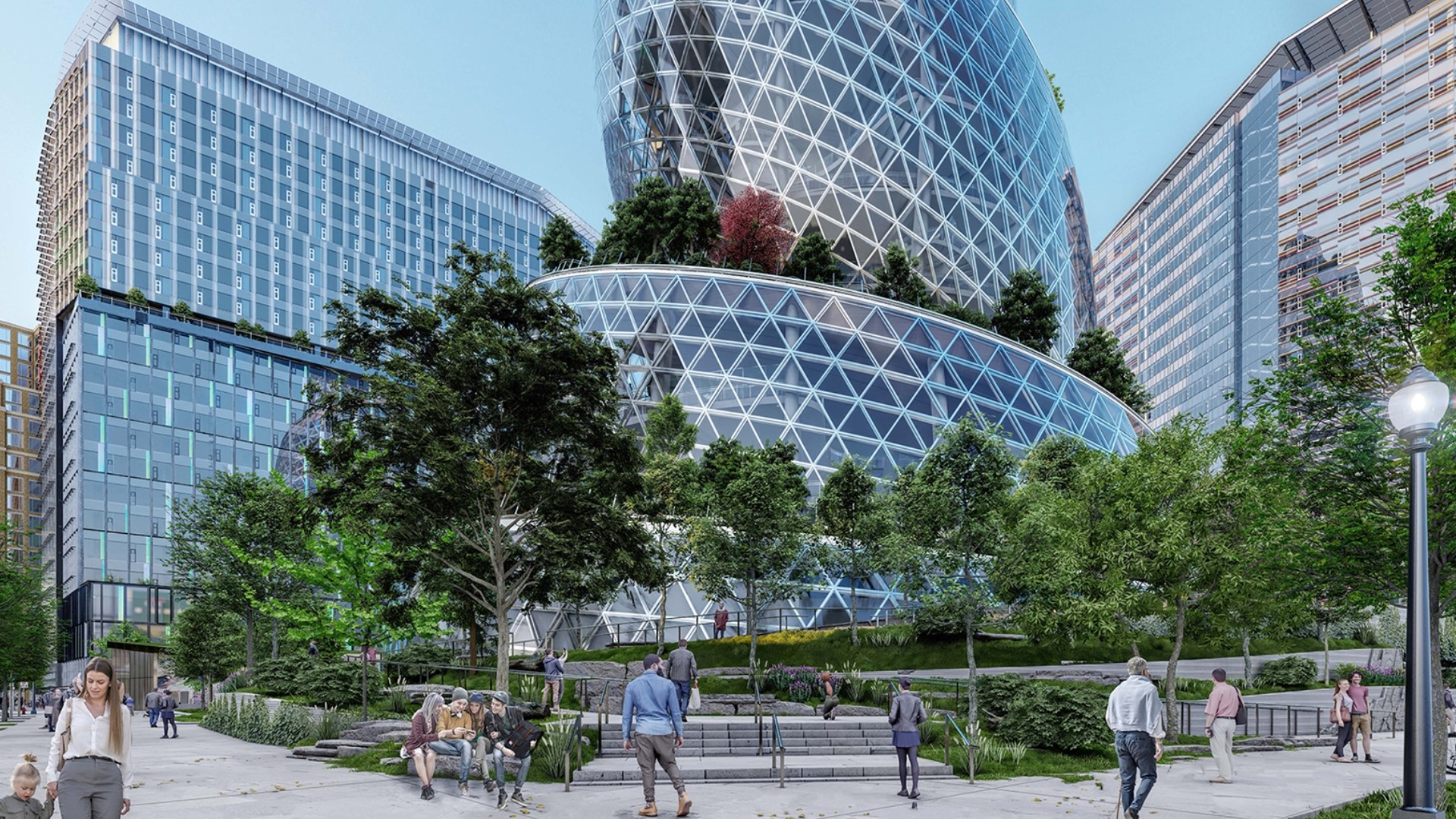 ARLINGTON, Va. — Amazon revealed design changes to its proposed PenPlace site for the third phase of HQ2 after months of county and community feedback.

PenPlace, located in Crystal City near Army Navy Drive and Eads Street, plans to divide approximately 3.3 million square feet across four structures including three 22-story office towers with retail space and "The Helix," a 370,000-square-foot building shaped like a double helix to house an artist in residence program, a meeting center and an outdoor hill climb.

The extensive revisions to the original plans pushed approval by the county to  2022, more than a year after the giant tech company released the designs.

"Over the past eight months, we’ve been working with Arlington County staff and actively listening to feedback from the local community to continue improving our initial project," Amazon said on its website Thursday. "We appreciate the ideas and have made changes to enhance the overall connectivity of the site. We also incorporated additional sustainable elements and more greenery into the design, and diversified the architecture within PenPlace."

In a Long Range Planning Committee (LRPC) meeting in July, the community expressed wanting easier access for pedestrians and cyclists to move through the PenPlace site. Developers changed the proposals to widen sidewalks and add a mid-block stair toward the north section of the site to add on to the walkway around The Helix. Amazon also added protected bike lanes to connect to the local bike transit plan including "protection islands" at all intersections.

A presentation from NBBJ Design Principal Dale Alberda on Wednesday showed how developers moved some of the office towers to accommodate more space for pedestrians and cyclists. Other changes include:

To meet the public desire to have more green space and plants throughout PenPlace, Amazon expanded the green area by 5,500 square feet and reduced the amount of paving. The new plan increased the public open space to 2.5 acres.

Amazon also announced its mission to reduce the amount of embodied carbon and water consumption to increase energy savings.

The company heard from neighbors who wanted the appearance of the three office towers to change.

"They wanted to see each building look different than the others to add creativity and uniqueness to the architectural design beyond The Helix," Amazon said. "Based on that input, we’ve made various adjustments to make each building distinctive and special. We’ve broken up the building facades, making each base, middle, and top stand out more. We’ve also given each building more distinct character by making the exterior of the three structures a different color and texture, inspired by the local landscape."

PenPlace will also double the number of rooftop solar panels and make them part of the buildings on the skyline.

The retail pavilions will have roof meadows, and all building terraces will include landscaping to continue enhancing the connection to nature throughout the project.

Arlington County has started an online engagement opportunity to ask for more feedback from the community as part of the next step of the proposed HQ2 site.

People can review the latest slides and video presentations and fill out an online form.

The form will provide an opportunity for comments on aspects of the project such as the development proposal summary, the site layout, building form and architecture, open space, transportation, community benefits, and sustainability.

A county spokesperson said planning staff will then compile the public comments received into a preliminary report for the Site Plan Review Committee of the Planning Commission.

A virtual SPRC meeting will be held on Dec. 6, and a second virtual meeting will be scheduled during the first part of 2022, followed by public hearings on the project by the Planning Commission and County Board.

The Planning Commission and County Board hearings are currently anticipated to occur in March 2022.