MPD arrested the operator of a van for reckless driving during a Saturday protest. The van's driver said he was only trying to hand out free snacks to protesters. 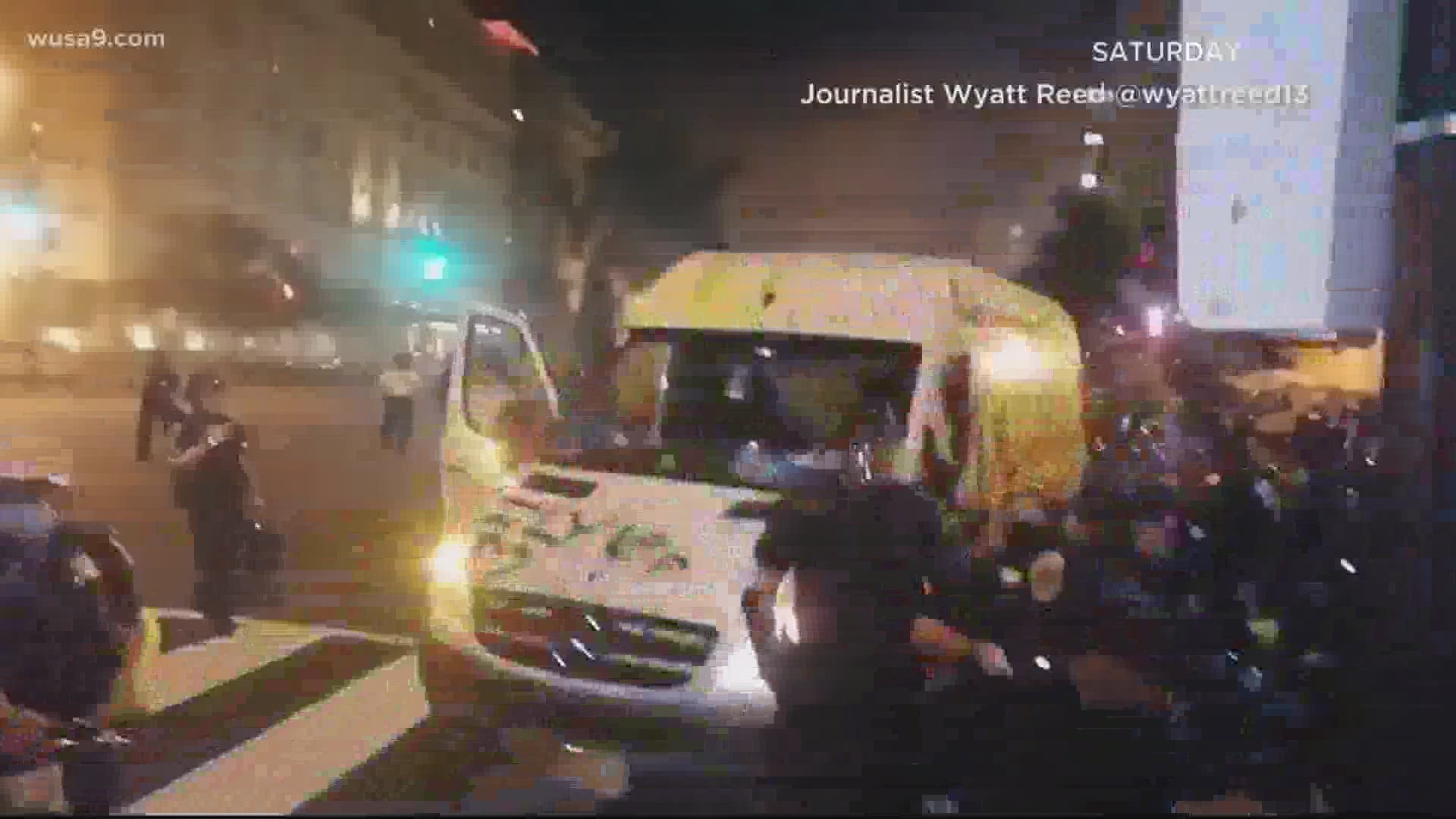 WASHINGTON — D.C. leaders are blaming violence at weekend protests on “outside agitators," but two non-local protesters arrested by police said they did nothing wrong.

Over two days, MPD data shows the agency arrested 19 people on charges that varied from assault on an officer to rioting.

Newsham said more than 70% of the people arrested do not call D.C. home.

“They appear to be folks that are coming into our city, our peaceful city, with the intent of destroying property and hurting folks,” he said.

“What we’re certainly not going to do is standby and allow outside agitators to come to our city to distract us from the work of D.C. residents,” she said.

Bowser also said District leaders were not sure if people coming to the District rom elsewhere were connected to any one group or funding source.

“We don’t know who they are, who funds them, who organizes them, but we know they came together to create havoc,” she said.

MPD released a breakdown of where the weekend’s arrestees are from Monday night. The breakdown is as follows: five from D.C., five from Maryland, three from Virginia, one from Louisiana, one from South Carolina and four whose whereabouts are unknown.

MPD released data tonight showing where the people it arrested over the weekend at protests have come from. Of the 19... 5 are from DC, 5 are from Maryland, 3 are from Virginia, 1 is from Louisiana, 1 is from South Carolina, & another 4 have whereabouts unknown. (@wusa9) pic.twitter.com/QxRLE72FIL

MPD data shows 541 people have been arrested in unrest-related incidents dating back to May 30. Forty-three percent of the people arrested have been from D.C., while MPD said 39% have been from Maryland or Virginia.

It is unclear how many of the people MPD said it arrested from Maryland and Virginia are from the immediate Washington metropolitan area.

During Monday’s press conference, Newsham drew attention to a van that police stopped near the corner of 16th and I Streets NW early Saturday during a protest. Newsham said the van was connected to protests elsewhere around the country.

Both Amanda Siebe and Jeremy Vajko said they were in the van at the time police stopped it. MPD said Vajko was arrested for reckless driving.

But, both Vajko and Siebe said MPD claims are false. While they said they had previously driven the van to protests in Portland and Kenosha, they added they had not participated in any actions that were meant to agitate.

He said he and Siebe were only at the protest to hand out food, water, and medical equipment to protesters to free. Vajko said the van was not traveling recklessly as claimed by MPD.

“I was being incredibly slow and safe for everyone involved,” Vajko said.

Vajko and Siebe also said MPD broke the windows to their van in order to remove them from the vehicle.

RELATED: ‘We refuse to stop until we get that justice’ | 23-year-old activist prepares for March on Washington

In a video of the alleged incident, provided to WUSA9, viewers can hear someone yell “stop that van” just before glass shatters in the background. The video is not focused on the van the second the glass is shattered. However, the shattering glass can be heard, the video refocuses on the van where viewers can see an MPD officer opening a door to the van.

“There was no justification for the way they treated us,” Siebe said.

MPD released the following statement in response to the incident:

"The suspect was driving the van recklessly in an area restricted to vehicles, placing hundreds of individuals at harm. MPD stopped the vehicle in order to place the suspect under arrest."

Vajko was released from MPD custody Monday. He said he had been informed by authorities that the DC Attorney General had declined to pursue charges against him.