Mayor Bowser: Violence won't be tolerated after weekend of intense protests in DC

The clash with police happened late Saturday night into Sunday, just one day after the March on Washington. 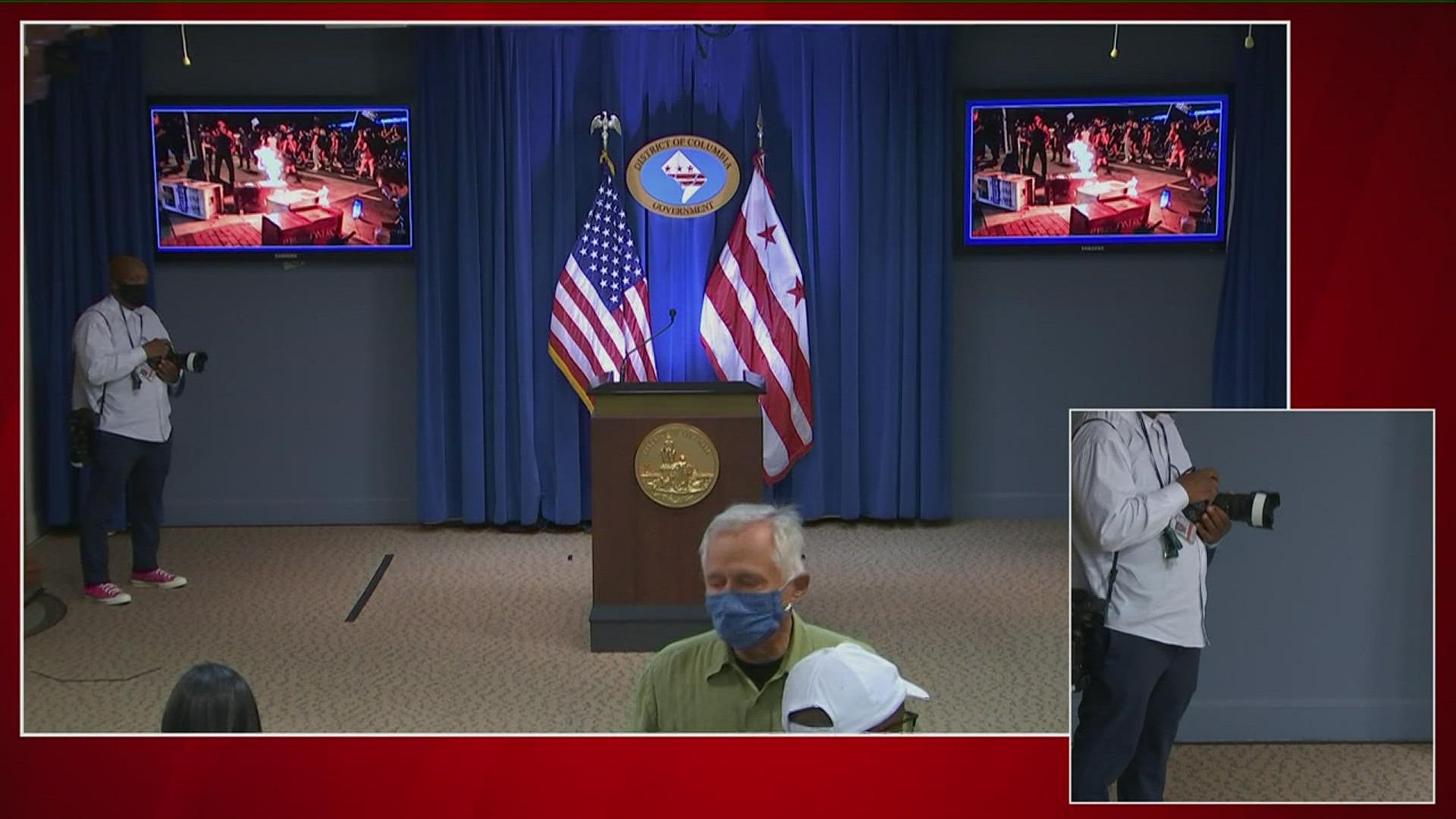 WASHINGTON — Protesters and police clashed Sunday night into Monday in the streets of downtown D.C. for the second straight night.

Protesters chanted and set off fireworks, something that was similar to the previous evening, which led to arrests early Sunday morning.

A clash between D.C. police and protesters unfolded late Saturday night into Sunday near Black Lives Matter Plaza ending with five protesters being arrested and charged.

Police said five individuals were arrested after 'a group of individuals, who were intent on damaging property and injuring Metropolitan Police Department (MPD) officers, began engaging in riotous behavior at Black Lives Matter Plaza and throughout the city'.

One video shows a group of demonstrators being treated at the scene while a chemical irritant was sprayed in the air. 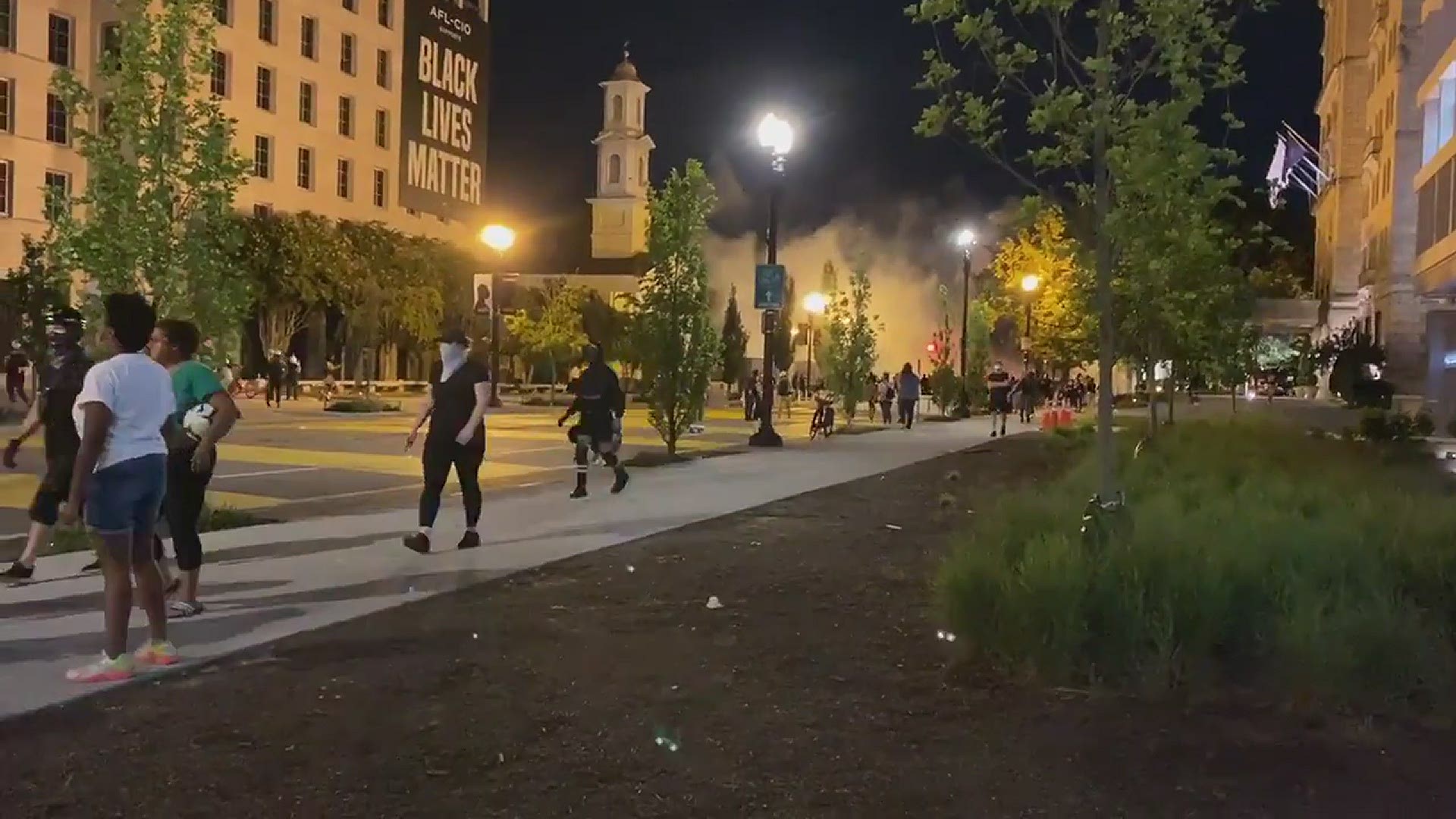 Videos on social media depict a chaotic scene with dozens of officers lined up, ready to clear demonstrators out of the area. Some posted that they were being shot at with rubber bullets by the officers, with others gathered around burning trashcans and boxes on side streets.

Looks like some type of spray was deployed. We moved back to the end of the block. @wusa9 pic.twitter.com/IN5V2jiMcj

Sunday, protesters shouted at WUSA9 field crews that police instigated them during peaceful gatherings. But the narrative from DC Police this weekend has been that officers in danger and destruction to the city have led to action by its department.

On Sunday morning, President Donald Trump tweeted that Mayor Bowser "should arrest these agitators and thugs," adding that if she didn't "clean up D.C. then the Federal Government will do it for you."

D.C. Mayor Muriel Bowser and MPD Chief Pete Newsham spoke Monday afternoon addressing the situation Sunday evening at Black Lives Matter Plaza. During Monday's press conference, Bowser and Newsham said that the city will not tolerate violence of any kind on the streets of D.C., making a distinction between residents who have participated in racial justice protests peacefully since the killing of George Floyd and "outsiders" who have destroyed property and targeted officers.

"There are people who are there to protest racial injustice and demand the government respond. Unfortunately, when there are people among them creating chaos and violence against police it's hard to distinguish them all." Bowser said on police use of force this weekend.

Newsham said there were zero arrests in relation to Friday's March on Washington, the largest event the city has seen this year. However, he said the violent events of the weekend could be a case of domestic terrorism, as current intelligence suggests the "outside agitators" were coordinated and funded by a larger group.

No information was immediately released by D.C. police or Mayor Bowser's office on any injuries from Sunday evening.

Protests have been seen nationwide for weeks, but the clashes in DC come as other major cities like Portland, Oregon, have seen deadly violence.

These current protests were sparked after the shooting of Jacob Blake by police in Kenosha, Wisconsin, and came one day following The Commitment March on Washington.

DC Police issued a full statement Sunday afternoon of what happened near BLM Plaza the night before:

Throughout the evening on Saturday, August 29 and into the morning of Sunday, August 30, a group of individuals, who were intent on damaging property and injuring Metropolitan Police Department (MPD) officers, began engaging in riotous behavior at Black Lives Matter Plaza and throughout the city.

These individuals ignited fireworks, intentionally set fires, as well as threw projectiles--including glass, bricks and smoke grenades, at officers in the area. Additionally, lasers were used to visually impair officers.

In an attempt to stop these individuals, MPD deployed sting balls and tear gas.

As a result of the riotous behavior, five individuals were arrested and charged with Assault on a Police Officer, Felony Rioting, Reckless Driving and Possession of Unregistered Ammunition.

Mayor Bower and MPD will always protect the rights of those engaged in non-violent First Amendment assemblies, however, those who engage in criminal behavior and seek to cause harm to others will be held accountable."

Officers with shields are out here now pic.twitter.com/Nm85fmKiaB

Anti-police-terror protest under Dupont Circle is so loud you can feel the ground shake. Pure energy tonight pic.twitter.com/wHIwedELJC