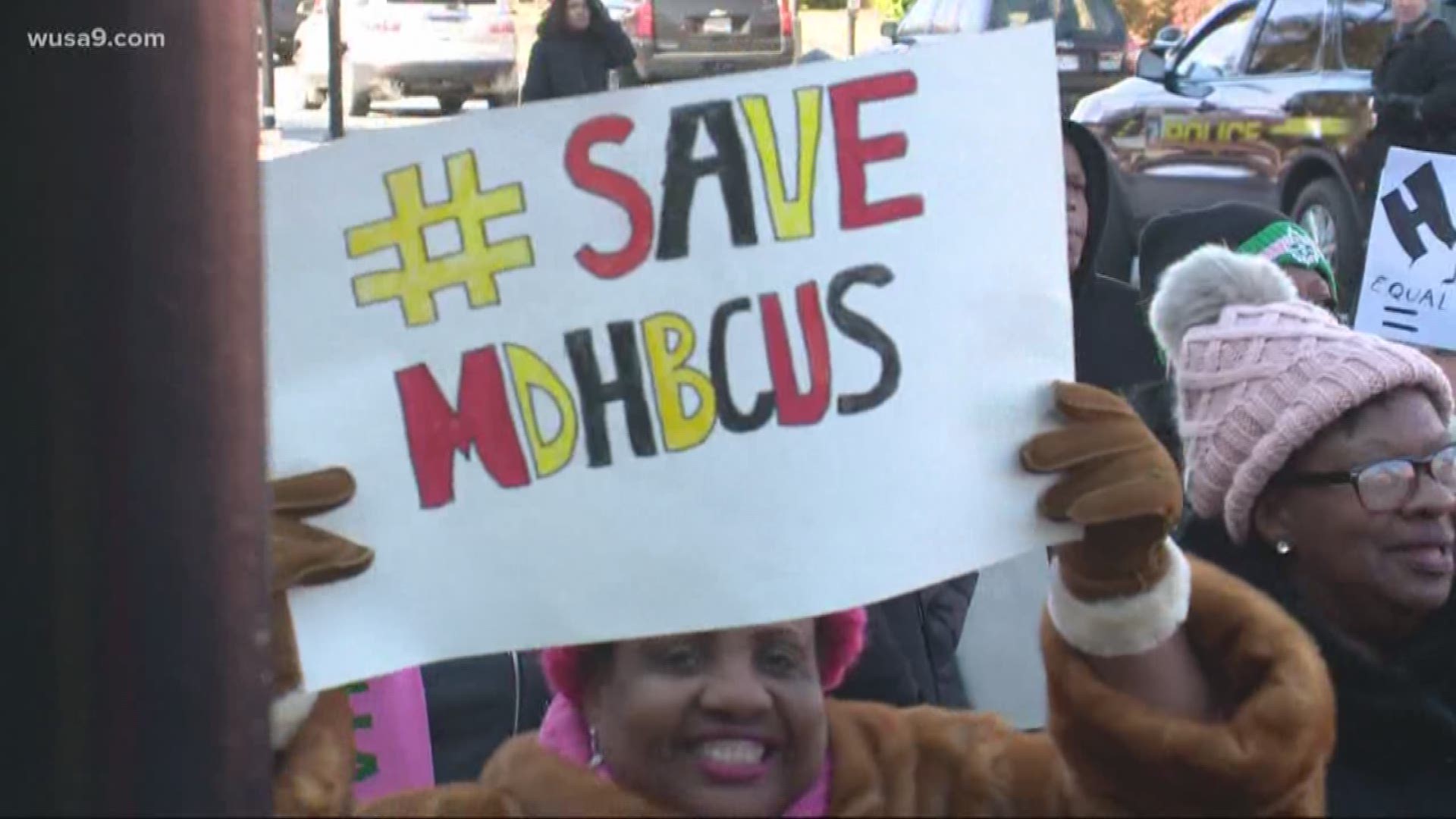 ANNAPOLIS, Md. — There are four historically black colleges and universities, or "HBCUs" in Maryland: Bowie State, Coppin State, Morgan State and University of Maryland Eastern Shore. Current and former students from all four said the state has been short-changing them for years compared to "traditionally white institutions."

"I always say Bowie State chose me at the end of the day," Marquise Wade, a senior at Bowie State, said. "My institution provided so many opportunities for me and leadership opportunities."

A 2006 lawsuit filed by the NAACP accused Maryland of giving more money and unique academic programs to "traditionally white institutions." A federal judge ordered the state to settle the lawsuit in 2017. Governor Hogan offered $200 million, much less than what the legislative black caucus said is needed.

"I think today sends a strong message, not only to the Governor, but to the nation, that $200 million is unacceptable," Del. Darryl Barnes (D) Prince George's County said. "There have been a duplication of services, that our HBCUs have been falling short."

Governor Hogan wrote a letter to House Speaker Adrienne Jones, which said in part: "We have worked together across the aisle to fund HBCUs at historically high levels. With these joint efforts, most HBCU’s are now better funded than the state’s traditional institutions, and will continue to be."

The letter added, "With regards to the lawsuit, the administration's offer of $200 million to resolve this matter is 100% higher than our previous offer, which at the time the plaintiff's lawyer called "a step toward a meaningful remedy." Moreover, this offer is 500% higher than the final offer of the previous administration, even after it had eight years to settle this matter."

Democratic Speaker of the House Adrienne Jones responded to Gov. Hogan's letter writing, in part, "But, as the federal court found, the program duplication issues remain and are of real concern to me and many other lawmakers. The proposed $577 million settlement figure would be used to develop mew programming, hire faculty and expand the reach of State scholarships at our historically black institutions. I have been particularly concerned about strengthening our undergraduate access and programming to ensure that students can graduate with a degree but without significant debt loads."

Hogan cited a potential budget shortfall as one reason why HBCU funding can’t go up as high as asked. But for college students both new and those about to graduate, this is a fight for the future.

"The funding would definitely provide more resources to the school, so new housing development, different new buildings, upgrades we think we deserve," Wade said. "I plan to pursue a masters in homeland security."

There’s a moving target when it comes to funding. Governor Hogan is offering $200 million. Speaker Jones, said she won’t settle for less than $500 million. HBCU advocates are calling for $1 billion to restore equality. That battle promises to be fought in the statehouse in the coming months and years.