The Montgomery County Council released the video of the incident. 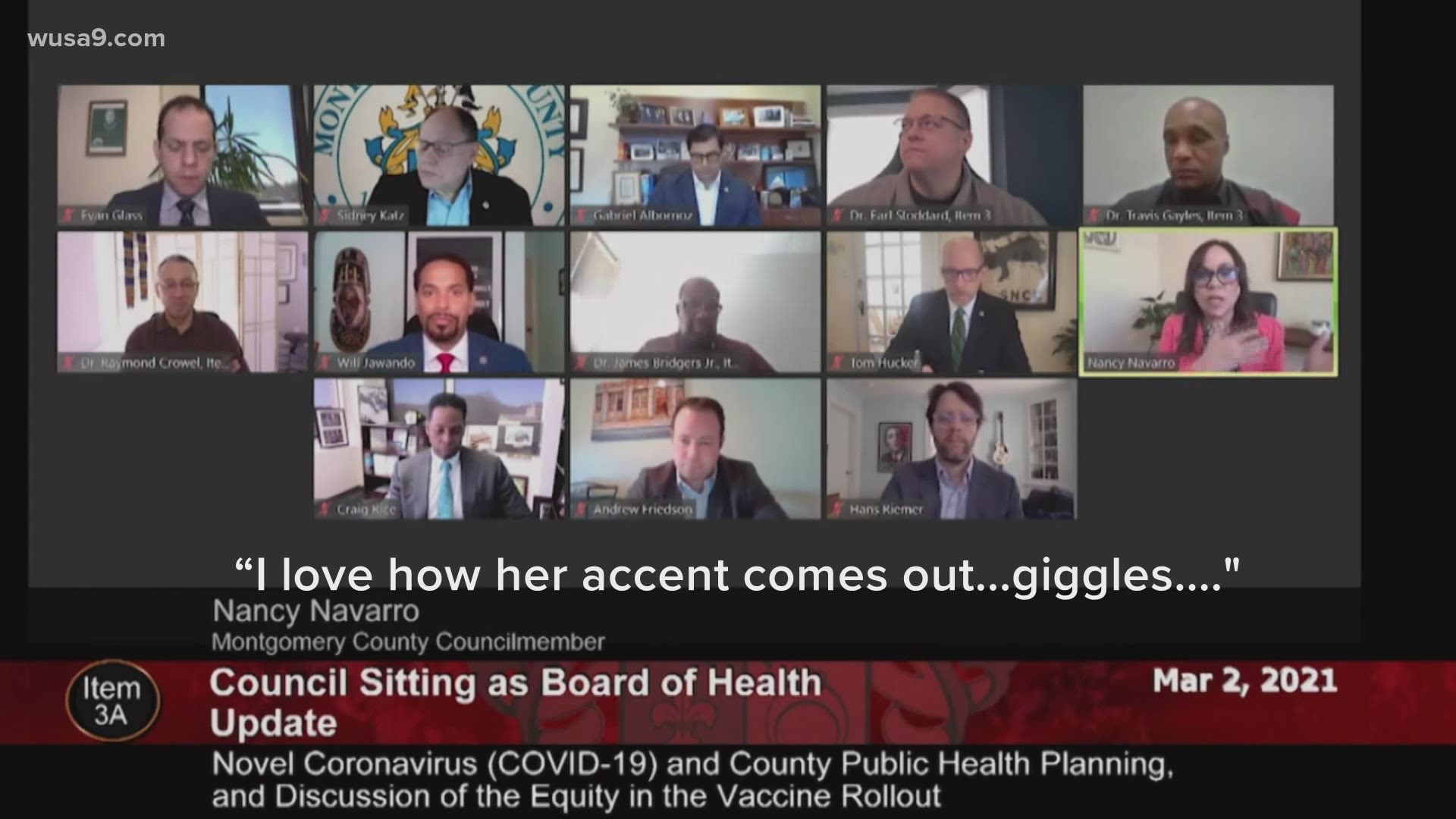 ROCKVILLE, Md. — During a virtual Montgomery County Council meeting on Tuesday afternoon to discuss the county's COVID-19 vaccine equity rollout initiatives, comments were made about Councilwoman Nancy Navarro's accent and pronunciation of words while she was talking about equality in vaccine distribution.

The comments were made in the background during the virtual meeting, according to Montgomery County officials. In the video released by the Montgomery County Council, you could hear someone having a brief conversation about Councilwoman Navarro's accent and the way she pronounced the word "hologram."

Moments later in the video, you could hear someone contact the person who made the comments and notifying them that their mic was on and was heard in the meeting.

"It's so disheartening to know this continues to be an issue," Navarros said.

The councilwoman said it's an example of everyday microaggressions that people of different races, national origins and ethnicities have to deal with.

"It just adds to the sense of additional burden that you carry around, and this exhaustion of having to explain to people why these things have an impact," she said.

Navarro said she has not heard an apology from the two workers, but said it's much bigger than them.

"While the facts involved with this matter are being investigated, we will recommit ourselves to educating our workforce and fostering a culture that is absolutely respectful, free of bigotry and reflective of Montgomery County's values," the county said in a statement Wednesday.

County Executive Marc Elrich said the incident is, "deeply concerning," and that he supports an investigation to determine the next step.

"Mocking people for any reason is unacceptable," Elrich said.

This report is deeply concerning, and I fully support efforts to investigate this matter and determine next steps. Mocking people for any reason is unacceptable. The diversity of this County is an essential ingredient to our strength and our success. https://t.co/pu3EneZmcE

The county said they will ensure that something like this incident doesn't happen again and will work to address inequity and racial bias.

Montgomery County officials released a statement addressing the comments that were made, but they did not specify the vulgar remarks:

"The Montgomery County Council stands in solidarity with Councilmember Nancy Navarro after a troubling and unacceptable incident occurred during Tuesday's televised Council session, in which concerning background audio was heard on the broadcast. The entire Council is committed to racial equity and safe workplaces. Furthermore, our community expects that our Council and its employees and contractors are held to the highest standard.

County Council President Tom Hucker and Vice President Gabe Albornoz met with Council central staff leadership immediately following the incident and have directed the County's Office of Human Resources to conduct a full independent investigation of this incident. They are grateful to Councilmember Navarro for her willingness to come forward to shine a light on this disturbing incident. While the facts involved with this matter are being investigated, we will recommit ourselves to educating our workforce and fostering a culture that is absolutely respectful, free of bigotry and reflective of Montgomery County's values.

The Montgomery County Council reaffirms its pledge, which is found in our in our laws and policies, to foster equal opportunity for all without regard to race, color, religious creed, ancestry, national origin, sex, marital status, age, gender, disability, presence of children, family responsibilities, source of income, sexual orientation, gender identity, or genetic status as strictly in accordance with their individual merits as human beings.

We will all continue our work to address inequity and racial bias, and to create a future society where incidents like these do not ever happen."

Here's a look at the video below: