The confederate memorial, a grave marker, was vandalized last week with black spray paint. This week, it was toppled to the ground. 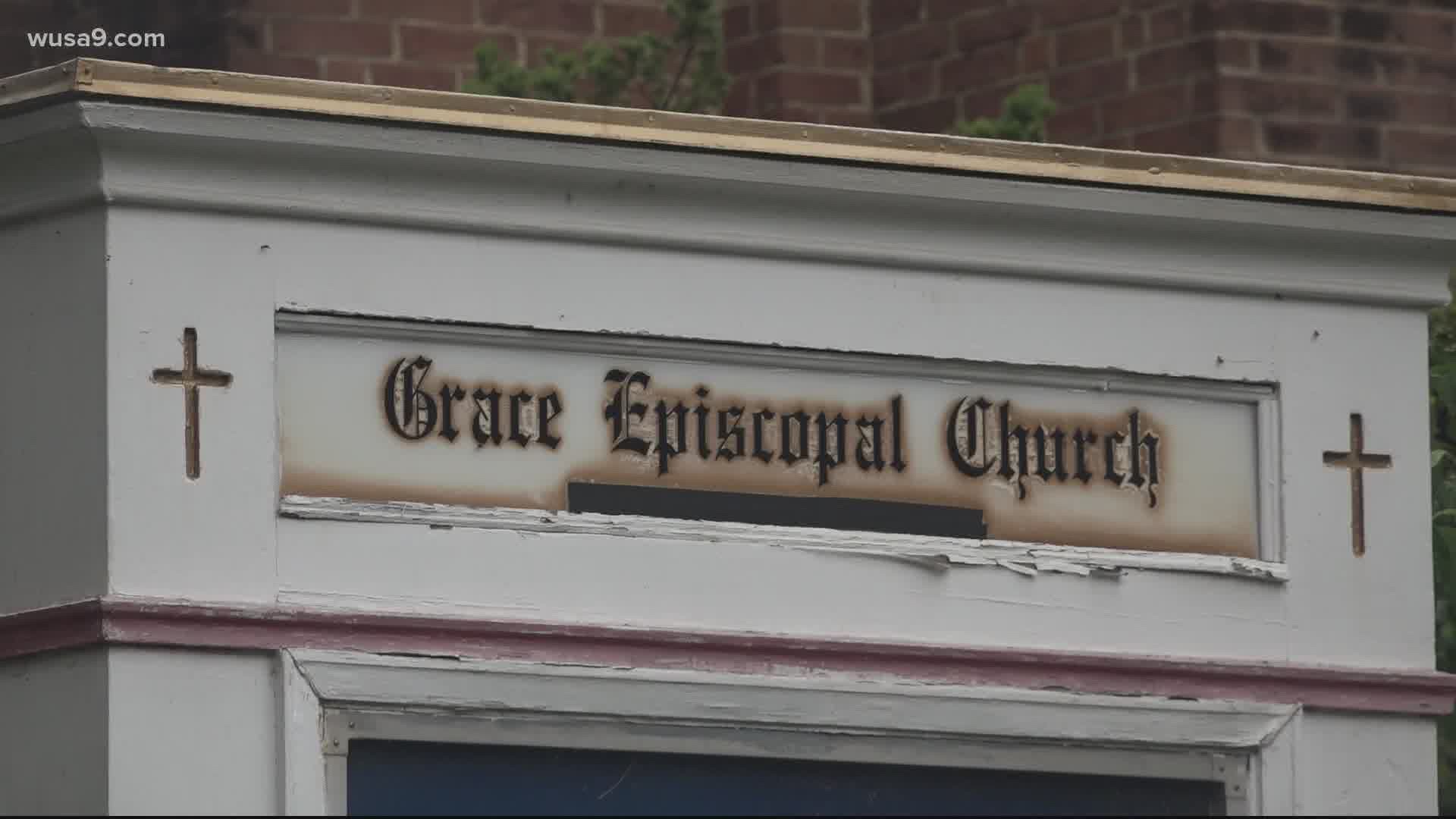 SILVER SPRING, Md. — A confederate memorial was toppled in a Silver Spring church cemetery Wednesday night after being vandalized earlier this week.

The memorial served as a grave marker for 17 Confederate soldiers who died in the Battle of Fort Stevens. The marker, located at Grace Episcopal Church cemetery in Silver Spring, was vandalized late last Sunday evening with black spray paint.

Interim pastor of Grace Episcopal, Richard Kukowski, said the church did not file a police report because they intended to handle the issue "in house." Kukowski said that he was not aware the monument had toppled until late Thursday morning but was aware of last week's vandalism incident.

Grace Episcopal Church was founded in 1855, with the marker established in 1896. Kukowski said the controversy over the marker isn't new and that there have been efforts to remove it, but multiple historical societies are involved with the preservation and need to contact descendants. Only one of the 17 soldiers buried there has been identified.

Leaders from Grace Episcopal Church said those responsible were “unfamiliar with the church community” and how they moved beyond their own dark past.

According to the church website, Maryland was a border state at the time and one of four slave states that did not secede from the Union. The church, home to both Confederate and Union supporters, buried the 17 Confederate soldiers on its grounds and erected the monument in 1896. The church evolved and 100 years later welcomed an openly gay African-American woman to serve as its pastor.

The Silver Spring Historical Society posted the vandalism on its Facebook page and hundreds of people shared the images and weighed in on the issue. The church released its own statement saying, in part: “For years, Grace has wrestled with this marker, knowing that we must dedicate ourselves to learn from our past, and to truly seek reconciliation through Christ.”

Other monuments and statues recognizing the Confederacy have been knocked down across the country, with several torn down in Virginia. The statues of Confederate leaders Williams Carter Wickham and Jefferson Davis have been among those toppled in the last two weeks in the commonwealth.

This Sunday, Grace Episcopal Church is planning a Black Lives Matter march on  5:30 p.m. starting at the graveyard. All are welcome to attend.

Here is the Church's full statement:

Silver Spring, MD – June 16, 2020 – The Grace Episcopal Church community condemns racism in any form and supports the Black Lives Matter movement that is sweeping the world. Grace has one of the most diverse congregations in the Diocese of Washington. The Grace community is young and old, black and white, native-born Americans and immigrants, gay and straight, married and single. As a community, we want to deepen our connection with God in a community that is accessible to and respectful of all people regardless of race, age, or gender.

“We follow Christ’s example in challenging racism: building a community of faith that demands racial justice,” said Rev. Richard Kukowski, interim rector of Grace Episcopal Church. “As a community of faith, our values prompt us to raise awareness of and interrupt all forms of racism.”

During the recent events and death of many black people at the hands of police, Grace is committed to taking action on racial justice within and beyond the Grace Church community. In 2016, Grace created its racial justice ministry, “Wade in the Water.”

On May 31, the Wade in the Water ministry gathered the Grace community for a peaceful protest against systemic racism. Between 350-400 people gathered for the socially-distanced protest along Georgia Avenue. Our friends from Silver Spring United Methodist Church joined us in our peaceful protest.  Another protest is scheduled for June 21 at 5:30 pm.

During the night of June 14, a cemetery marker on the Grace Church grounds was defaced and on the night of June 17 was toppled by unknown assailants who are unfamiliar with the church community. The church’s current values and beliefs differ greatly from the beliefs of people in the 1800s. At that time, the church, as divided as the nation itself, included Union supporters and Confederate sympathizers.

Today, Grace joins countless others who raise concerns about Confederate statues. Although we strongly reject slavery for which Confederate soldiers fought, we acknowledge that these soldiers are buried in consecrated ground, just as their former opponents received at Battleground National Cemetery.