'This is why people need to beat their kids' | Video shows police officers handcuffing, screaming at 5-year-old boy 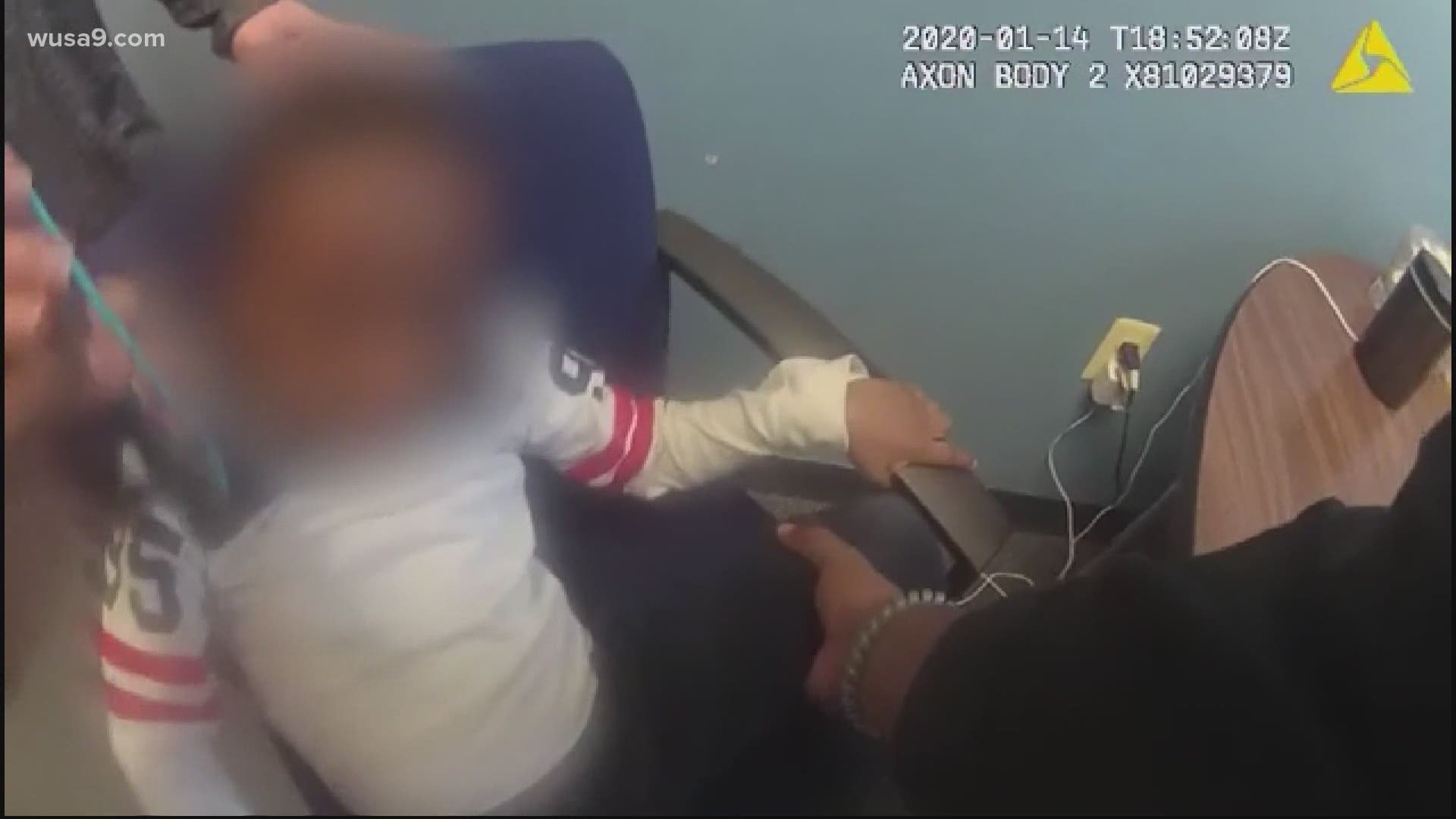 MONTGOMERY COUNTY, Md. — Montgomery County Police have released body-camera footage, from January 2020, of an incident between officers and a 5-year-old boy who allegedly wandered away from his school and did not want to return.

Throughout the 51-minute video, officers can be seen screaming in the child's face, advocating for people "beating their children", and briefly handcuffing the boy.

According to a Montgomery County Police Department press release, two officers were called to East Silver Spring Elementary School by an employee of the school for help in retrieving the child who had run away. The video shows the officers driving through a residential neighborhood and finding the child leaning against a car.

"Come here buddy," the male officer says, to start the conversation. "What's going on man? What are you doing?"

When the child does not respond, the officer appears to kneel down to his level and begins to ask the child why he thinks he can "make his own decisions" when he is not an adult.

"I don't care if you don't want to go to school, you don't have that choice," the officer continues. "Do you understand?"

WARNING: This video may be tough to watch for some viewers.

At that point, the officer takes the boy's arm and starts leading him to a police cruiser, and the boy starts to cry. A female school employee is also seen in the video holding the boy's hand, telling him she's riding with him back to school. The crying child is buckled into the backseat of the police car.

"Does your mama spank you?" the female officer asks the boy. "She's going to spank you today. I'm going to ask her if I can do it."

The officers drive the boy back to school with the school employee in the car as well.

"This is why people need to beat their kids," the female officer is heard saying as they wait to take the child into the school.

Inside the school, the boy is placed in a chair in an administrator's office, and the female officer at one point stands over him and screams in his face as he continues to cry.

The boy is told he's "mad rude" and called "a violent little thing." There are multiple conversations between the officers and administrators about how the child should be disciplined at home. Eventually, the male officer calls his mom and can be seen holding him in the chair with one hand, as he asks her to come to the school.

Later, when the boy's mother has arrived, the male officer tells the boy that later in life, when he wants to make his own decisions, handcuffs will be his best friend, and he puts the handcuff on the child.

"These are for people who don't want to listen and don't know how to act," the male officer said, putting the child's hands behind his back and demonstrating how a cop would handcuff him. "Is that how you want to live your life?"

RELATED: ‘There was no excuse for that’ | Community calls for justice following alleged police treatment of a 5-year-old

The boy's family filed a lawsuit against the two Montgomery County Police officers, the county itself, and the Montgomery County Board of Education claiming the boy was assaulted and suffered mental anguish during the incident.

The boy and his mother are being represented by Attorneys James Papirmeister and Matthew Bennett.

They said they counted at least 15 to 20 times that police officers told the boy that he needed to be beaten.

Bennett said the boy’s mother wants justice in the case.

“I felt surprised and shocked by some of the things [in the video],” he said. “Because we're not talking about a criminal. At five-years-old, you're not even competent under the law to be a criminal.”

Papirmeister said the incident shows a profound need for countywide training of police officers in Montgomery County police need to be trained on how to deal with little kids.

Papirmeister said the boy is currently receiving trauma therapy for the situation he experienced last year. Both he and Bennett said they are now seeking monetary compensation on the behalf of the boy’s family.

“The allegation, fundamentally, is a civil rights violation,” Bennett said. “You have the right to be free from unlawful seizure, unlawful search, unlawful overstepping by the police. And, so when that happens, for instance, if you grab someone and detain them against their will, that's considered a false arrest. It's also considered a constitutional violation.”

In a statement, the Montgomery County Police Department said a thorough investigation was conducted of the entire event. The department added that the same investigation has since concluded.

“The findings of this internal investigation, as in all internal matters, are confidential under Maryland law,” the statement reads. “Both officers remain employed by the Montgomery County Department of Police.”

Councilmember Will Jawando said he's been pushing for the release of the body-camera video for three months.

“You just see his body language is trembling because his face is blurred out obviously in the video, but the yelling in his face while administrators stood by ... putting a handcuff on him, telling him he's gonna be in jail, just everything was wrong,” Jawando said. “No one was protected, no one was served in the case of the police department. And then the administrators just watched it happen at the school building.”

Jawando called for the officers involved to be fired and investigated.

"Consistent with MCPD policy, an investigation into the officers' conduct was initiated with the MCPD Internal Affairs Division," the statement said. "A thorough investigation was conducted of the entire event. The internal investigation has concluded. The findings of this internal investigation, as in all internal matters, are confidential under Maryland law. Both officers remain employed by the Montgomery County Department of Police."

The councilmember also said the administrators who witnessed the police behavior and didn't intervene should be placed on leave, pending an investigation.

“I also have a lot of concerns about MCPS,” Council President Tom Hucker said. “To see not only the police, but MCPS staff talk to the mother about how you can hit your kid, but avoid a charge of child abuse is incredibly troubling. They make statements that suggest that they condone child abuse. And this is a terrified 5-year-old."

County Executive March Elrich said he spoke with the MCPD chief and asked him to "revisit training around how officers are expected to interact with children."

"I found the video of the incident involving the 5-year-old child difficult to watch, and it does not reflect the training and expectations we have for our police officers," Elrich said in a statement. "Our police officers are not social workers, psychologists, or therapists and should not be giving advice or direction on parenting. Police duties should end as soon as school personnel are present to take over care of a child." 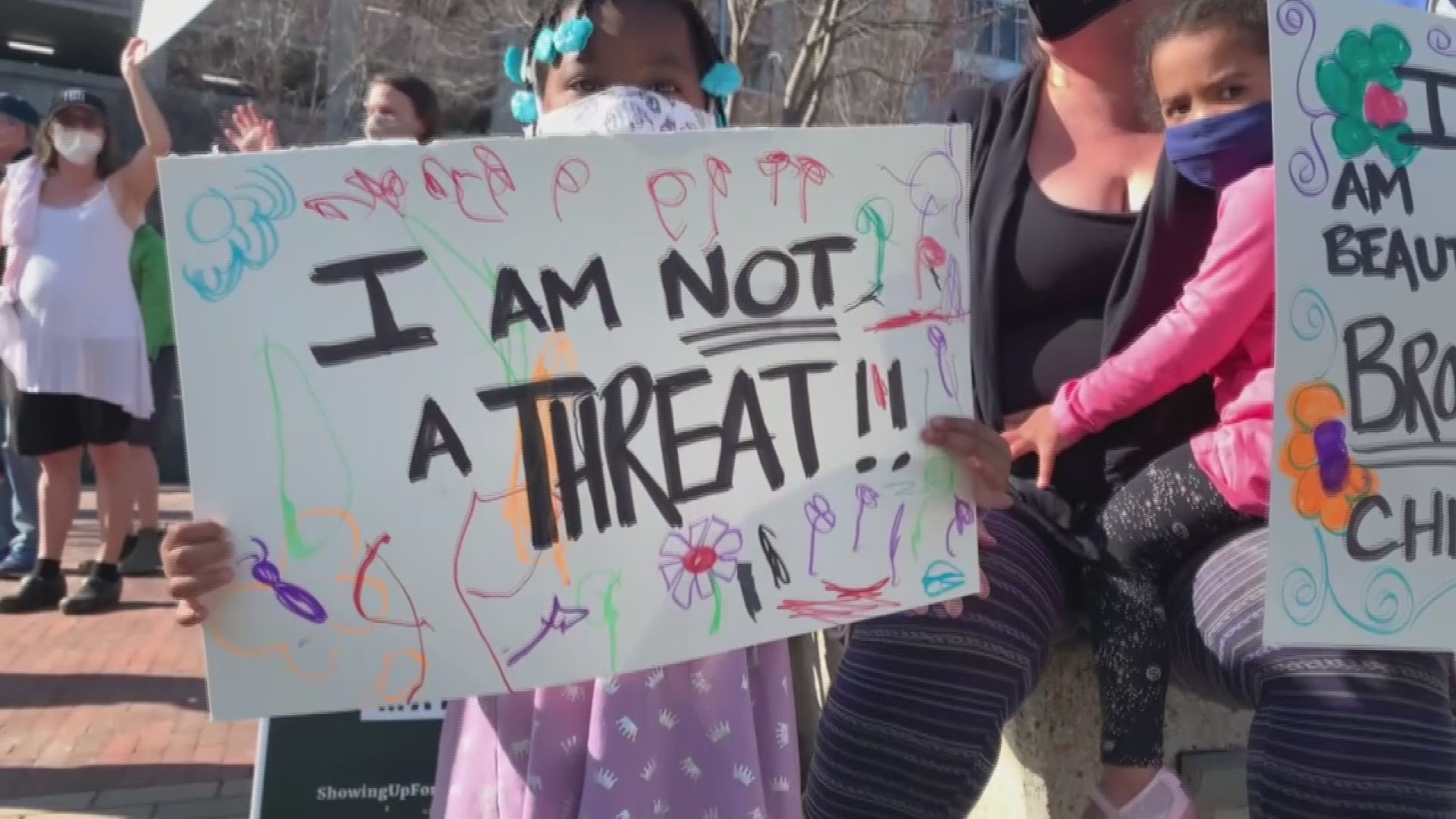 "Our heart aches for this student," Montgomery County Public Schools Board President Brenda Wolff and Superintendent Jack Smith said in a statement. "There is no excuse for adults to ever speak to or threaten a child in this way ... We also expect MCPS staff to follow outlined structures for student intervention and support, as well as school safety ... This incident also underscores the importance of having a team of professionals in all schools to support the diverse needs of our students."

Elrich, MCPS and MCPD all noted that the ongoing lawsuit limited what they could say about the situation, and they all declined to comment on any disciplinary measures taken thus far.

More than 100 people attended a protest outside the school Sunday to bring attention to the incident from last year.

RELATED: The future of policing in Montgomery Co. schools could keep SROs on staff, but not directly inside schools