Police Chief Marcus Jones presented and narrated the edited video at a press conference, promising the release of unedited footage after an investigation was closed. 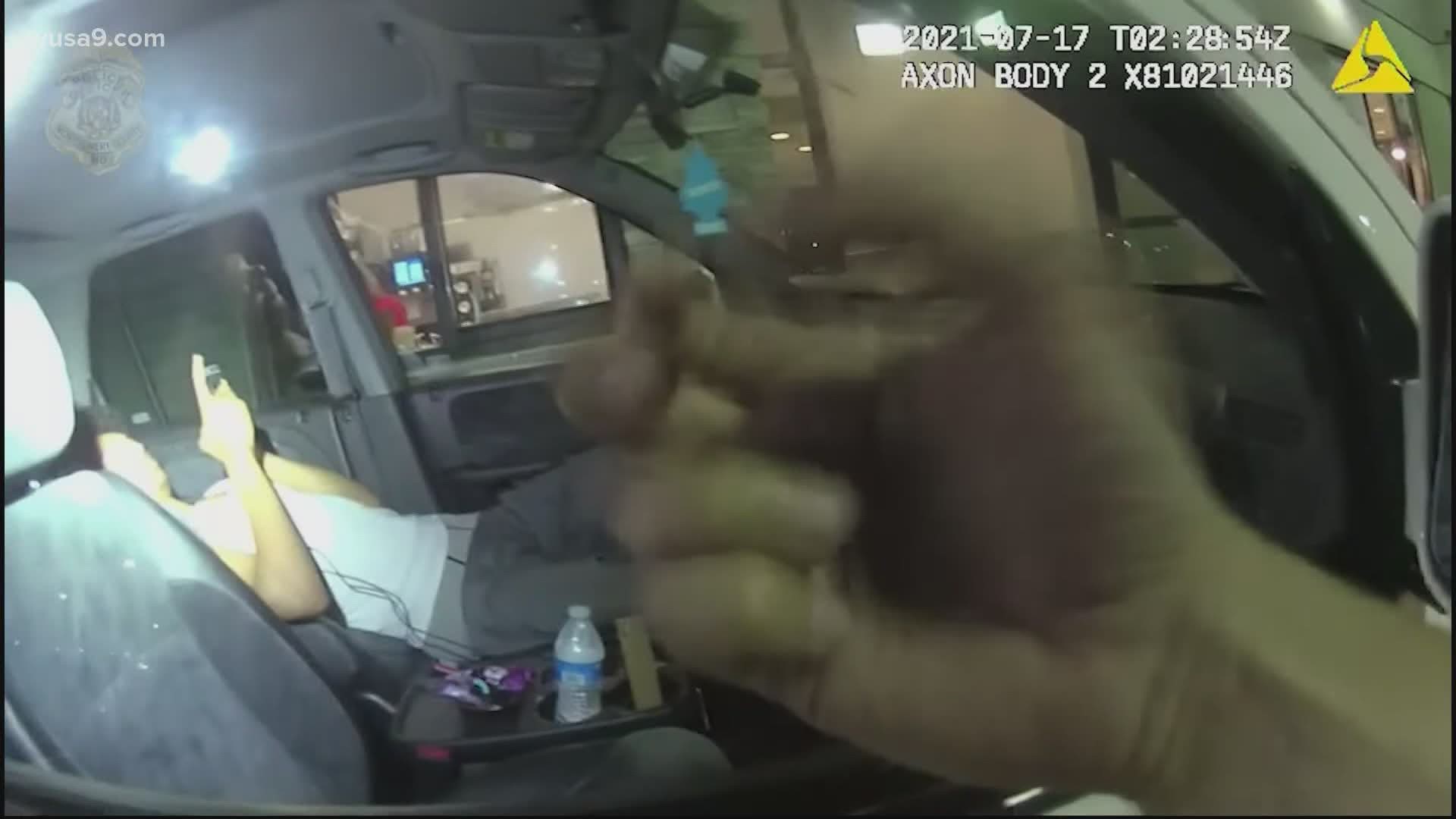 MONTGOMERY COUNTY, Md. — Eleven days after 21-year-old Ryan LeRoux was fatally shot by police outside a Gaithersburg McDonalds, the Montgomery County Police Department released bodycam footage from six different cameras at the scene. Montgomery County Police Chief Marcus Jones presented the edited video at a press conference Tuesday, promising the release of the raw footage after the investigation into the shooting was closed.

The video compilation shows 28 minutes worth of footage between when MCPD officers initially responded to a trespassing call on July 16 at 18273 Flower Hill Way at 9:15 p.m. through 11:02 p.m. when four officers fired at LeRoux's Honda CRV.

Jones said his officers were called to the scene by McDonald's employees claiming Leroux was refusing to pay or move his car after ordering food from the drive-thru lane. The video shows a uniformed officer approached the car and reported seeing LeRoux reclined in the front seat and a gun on the front passenger seat. The officer ordered Leroux to exit the car and radioed for backup.

Tells LeRoux to put his hands up, but he doesn’t. Tries doors, but locked. Calls for backup. @wusa9 pic.twitter.com/kT3wShcEfD

"Put your hands up!" Officer Brooks Inman shouts. "I got a guy. Gun on the front seat. I’ve got him at gunpoint in the drive-thru.”

Several officers arrive as backup and continue asking LeRoux to put his hands up where they can see them. Around 10:53 p.m., the video notes that a crisis negotiator is en route, and Jones said the negotiator was coming from the 5th District in Germantown, with an average response time of 10 minutes.

While the officers wait for the negotiator, a dispatcher calls LeRoux's cell, repeatedly telling him she's "trying to help [him]" and asking him if he can hear what the officers are telling him to do. LeRoux responds that his "hands are already up."

Jones noted that LeRoux's hands were not up or out of the car, as LeRoux was saying they were, though video does not show whether or not he complied. LeRoux eventually ends the call and when a sergeant on scene also tried to contact LeRoux he hung up again.

When backup arrives, we hear an officer over the loud speaker tell LeRoux to put his hands up.

A dispatcher reaches LeRoux’s cell and asks him to put his hands up. He says they are. The chief said officers didn’t see his hands up during that phone call. @wusa9 pic.twitter.com/jU9wSKVdzk

Just before 11 p.m., Jones said his officers made their way into McDonald's to view LeRoux's car from inside the drive-thru window. They reported still seeing the gun on the passenger seat.

At 11:02 p.m. the video shows movement inside LeRoux's car and officers are heard shouting "he's up!"

In a slowed-down version of that portion of video, LeRoux leans forward and appears to be pointing a dark object. Footage from the camera inside the McDonald's shows the back of LeRoux's body, where he leans back with his arm raised.

That's when the four officers shoot at the car, which can be seen from multiple camera angles in MCPD's full video online. WUSA9 has chosen not to show the moment of the shooting from the close-up camera angle.

The video goes on to show a group of officers with shields move towards the car to check on LeRoux.

"His eyes are open!" officers shout as they approach the car. "Gun's still in his lap. He got shot in the head."

Jones said officers found alcohol and water on the passenger seat -- two bottles can be seen in the video -- and video shows officers pulling a gun out of the car.

The chief said officers performed CPR and rushed LeRoux to the hospital, where he later died. Jones did not answer any questions at Tuesday's press conference saying he had "answered them all last week."

To conclude, we see a couple views of LeRoux moving in front seat and then raising some dark object. Can’t tell in body cam video what it is.

Then 4 officers shoot. A group of them moves forward to check on LeRoux and remove gun from car -- they say it was on his lap. @wusa9 pic.twitter.com/31wNViSg2O

LeRoux's family was shown the bodycam footage before it was released to the public. WUSA9 reporter Jess Arnold spoke with LeRoux's father, who said one of his biggest takeaways from the video is that his son was in a really bad place. The father went on to explain his son had just lost his girlfriend and his job, and his grandmother had recently died.

He also said he could not see definitively that a gun was in his son’s hand and that police told him they’ll try to enhance the image. From what he watched, he said it looked like an unnecessary use of force. LeRoux's father called for an unedited version of the footage to be released.

#NEW: Ryan LeRoux's parents say they've seen a lot of negative comments about Ryan online in the week since MCPD shot him to death.

They sent me the below statement that asks people not to judge until they have all the facts. @wusa9 pic.twitter.com/D2GmahUSyt

Rhonda LeRoux, Ryan's mother, described losing her son as one of the greatest traumas imaginable.

"We can't sleep, we can't eat nor rest," Rhonda LeRoux said. "We just feel numb or empty inside."

She said there is no doubt in her mind that her son was suffering from depression. She believes he was drinking and experimenting with marijuana and had gone through a series of hardships, such as breaking up with his long-term girlfriend and losing his grandmother whom he was very close to.

"This tragedy leaves the Leroux family without their son and emotional scars that impact our community. Today we are thinking of Ryan Leroux’s loved ones, friends and neighbors who continue to mourn this devastating loss.

"The Council takes its oversight role extremely seriously, and we have been working collaboratively with Chief of Police Marcus Jones to ensure that the Leroux family has access to critical information throughout this investigation. We also are committed to ensuring that policies and procedures are reviewed to provide our police officers with the tools they need to successfully deescalate these types of situations. The Council has long advocated for appropriate alternative responses to mental health crises and has added funds to the budget two years in a row to expand the County's Mobile Crisis Outreach Teams. We must work to ensure that behavioral health professionals, with their specialized skill set, are readily available and on call for any potential crisis that arises.

"This fatal officer-involved shooting investigation is now in the hands of the Howard County State's Attorney's Office. Under the Law Enforcement Trust and Transparency (LETT) Act, which was enacted by the Council in 2019, the report from this fatal shooting will be available to the public once it is complete. This law aims to ensure that investigations into officers involved in the death of a civilian are independent, impartial and transparent to further enhance police accountability.

"We are unified in our ongoing commitment to continue working with our community members and law enforcement leaders to provide the resources and support needed to help protect the lives of all residents, as we continue our efforts to reimagine public safety, improve transparency and rebuild trust between our community and our public safety institutions."