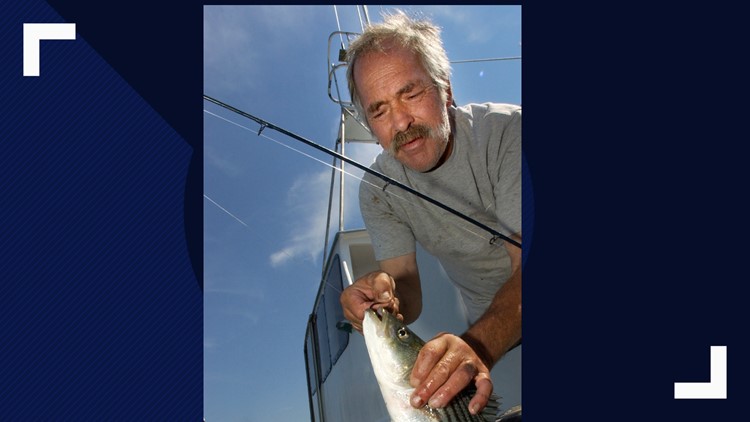 Photo by: AP
Bill Brown, of Gloucester, Mass., prepares to release a rockfish he caught from his 35-foot fishing boat.

MARYLAND, USA — Maryland will continue to focus on reducing the number of “dead discards” as it plans how to comply with new restrictions on fishing for Rockfish designed to reduce the take up and down the east coast by at least 17%.

After a meeting April 30, The Atlantic States Marine Fisheries Commission (ASMFC) directed its member coastal states from Maine to North Carolina to achieve the reductions in response to a steep decline in fish populations.

The number of spawning female rockfish, also known as striped bass or stripers, is now at is lowest level since the species recovered from the brink of extinction, with the help of fishing moratoriums in the late 1980’s.

Each state will have to decide how to handle the reductions.  Virginia has already cancelled its trophy rockfish season.

In Maryland, the focus will be on reducing the huge numbers of “dead discards” that happen when recreational fishermen catch and release large numbers of undersized rockfish as they attempt to reach the limit of 2 legal-sized fish per day. The minimum size for recreational harvest during the popular summer and fall seasons is 19 inches.

“Maryland emphasized that the most recent science and data shows that any measures that do not address this problem directly will not result in conservation,” said a statement from the Maryland Department of Natural Resources issued after the ASMFC meeting.

“In 2015, ASMFC increased the minimum size for “keeper” fish, a well-meaning attempt to protect striped bass population that instead was counterproductive, leading to increased mortality,” the agency statement said. “Every fish that is hooked, removed from the water and handled is at risk of dying when placed back in the water. Following the size change, the number of dead discards have actually increased as anglers catch and release fish to find keepers, thus increasing the number of fish that were handled.”

Recreational, charter and commercial fisherman have all loudly denounced the number of “floaters” that are seen in Chesapeake Bay water. This happens particularly during the hottest months of the summer when oxygen is low, fish become stressed and schools are concentrated into small areas where fisherman can more easily locate and catch them in large numbers.

Maryland already requires fishermen to use “circle hooks” when fishing with chum and live baits.  The unique shape of the hooks are designed to hook the fish in the jaw rather than fatally lodging in a fish’s gut when it swallows a bait.

The department is also trying to educate fisherman on proper handling of fish they intend to release.

The state is encouraging all other east coast states to do the same.

While state regulators appear to be focused on reducing fish mortality from catch-and-release recreational fishing, they have not closed the door to further restrictions on the length of seasons, or additional limits on the numbers of fish than can be harvested.

“Maryland will continue to make conservation decisions based on the best available science for the long-term future of striped bass in the Chesapeake Bay,” the agency says.

However, it has not revealed any specific proposals it might be considering.