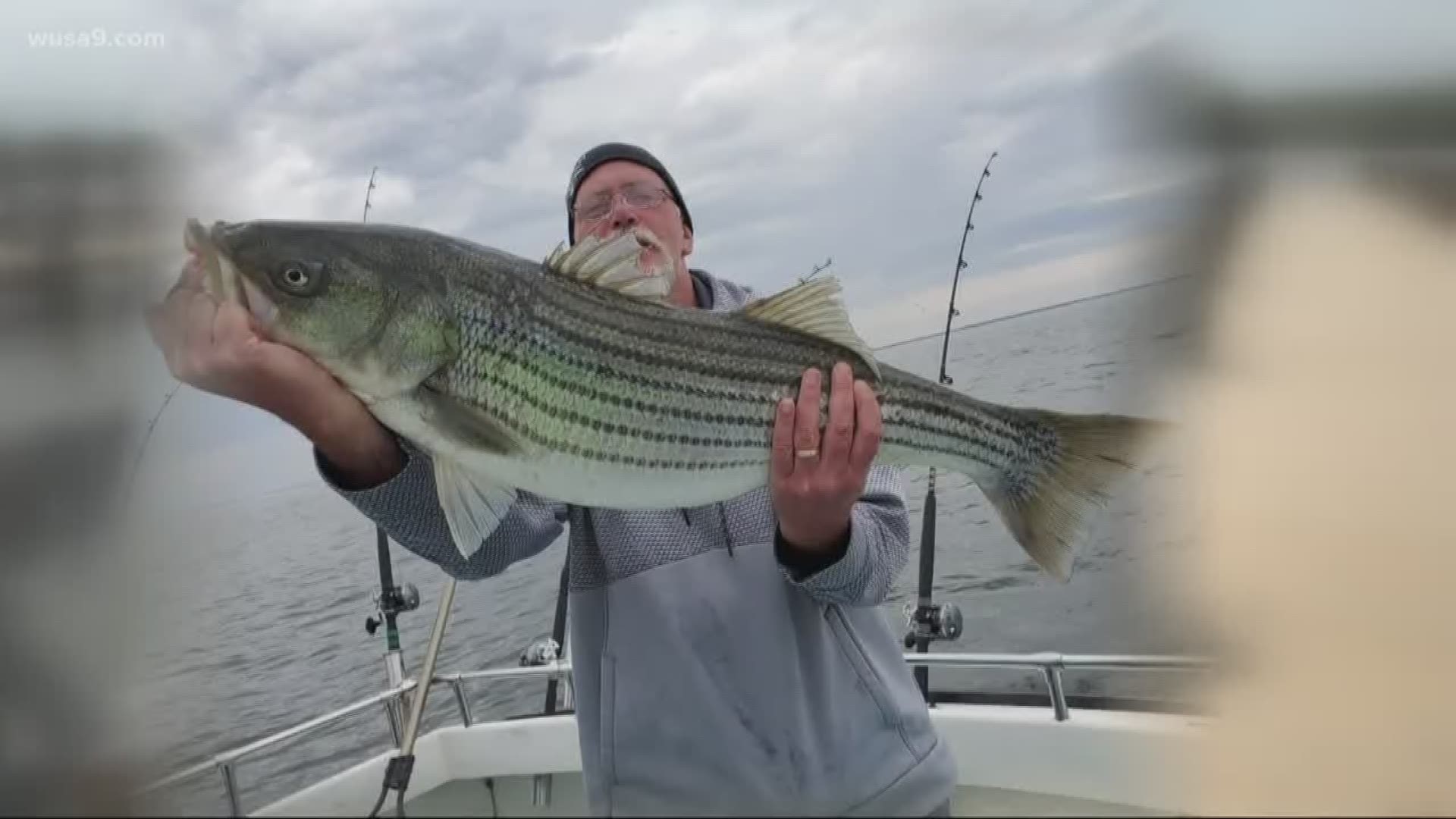 ANNAPOLIS, Md. — Anglers on the Miss Susie II landed two giant rockfish Monday morning from the Maryland portion of the Chesapeake Bay, but Cpt. Gregory Buckner is concerned that it can't go on forever.

"I won't be surprised if something has to be done here," Buckner said by phone from the helm of his boat as he guided another group out on the Chesapeake Bay for an afternoon session.

The fishing world was shaken when Virginia announced the emergency closure of it's spring season last week due to populations below sustainable levels for the past six years and estimates of over fishing since at least 2010.

The spring trophy season in Maryland allows anglers to keep one fish 35-inches or longer from April 20 to May 15.

Some of the fish tip scales at over 50 lbs and landing them is a huge thrill for recreational anglers and major boost for charter operators.

But fish of that size are almost all females. The season is timed so that most fish have already spawned but inevitably some are still carrying millions of eggs each. Some scientists and anglers worry about the impact of taking the most productive large females out of the ecosystem.

Tuesday at a meeting of the Atlantic States Marine Fisheries Commission Maryland is expected to come under pressure to follow Virginia's lead.

"Maryland expects to have a better long-term picture of the fishery after the ASMFC meeting this week," wrote Maryland Department of Natural Resources spokesman Gregg Bortz in an email Monday.  "Following that process, with input from our stakeholders and our team of biologists, we will continue working to preserve, protect and restore the striped bass fishery."

A majority of the rockfish that roam the ocean up and down the east coast are bred and born in Chesapeake Bay waters. Maryland is the nursery for everyone else's fish and the population is suffering.

Rockfish, known as striped bass or "stripers" in other states, have a huge economic impact estimated at $500 million annually spent on recreational boats, fuel, equipment, charters and guides.

There is a lot at stake.

Buckner, the charter captain, does not favor shutting down the spring trophy season, but he is in favor of additional limits.

"Instead of one fish per person, we should limit the take to just one trophy fish per two anglers on the trip," Buckner said.  "There's a lot of meat on a fish that big and there's plenty for two people."

Bucker said large charter boats that can carry more than a dozen people should be limited to five trophy fish per outing during the spring season.

Buckner also favors controversial measures to protect fish at other times of the year, particularly during the summer season when smaller fish down to 19-inches may be harvested.

The experienced charter captain proposes a complete shut down of rockfish season during August and September, when water temperatures are hot and extremely stressful on the fish.

Those fish are dying in huge numbers after being caught and handled by anglers who release them after reaching their two-per-day limit.

"Some guys will go out in the summer and catch more than 100 fish. They only keep two. About 30 of the others they throw back we'll find floating dead out here," Buckner said. "There should be no targeting of rockfish during the hottest times when there's not a lot of oxygen in the water and the fish are stressed."

Buckner is unimpressed with Virginia's move to close it's trophy rockfish season.

He called it a "100 percent smoke and mirrors show" because Virginia continues to allow commercial netters to take egg-laden females headed to the spawning grounds in March, long before the recreational trophy seasons open.

"Virginia is preemptively making cuts because their commercial sector does not want to take any cuts on their quotas," Buckner complained. "They are the same commercial netters that kills thousands of pounds of egg-laden females in March with no size maximum."