There may be only one neighborhood in the country that can boast it's home to a former President, the first daughter of Donald Trump and the world's fifth richest man. The neighbors in Kalorama in Northwest D-C are trying to act blasé about the arrival of Barack, Ivanka and Jeff Bezos. 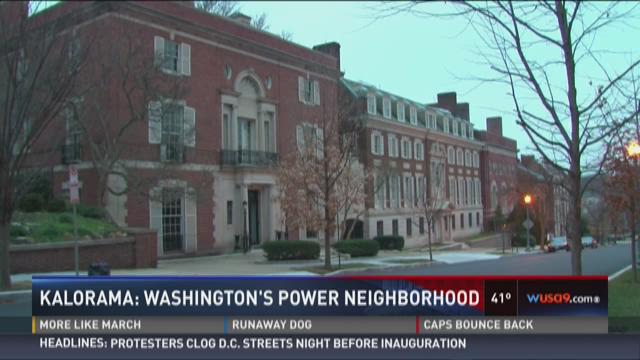 There may be only one neighborhood in the country that can boast it will be home to a former President, the first daughter of Donald Trump and the world’s fifth richest man.

The neighbors in Kalorama in Northwest, D.C. are trying to act blasé about the arrival of Barack, Ivanka and Jeff Bezos. But all the rubberneckers and Secret Service agents are making that tough.

Neighbors like to say they’re just like the rest of us. But they’re not many neighborhoods in America where live- in help is common, where movers are bringing art over from the White House, where Ivanka Trump is getting deliveries from UPS, and where Amazon owner Jeff Bezos paid $23 million cash for the former Textile Museum.

"A block that way is Jeff. Ivanka’s around the corner. Down that way a couple of houses is the Obamas, said food industry lobbyist Mario Castillo in the kitchen of his stately home of twenty years. He insists the red brick row house is "the double wide trailer" of Kalorama.

Crews are installing two guardhouses at the Obama’s home. But Mr. Obama is far from the only President to call Kalorama home. Woodrow Wilson still has a museum on S St. Taft, Harding, Hoover, and Franklin Roosevelt all lived here at some point too.

There are plenty of famous and powerful neighbors, but longtime resident Deedy Ogden is still fired up about the Mr. Obama moving in.

"This is more than ho hum. This is a big deal. And I hope he gets some good rest," said Ogden.

Kalorama is just Northwest of the area L’Enfant planned for the capital city in 1793. The rural hills were once owned by George Washington’s second cousin, who sold it in 1807 to the poet Joel Barlow. Barlow named it Kalorama, Greek for “fine view.”

The Obama’s are renting their nine bedroom, eight and a half bath Tudor home for 20,000 a month so Sasha can finish high school at Sidwell.

"I would be living in Hawaii, if I was him," said Ogden. "But he has a daughter. And it’s a good school."

Ivanka’s $5.5 million place is four blocks away, with a view of the minaret at the Islamic Center of Washington.

Out front, one of several old fire call boxes turned into art. The one at the Trump house is dedicated to Madame Chiang Kai –shek and other women of influence who have lived in Kalorama.

Bezos’ place may be the biggest house in Washington. All of the homes are drawing gawkers.

"I think it’s because we idolize these people and see ourselves in their shoes," said Andrew Souphis, 21, who was taking a break from his internship downtown the check out the mansions.

There’s only one business in the whole neighborhood. The little OpenDoor Market, where you pick up a bottle of wine -- and drop of your dry cleaning.

Maybe the three new neighbors will bump into each other there and work out some of the differences dividing our nation.

If you’re looking to buddy up to Ivanka, Barack and Bezos, there are a few homes for sale in the Kalorama. There’s even a seven bedroom, five bath Georgian Revival on Kalorama Circle for a relatively modest $3 million.