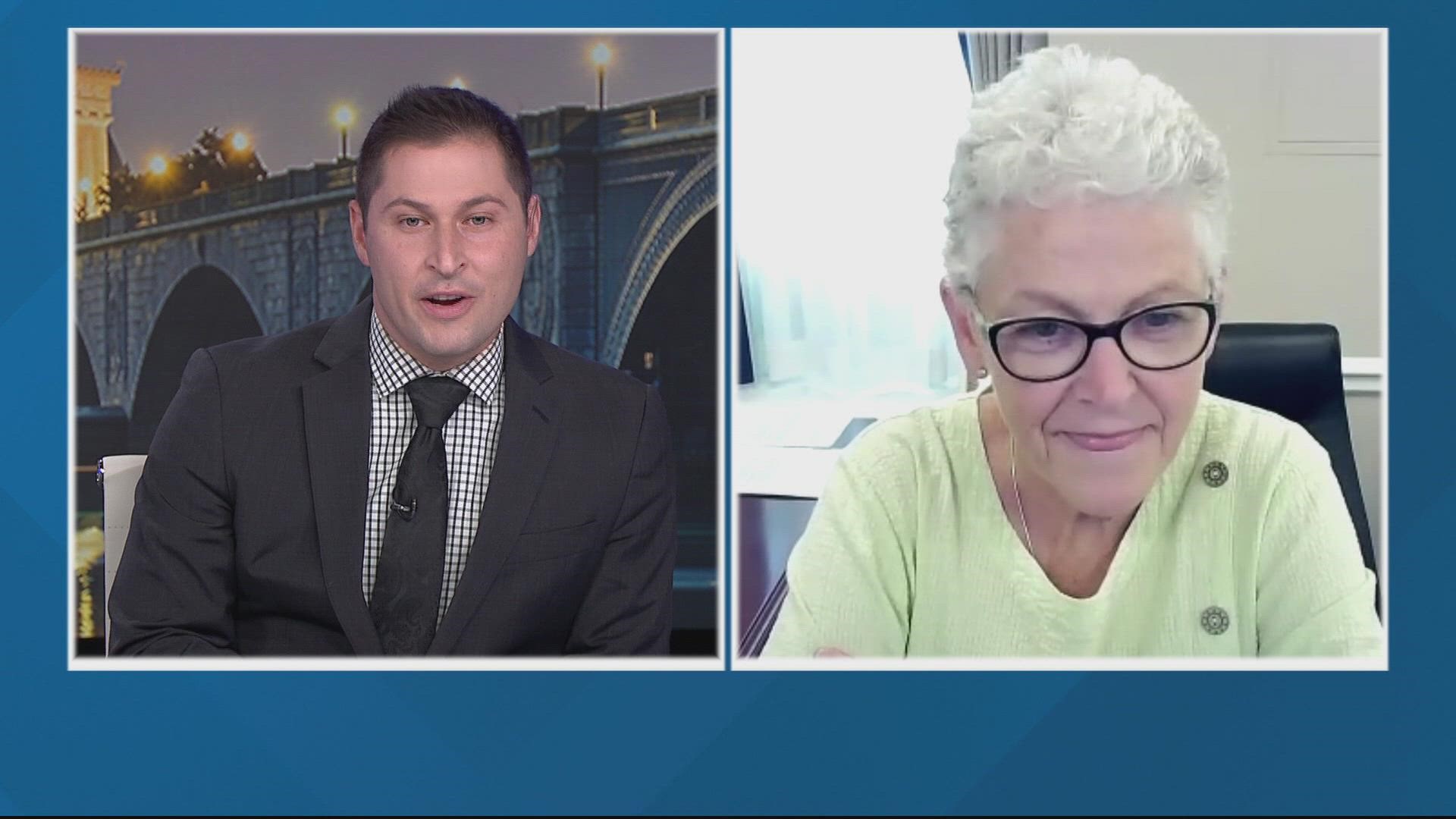 WASHINGTON — President Joe Biden campaigned on a platform that he would take steps to combat climate change.

Within hours of taking the oath of office, the President recommitted to the Paris Climate Agreement and signed an executive order to take an "Immediate Review of Agency Actions Taken Between January 20, 2017, and January 20, 2021."

In fact, tackling the "climate emergency" is the second priority—right under COVID-19— listed on the official White House website.

Watch the full interview below:

Below is a condensed version of that conversation:

Q: In August, Biden signed an executive order aimed at making half of new vehicles sold in 2030 electric; but, he's not gonna be in the White House in 2030, and it's an executive order, so it could be reversed once a new President takes over. So how could the administration make more lasting changes on this issue?

A: "Well, the most important thing I think you want to remember, Evan, is that that announcement, it wasn't just us standing around, it was all of the 'Big Three.' The Big Three automakers were there, and we've received commitments from the automakers across the world, frankly, that electric vehicles are it and they plan to capture that market. So we were excited to be standing with the United Auto Workers who recognize that, that their future is dependent on the United States, being very clear about our interest in electric vehicles, or we will be deferring that market to other countries."

"And so we're excited about all of the excitement around this, frankly. So we will definitely be moving ahead with rulemaking which gives it more permanency. But I think the most important lesson for us is that the car companies know what the future needs to look like, and they want to capture it right here in the United States of America."

Q: Do you think it's going to be possible without getting Congress on board?

A: "Well, I think Congress would, is terrific, it—they, they will be on board, I think we have a Clean Air Act that they've passed, that we're going to use as our sort of a guiding star and guiding light and how we move forward on rulemaking...and we think it will last because it doesn't make sense not to frankly. If you want the UAW to remain strong and you care about labor, that's what you do. If you want to give our kids a bright future, this is how you invest resources."

"And we're going to see us moving forward with building our EV infrastructure so that anybody that was worried about getting where they need to get to and back again, won't be worried any longer. And these cars outperform fossil fuel vehicles, and they're less expensive to maintain. And frankly, the parity with the cost between fossil fuels and EVs is getting closer every year. So we're looking at tax incentives for consumers. But you won't need it for long it is going to just simply be the way cars are manufactured."

Q: The President has talked about creating half a million electric car recharging stations by 2030. Are we still on track for that?

A:  "We're working with private sector companies, because, you know, we're moving in the direction in which the private sector wants to invest. And frankly, that's the best sign ever. It means we don't have to worry about the next administration if the business community has already embraced it."

"So we're working to make sure that we're doing this in a smart way—looking at places of work, looking at how we incent charging stations around apartments and condos where you may not have a plug in your own garage. So we're looking at doing this smartly and in concert with private sector investment as well."

Q: With severe weather causing major damage to coastal cities, especially those in the Gulf, when do the costs of repairing become too much? Are we eventually going to need to move away from certain areas altogether?

A:  "Well we're going to have to work with states and communities about how best to enhance resilience, and so the most important thing is to remember that the cost of doing nothing is extraordinary. You know, we know that climate change is real, it's happening, we can see it not just with the floods and the hurricanes, but with the droughts, the wildfires, you know, the heat waves that we're experiencing."

"...But we believe that both the bipartisan infrastructure deal as well as a Build Back Better plan is the way to save money. Every dollar you spend today is going to save you six in the future. So sticking your head in the sand and saying, 'I don't feel like spending money today,' just means that you and I will spend more tomorrow and potentially threaten the future that our kids have here."

Q: Some critics say why should the U.S. do anything if places like China and India are not going to do it?  Is there a scenario where the U.S. cuts carbon emissions and it's still not enough because of international polluters?

A: "The efforts that are articulated in rulemakings, and executive orders, and the work in the bipartisan infrastructure deal in the Build Back Better plan, all of that is going to save us money. All of that is real, we don't need innovation to move forward to deploy these solutions."

"...But we also have to recognize that this is an international worldwide issue. There is no question about that. But if the U.S. sits on the sidelines, we give every excuse to China and India and other large, largest countries in the world to sit on the sidelines. So we're fully in, we want to lead this effort."

Q: There's a lack of faith among young people that our leaders can address climate change with so much deadlock. Are they right? Is big, meaningful action possible?

A: "Well, I'm ready to hear from the young people everywhere because they're knocking on our doors, and they're telling us what they demand, and I love it. You know, there's nothing more exciting than seeing democracy at work."

"If you just put it down to that level, you will realize that they're making the demands they ought to and we must respond to it. And I think the President Biden's administration is fully prepared to go to the mat, because climate is a code red situation, and we're going to see that we invest for our young people the way they expect us to invest."

RELATED: How climate change is impacting the DC region