Here's why hundreds of National Guard troops are in DC

Guard troops from states like South Carolina are in D.C., and were captured by WUSA9 getting ready to be put on the streets of the District Wednesday evening. 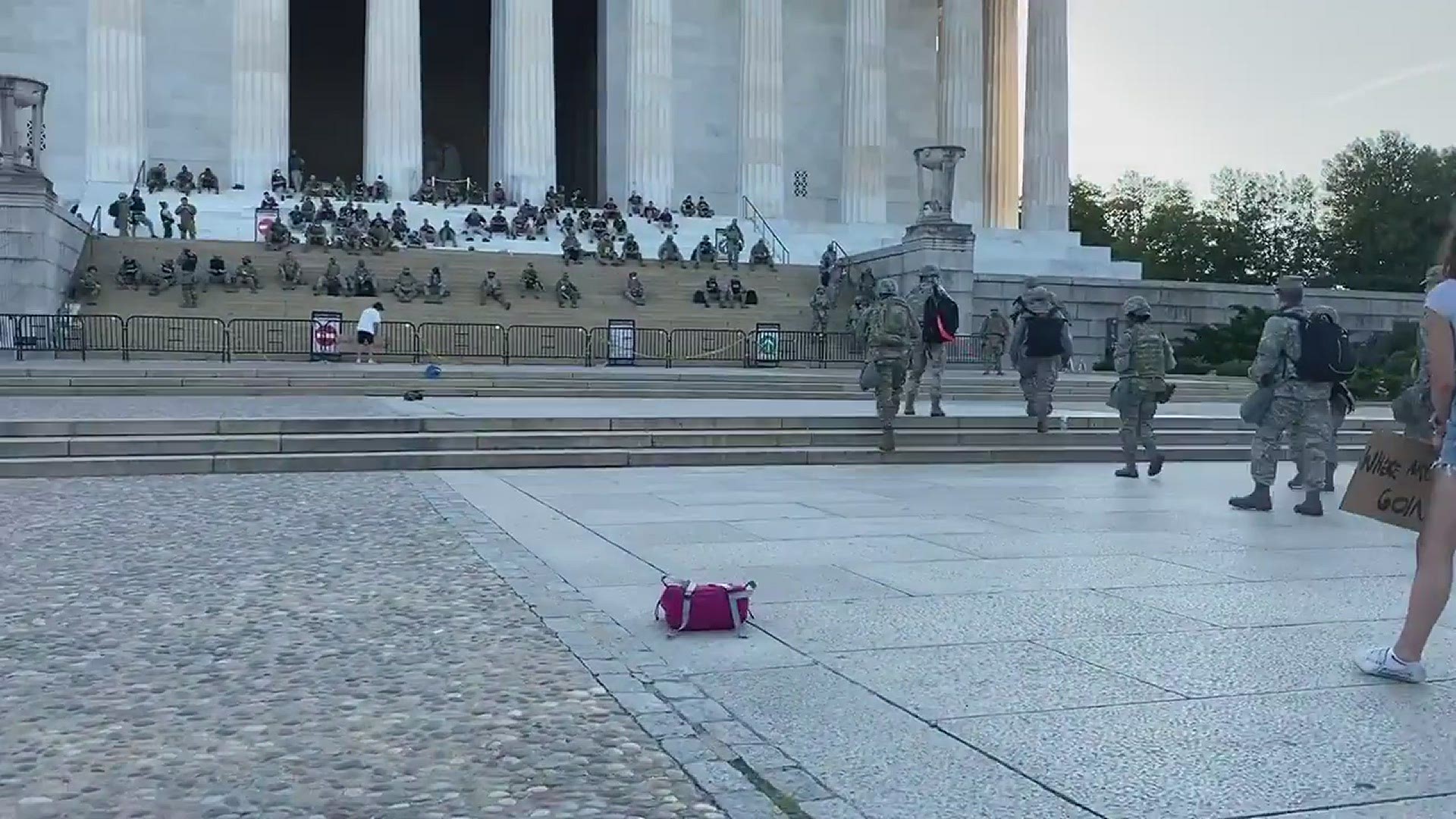 WASHINGTON — For the last six days, protests against police brutality and #JusticeForGeorgeFloyd swept through the District with increasing tension between law enforcement and demonstrators.

In response, more National Guard troops have been sent to D.C. to help enforce safety and help supplement the presence of local and federal police. Across the protests, law enforcement has ranged from Secret Service to US Park Police, D.C. Police, plus the FBI and DEA.

Low flying Black Hawk helicopters were seen close to District buildings, flying in airspace that is usually restricted. Members of the National Guard lined up on the Lincoln Memorial Tuesday afternoon, sending shock waves on social media as people shared the stark visuals online. Part of their job is to protect monuments in the National Mall that have been vandalized during protests.

Guard troops from states like South Carolina are in D.C., and were captured by WUSA9 getting ready to be put on the streets of the District Wednesday evening.

So why the heavy military presence in Washington? Who has the authority to send them in, considering DC is not a state? If you are protesting, does it matter who you interact with and what authority they have? Here's a breakdown:

Why can the President send in so many troops here in DC? What makes DC different?

“If a city or state refuses to take the actions that are necessary to defend the life and property of their residents, then I will deploy United States military and quickly solve the problem for them," Trump announced in the Rose Garden on Monday.

How can he do that?

Trump could invoke the Insurrection Act, which is a loophole law that allows the president to send the US military into towns and cities to help squash unrest.

What is the National Guard?

They are trained to provide additional help in cases like hurricanes and floods, but also for large demonstrations like this past week. Title 32 of the United States Code allows them to leave their regular everyday jobs to help serve what's needed for the Guard and U.S. Military.

Who can deploy the DC National Guard, and why aren't Virginia and Maryland guard troops in DC?

Governors are usually in charge of ordering national guard troops to places. And can be done for a variety of reasons, including helping people during national disasters. The guard has been used to implement COVID-19 testing in D.C. and Maryland.

Virginia Gov. Ralph Northam said he refused to deploy Virginia's guard for a couple of reasons, including that he wasn't directed by D.C.'s Mayor Muriel Bowser. “It was not requested by the mayor of Washington, D.C.,” he said.

“I am not going to send our men and women in the uniform of a very proud National Guard to Washington for a photo op," Northam said, referring to Trump’s photo-op at St. John's Church, right after protesters were moved back by law enforcement by force, which included tear gas.

Maryland Gov. Larry Hogan will be sending 120 Maryland National Guard Troops to the District to help with protests, according to a story by the Baltimore Sun.

RELATED: VERIFY: Does DC have a cash bond?

RELATED: How do we go from protests to policy?

RELATED: 'A symbol, not a solution' | The Kennedy Center will dem its lights for nine nights to honor George Floyd