These are DC, Maryland & Virginia's most dangerous roads for cyclists & pedestrians

WUSA9 analyzed three years of crash data to determine which DMV roadways had the most collisions involving cyclists and pedestrians. 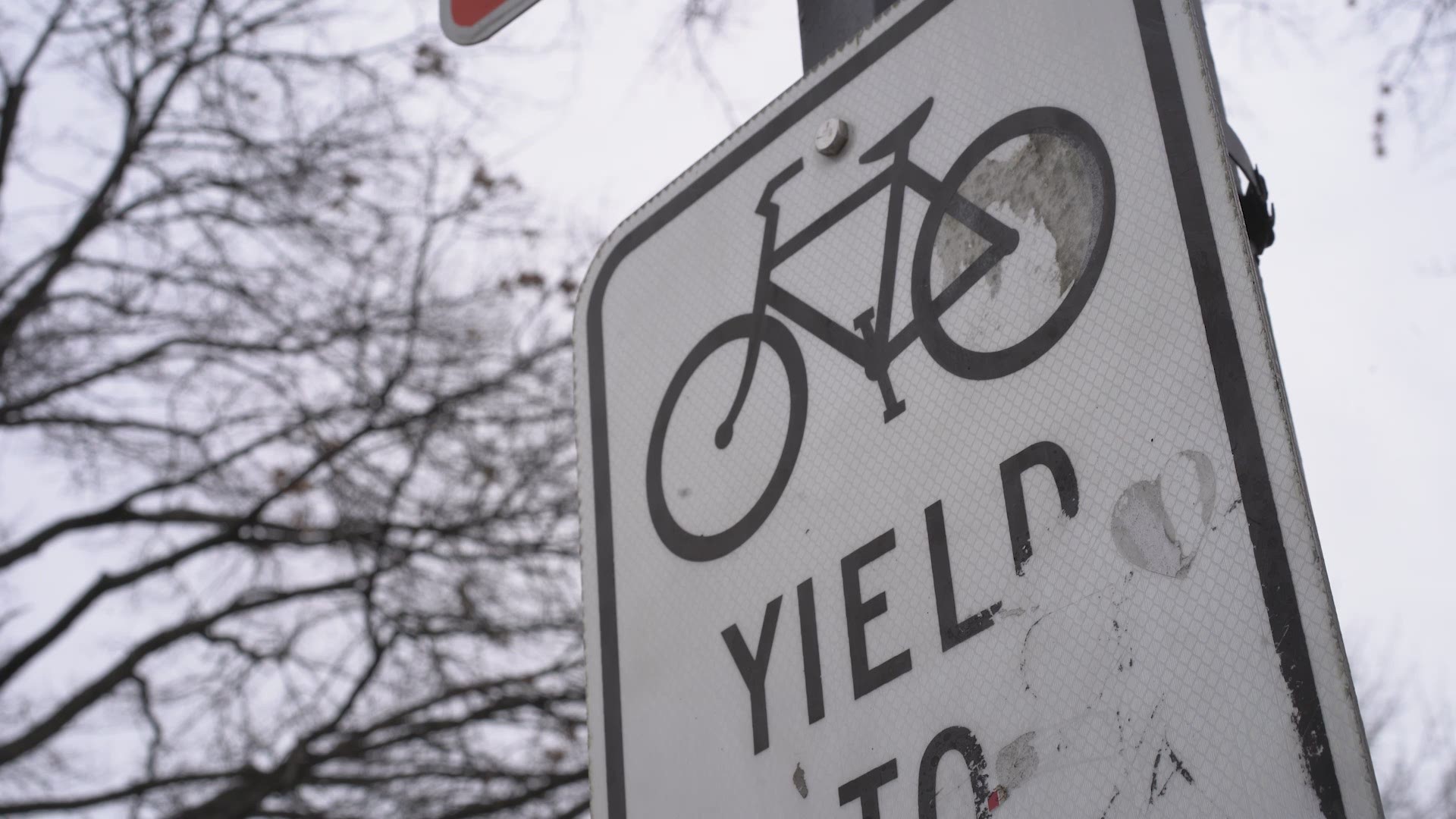 WASHINGTON — Less than five hours into the new year, the District of Columbia had already recorded its first traffic death of 2020.

A driver making a turn near the intersection of Minnesota Avenue and L'Enfant Square SE left the roadway and struck Loleita Gross, 32, of Southeast D.C., as she was standing on the sidewalk in a small park. She was pronounced dead at a hospital a short time later. The driver remains unidentified.

Gross’ death reflects the challenges of D.C.’s goal to achieve “Vision Zero” – Mayor Muriel Bowser's pledge that the District would have zero traffic deaths or serious injuries by 2024.

While that pledge was embraced by safety advocates when it was launched in 2015, many pedestrians and cyclists in D.C. still see room for improvement.

'I COUNT MYSELF AS LUCKY'

"My story is a perfect example of the fact that paint is not protection,” he said.

The Shaw resident said he was biking down T Street NW, near 13th Street, in the designated bike lane, when a ride share vehicle suddenly pulled into his path. In order to avoid the obstacle, Babatz said he was forced to make a split-second decision.

“I had to go into the traffic lane,” he said.

But, Babatz said he realized another driver was speeding down T Street in the traffic lane at the same time. He immediately bailed from his bicycle.

“A couple of broken ribs is relatively mild compared to what has happened to other friends and neighbors in the city,” Babatz said.

It turns out, Babatz’s accident occurred in one the most dangerous areas for pedestrians and cyclists in District.

"I count myself lucky,” he said.

THE DMV'S MOST DANGEROUS ROADS

WUSA9 Digital Investigative Reporter Jordan Fischer analyzed traffic collision data from D.C., Maryland and Virginia covering a three-year period, from August 2016 to August 2019, to determine which streets had the most collisions involving cyclists and pedestrians.

In D.C., three roadways in Northwest proved to be particularly dangerous for locals who opt to walk and bike local roads.

Use the map below (or click here if it doesn't load on your device) to explore bicycle crash data for all of Maryland, Virginia and D.C. from August 2016 - August 2019. You can compare bike and pedestrian crash hotspots by using the layers tab:

Data pulled from the Metropolitan Police Department's (MPD) COBALT crash data system showed there were 30 collisions between drivers and pedestrians in the area of 14th Street NW between H and L Streets from August 2016 through August 2019.

The second most dangerous stretch of road in the District is found further north on 14th Street NW, in the Columbia Heights neighborhood, between Harvard and Quincy Streets.

The area most prone to collisions involving cylists and pedestrians in D.C. was the area where Tim Babatz experienced his accident: the U Street Corridor.

Use the map below (or click here if it doesn't load on your device) to explore pedestrian crash data for all of Maryland, Virginia and D.C. from August 2016 - August 2019. You can compare bike and pedestrian crash hotspots by using the layers tab:

The findings did not surprise Rachel Maisler, a local advocate well-known for cyclist safety and member of D.C. Families for Safe Streets.

She said the mix of traffic congestion and nightlife activity in and around U Street can make the area unsafe for cyclists and pedestrians.

"[There are] lots of ride share vehicles and you have drunk people who are traveling in cars or driving cars,” she said.

WUSA9 took a bike ride with Maisler to see firsthand other challenges that can make cycling dangerous for District locals.

One of the most common obstacles, she pointed out, were blocked bicycle lanes in Northwest D.C.

"The bike lane is perpetually blocked,” Maisler said of the bicycle lane along 14th Street near the Columbia Heights DC USA complex. “As you'll see, I don't even ride in the bike lane here."

In D.C., it is against the law for cars to stop, stand or park in any portion of a bike lane. Maisler said when drivers suddenly pull into those bike paths, cyclists can sometimes be left with no option but to swerve into traffic.

“You've got parked cars, bike lanes, moving cars and you have a lot of commerce, churches, businesses and restaurants [along 14th street] where people are constantly coming and going and loading and unloading and cutting across the bike lane,” she said.

“We’re losing the bike lane,” Maisler said as she cycled down 14th Street.

Of course, cyclists and pedestrians can be at fault for accidents, too.

Will filming this story, WUSA9 cameras caught pedestrians jaywalking and looking down at their phones while crossing D.C. streets – and even a few cyclists blowing past stop signs without slowing.

It's not unprecedented for MPD officers to cite cyclists for illegal traffic actions.

Last June, a driver was traveling eastbound on the 1000 block of U Street NW when, according to an MPD traffic crash report, a cyclist suddenly changed into her lane without giving a proper hand signal.

While the driver ultimately collided with the cyclist, MPD still chose to issue the cyclist a “notice of infraction” for failure to yield the right of way.

Marootian said part of the equation to making DC streets safer is by working to reduce vehicular congestion. He said DDOT plans to eventually create a pick-up and drop-off zone for ride share vehicles in Columbia Heights to deter them from blocking dedicated bike lanes.

"So, for DC USA, on 14th Street in particular, we are creating a pick-up and drop-off zone where there is currently metered parking to allow for that activity to happen," Marootian said.

He also said D.C. is working to cut down on car congestion by creating dedicated bus lanes around the District like the ones that already exist along Georgia Avenue and H and I streets Northwest.

DDOT says there are now 600 LPIs across all D.C. intersections.

"We want everybody to be safe as possible when they’re in the intersection and LPIs help that,” Marootian said.

However, some cyclists say what D.C. really needs is more protected bike lanes.

Protected bike lanes are physical barriers that separate cyclists from drivers. A few protected bike lane routes can be found along 15th Street NW and Pennsylvania Avenue NW in the District.

DDOT says it plans to add more than 20 miles of protected bike lanes to D.C.'s transportation network by 2022.

“We are prioritizing safety measures such as protected bike facilities,” Marootian said.

But, both Babatz and Maisler point to New York City as an example of the pace D.C. needs to be setting when it comes to installing protected bike lanes across the District.

“Unfortunately, the progress, in the last couple of years, that we’ve been making in adding additional protected bike lanes has been way too slow," Babatz said.

DDOT has a little more than 11 miles of protected bike lanes for the 1,100 miles of federal and local streets in the District.

“All of us need to get around the city safely,” Babatz said.