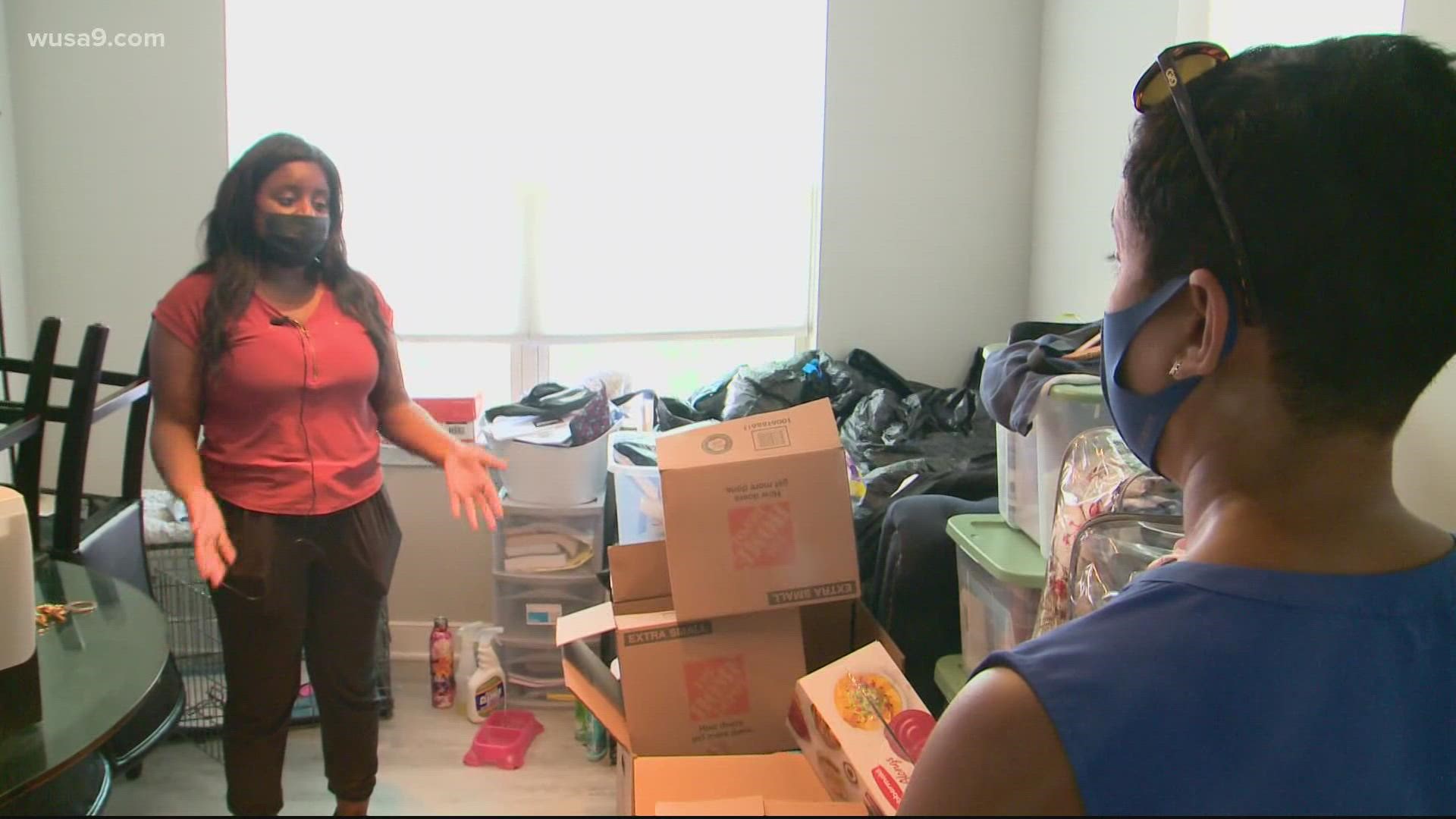 WASHINGTON — Standing next to a pile of boxes and bags, Jaztina Somerville says she's ready to move out of her home, but she still needs to find a place to go.

“I feel homeless,” she said with tears rolling down her cheeks. "Today is actually the anniversary of my closing -- it's been four years."

Somerville and many of her neighbors purchased their homes on Talbert Street, Southeast back in 2017 through the District’s first-time homebuyer program.   The developer, Stanton View LLC, received city subsidies to develop the project, but Stanton View has now filed for bankruptcy and is under investigation by the Office of the Attorney General.

Now four years later, residents and engineers report the foundation continues to shift sliding dangerously downhill and pushing out the retaining wall in the back of the property, cracks inside the homes are growing and the water pipes are broken to the point that gravel can be seen inside.

After engineers deemed Somerville’s home unsafe, she was told to evacuate. But her insurance won’t cover a long-term stay at a hotel.

“I’m basically depending on the District to right their wrong in order to have someplace safe for my family to be,” she said.

Brittney Bennet and her two sons left their home back in May after raw sewage destroyed the walls and floors. Her home was condemned, and the drywall has been removed from most of the living space.

RELATED: 'I can go back to being homeless' | DC homeowners ask leaders for help after developer allegedly sold dangerous homes

Now, the homeowners are receiving some relief from the city. A new task force offered to forgive some of their loans, reinstate their first-time homebuyer status and give residents $7,000 towards relocation expenses.

But on Sunday, the homeowners received legal documents on their doors.

“Once we receive this money from the city our insurance is obligated to pay them back the money,” said ANC Commissioner and resident Robin McKinney.

McKinney also explained that homeowners are required to claim the money on their taxes. For disabled residents, like Regina Haire, that’s a problem.

"It disqualifies me for benefits I already receive if I have additional income,” Haire said.

“It’s a slap in the face for everyone,” McKinney added. "So far no one has signed this document until it's revised and rewritten.”

Davina Callahan sent her daughter off to school for her first day Monday, but knows the excitement of the first day will be overshadowed by the stress of the possible move.

“Because we’re African American, because we’re in Ward 8, because we’re women we’re not getting the support," Callahan said. "The mayor hasn’t even come out to say, ‘let me see what’s going on.'"

Residents tell me legal documents now say the city will seek reimbursement of the $7K from homeowners' insurance. Also, they're asked to fill out a W9, disabled residents say that would put their income in a different tax bracket making them illegible for federal disability. https://t.co/6XUPnjsi8y

According to the homeowners’ lawsuit, Stanton View LLC failed to post the required warranty security to ensure against structural defects.

That developer did not return calls from WUSA9, but the DC Department of Consumer and Regulatory Affairs told WUSA9 the developer had the proper permits and the defects were not detected during inspections. An agency spokesperson said it’s up to private companies to ensure their work is safe and up to par. However, as a result of this case DCRA “recently established requirements mandating proactive reporting of unsafe structural conditions.”

“I don’t believe I purchased a home for things to end like this,” Somerville said.
"I’m really depending on my faith that this isn’t all for not and things will come through for myself and my neighbors.”