The incident happened just before 3 a.m. Wednesday when an individual contacted police reporting a man "unconscious" in a vehicle at a traffic light in Northeast DC. 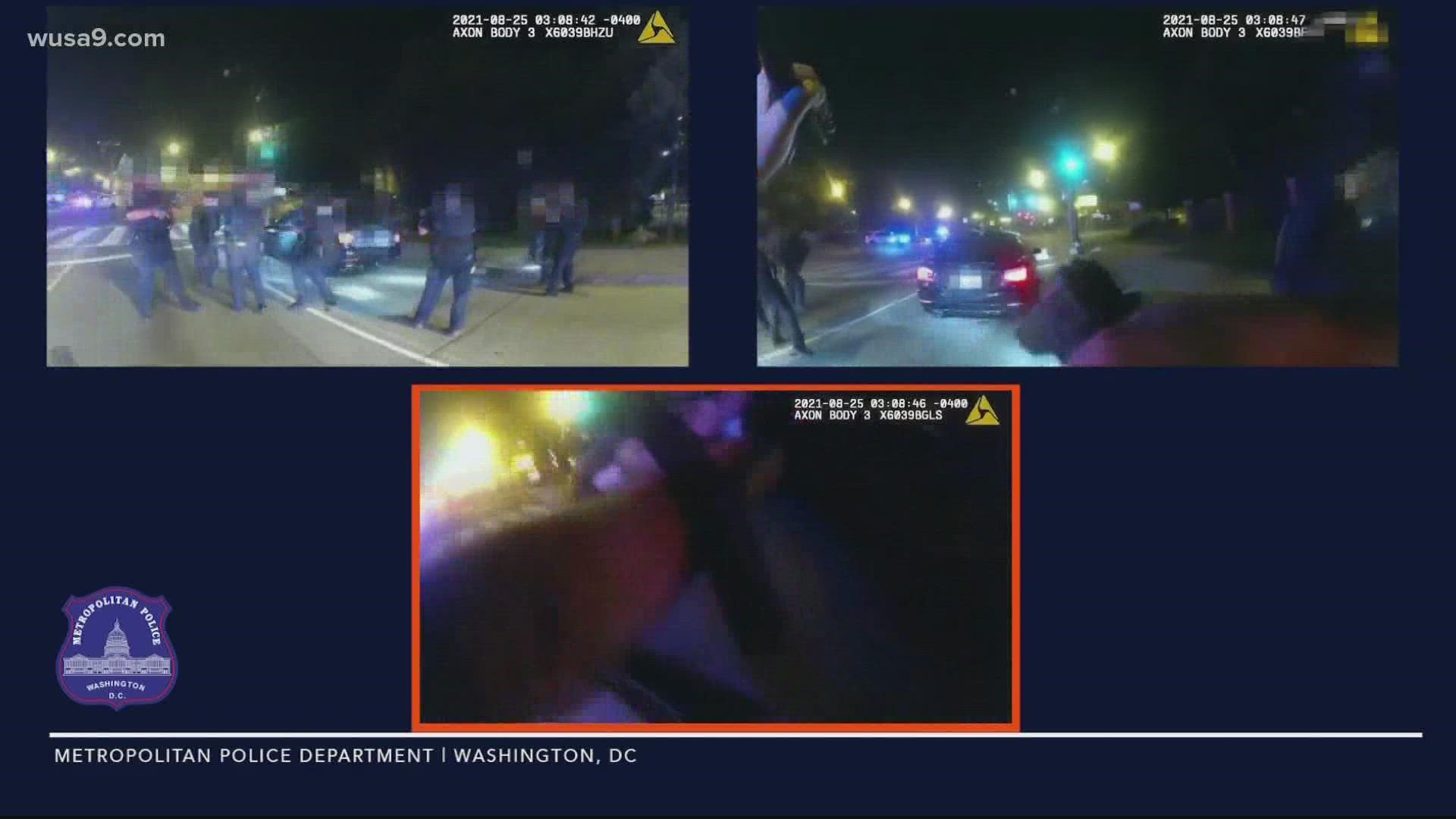 WASHINGTON — The D.C. Police Department released body camera video that shows the moments before and after police shot and killed a 27-year-old man found asleep behind the wheel while sitting at a traffic light in Northeast D.C. early Wednesday morning.

MPD released two different videos. The first is a 12-minute full recounting of the incident, from the camera angle of the officer who fired shots. The second is a 5.5-minute compilation that shows side-by-side footage from three different cameras before and during the shooting.

The longer video shows an officer with a ballistic shield approach several other officers surrounding the vehicle 27-year-old Antwan Gilmore was in. Officers engaged with Gilmore who they said was initially found unconscious. The footage captured the moment the officer noticed Gilmore was waking up.

Close to 7 minutes in, you hear multiple officers shout "don't move" and "watch the hands" just before 10 shots are heard.

Police said at this point, Gilmore reacted and moved the vehicle forward. Officers asked him to stop the car and he complied before moving the car forward. That's when police say the officer fired at the moving car, and shot Gilmore.

In the shorter video, you see the shooter's camera, a camera from behind the car looking in and a camera behind and to the side of the driver's side of the car. From the three perspectives, you can see the officers attempting to engage with the driver, you see guns raised and you see the moment the car initially moves forward and stops and then drives off again as shots are fired. What you cannot see is any of Gilmore's reactions inside the car.

GRAPHIC WARNING: You can watch the full body cam video from the perspective of the officer who fired his weapon below:

After reviewing the body-worn camera video, Chief Contee said it was very difficult to see what that the officer was seeing and what the officer may have thought was the threat. Contee has said that much of the video appeared obstructed due to a ballistic shield blocking the officer's view of the camera. He said the incident will be fully investigated and will go to the US Attorney's Office for further investigation.

Contee said only one officer fired shots at the vehicle.

The only item recovered from the vehicle was a firearm police said was on the right side of Gilmore's waistband. Contee said after reviewing the video, it remains unknown if the gun was removed from the waistband at the time of the incident. He said police do know that the gun and the car Gilmore was in was not registered to him.

Police learned there was an open warrant out for Gilmore's arrest for an incident that happened in late 2020, Contee said. But, officials said officers did not know of the active warrant during the encounter.

Contee said the officer who fired all 10 shots at the vehicle had been on the force for over 10 years and was assigned to the department's 5th District.

A separate video obtained by WUSA9 from a woman who said she witnessed the whole thing shows another angle of what ultimately led to Gilmore's death.

Jordan White, who lives in D.C., said she was driving to a friend's house who had just lost a family member around 3 a.m. She noticed several officers around a car, so she turned around and started filming on her phone.

The video shows the car lurching forward and then stopping for a few seconds, before moving out of frame. White can be heard saying, "Oh my god!" right before WUSA9 counted 10 shots fired.

Contee said during a Wednesday morning news conference at least four to five officers engaged with Gilmore during the encounter, but the chief believes only one officer fired a shot. In White's video, WUSA9 counted at least eight officers around the car before shots were fired.

The incident happened just before 3 a.m. Wednesday when an individual contacted police reporting a man "unconscious" in a vehicle at a traffic light on Florida Avenue and New York Avenue. Contee said when officers arrived at the scene they noticed Gilmore had a gun in his waistband.

Contee said officers immediately deployed a ballistic shield and attempted to wake Gilmore up. He said at that point Gilmore was "engaged by officers," shots were fired and Gilmore was struck by a bullet. After getting shot, he sped off hitting a tree.

Gilmore was taken to the hospital where he was pronounced dead, Contee said. No officers were injured in the shooting.

RELATED: Police: Officer shoots, kills man after he was found asleep at a traffic light with a gun in the car