A majority of protesters WUSA9 saw at Freedom Plaza were not wearing masks. Could it lead to high COVID-19 case numbers in the District? 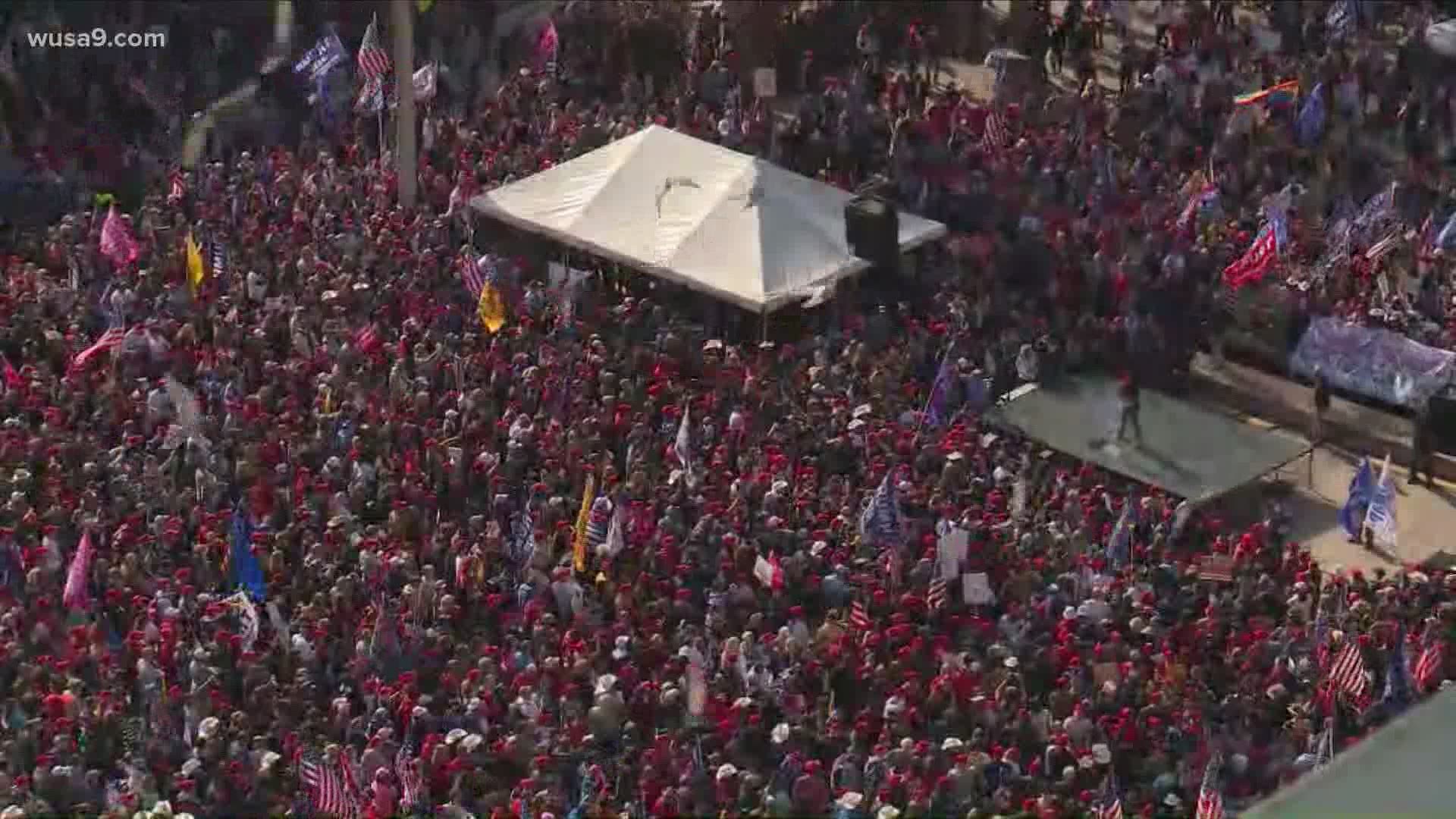 WASHINGTON — Thousands of people came to the Million MAGA March on Saturday, but many of them didn't wear masks. That's despite DC's mask mandate.

Our WUSA9's Mike Valerio reported from Freedom Plaza that it seemed a majority of the protesters gathered were not wearing masks.

Many protesters were in DC to support unfounded election fraud claims and to support President Donald Trump's re-election campaign. There were a few counter-protesters also in the area, but not many.

Most people who wore masks included families and older people, according to what our WUSA9 reporters at Freedom Plaza saw.

For those wearing masks at Freedom Plaza, a lot of them had American flag or patriotic-themed masks. There were also masks that read "Trump 2024."

While there have been protests for a variety of reasons this summer and fall that have broken social distancing guidelines, this is one of the first times we've seen protests where the wearing of masks was almost completely ignored by those who were in attendance.

1. Persons leaving their residences shall wear a mask when they are likely to come into contact with another person, such as being within six feet of another person for more than a fleeting time; and

2. Persons who are operating or a passenger in a taxi or a vehicle that is part of a Transportation Network Company, or who are a passenger on or operator of any form of public transit in the District, including a bus, subway, streetcar, shuttle bus or van, or school bus, must wear a mask at all such times.

(*There are stipulations for this mandate when exercising in Washington D.C.)

President Trump himself circled Freedom Plaza around 10 a.m. in his Secret Service-protected caravan, waving to the crowd from his car. He did not leave his protected vehicle or directly expose himself to his supporters that were or were not wearing masks.

D.C. Police Chief Peter Newsham said during a news conference on Monday that in the next 3 to 5 days that he will give some consideration to getting the MPD officers in close contact with unmasked demonstrators tested.

DC, Maryland and Virginia have stressed the need for regional communities to wear masks in the midst of the second wave of rising COVID-19 cases across the United States.

Maryland's Gov. Larry Hogan (R) has been one of the most outspoken Republicans on using masks. Something that his party's politicians have been split on. With some more right-wing parts of the party not justifying the use of masks to stop the COVID-19 spread.

“It’s not that hard, just wear a damn mask," Hogan said in a news conference of Maryland's COVID-19 cases. "The truth is that this virus will be with us well into next year, and our worst time may be over the next few months."

LATEST — MAGA March about to begin. Not a million. Here’s what we see above Freedom Plaza just before noon. @WUSA9 @CBSNews #MillionMAGAMarch2020 pic.twitter.com/hg7t46g63e

Northam has also put more restrictions in Virginia due to combating the national rise in COVID-19 cases.

Virginia's newest restrictions include a limit on public gatherings, indoor and outdoor, which are now reduced to 25 people. Also, alcohol sales must stop at 10 p.m. and bars, restaurants must close at midnight.

"COVID-19 is surging across the country, and while cases are not rising in Virginia as rapidly as in some other states, I do not intend to wait until they are. We are acting now to prevent this health crisis from getting worse,” Northam said in a news release to media last week about the updated COVID-19 restrictions.

Last Friday, the National Park Service issued an updated permit for one of the rallies, upping the participant size from 50 to 10,000.

The National Parks Service was not able to provide an estimate of the crowd size Saturday. Around 1 p.m., demonstrators began moving from Freedom Plaza to the Supreme Court.