Metro Blue Line defect that caused derailment could have been 'catastrophic,' NTSB says

In a release Monday, WMATA said the reduced service is expected to last through at least Sunday, October 24. 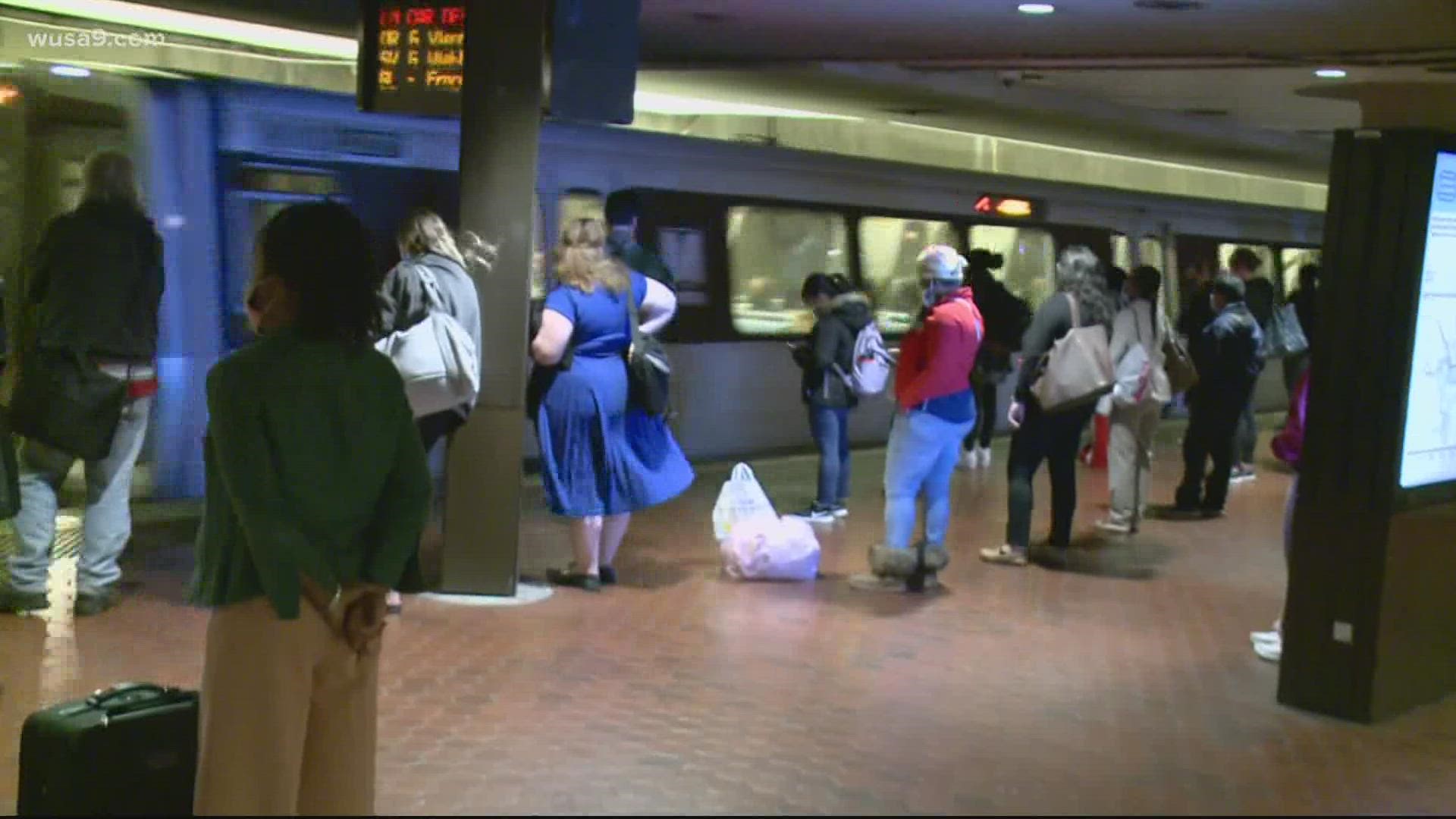 WASHINGTON — Metro, and manufacturer Kawasaki, have known for years about problems with the wheel assemblies in the transit system's newest $2 million rail cars, the transportation safety board said Monday.

One of those 7000 series rail cars came off the track in Rosslyn on Oct. 12, and while no one was killed or critically injured, the National Transportation Safety Board (NTSB) said the incident could have been "catastrophic."

"We are fortunate that no fatalities or serious injuries occurred as a result of any of these derailments, but the potential for fatalities and serious injuries, was significant," NTSB Board Chairman Jennifer Homendy said at a news conference Monday morning at the safety agency's Washington headquarters. "This could have resulted in a catastrophic event."

The D.C. Metrorail Safety Commission ordered Metro to pull nearly 60% of its rail fleet from service Monday after its safety oversight board found a recurring problem with the axles on the Metro's newest railcars, the agency said. The Washington Metropolitan Area Transit Authority (WMATA) said the remaining 40% of trains will run every 30 minutes.

In a release Monday, WMATA said reduced service is expected to last through at least Sunday, October 24. Beginning Tuesday, trains will operate every 15 minutes on the Red Line and 30 minutes on all other lines. Silver Line trains will only operate between Wiehle-Reston East and Federal Center SW.

Passengers reported waits of as long as an hour during Monday morning's rush.

"Really, I'm upset about that, because I have to get to work, and I work all the way out at Dulles," airport wheelchair agent Zachary Richardson said. "And I'm like, that's really not very easy for me."

All this is happening because the NTSB found defects in several of the 7000 series railcars while investigating the derailment of a Blue Line railcar (train 407) on Oct. 12. During that incident, almost 200 people were safely evacuated from a derailed Metro Blue Line train near Arlington Cemetery.

While investigating the derailment, NTSB found that an axle of the railcar that derailed was "out of compliance with the 7000 Series specifications for the wheel and axle assembly," according to an order issued by the Washington Metro Safety Commission (WMSC).

The same problem was discovered in other 7000 series railcars that were not involved in the derailment, according to NTSB.

During a news conference Monday morning, NTSB said they found evidence that the Blue Line rail car derailed and rerailed at least twice before it finally got stuck in the tunnel before the Arlington Cemetery. They believe there could have been more derailments on the days leading up to the incident.

NTSB said investigators found broken sections of the brake disks along the route the Blue Line took that day. This has led them to believe the train derailed and rerailed several times between Franconia, Largo and Arlington Cemetery.

Homendy said when train 407 derailed there was arcing that could have caused a deadly fire before the power to the track was shut down.

All of the trains being removed from service are 7000 series railcars, according to the Washington Metrorail Safety Commission. Those cars were first unveiled in 2015.

The safety commission ordered Metro to remove all of the 7000 series railcars starting Monday, develop a plan under the oversight of the W.M.S.C. to assess the cause and to detect and prevent these issues and implement a plan for the safe return to service of these railcars.

NTSB added that WMATA was made aware of about 52 failures of the 7000 series railcars since 2017, with 39 prior issues this year alone. The number of failures may increase throughout the course of NTSB's investigation considering that only about 500 railcars were inspected out of the 748 cars. NTSB said they learned that WMATA was working with Kawasaki to determine safety issues but are still actively investigating if WMATA took appropriate actions to deal with the reported failures.

Homendy said NTSB may at some point issue a recommendation of the make of the railcar if more issues are found across the U.S.

The agency does not yet know how common the issue may be, or how long the Metro will be running at reduced capacity, but commuting delays may be the norm for a while. Metro pulled its 6000 series cars out for a coupling issue in November 2020 and they still aren't back in service.

A spokesman for Metro said the agency is working on a public response to the NTSB’s findings. Kawasaki Rail has yet to respond to emails from reporters.

More from the Safety Commission: "the fourth axle of Railcar 7200 was out of compliance with the 7000 Series specifications for the wheel and axle assembly;...similar defects found in (other) 7000 Series railcars...prevalence of this defect throughout the fleet is unknown @wusa9 https://t.co/pLFQhL7wiY

At the Silver Spring station, Norma Johnson waited for her wife after getting messages from her in the evening about the cramped commute.

'It’s a mess," she said. "Normally, if you’re on there and these trains aren’t running the way you expect them to, it can really jam up your whole day. It should be a priority for local officials. Get the trains running.”

Other Metro riders, like Alvaro Maldonado, had to change their schedule for the day as a result of the long wait times.

"I went on the app to try and map the trip I was going to take and it was going to take about an hour and a half so I just decided to walk," he said. "Today, I didn’t have a specific schedule so I was okay but tomorrow when I have to go to work, I can’t take the Metro. I have to find other options.”

Maldonado and many others voiced frustration at the situation.

He wondered how such big mechanical problems with the train cars went unannounced to riders for years.

"It is amazing that the budget they have and how expensive it is now to make trips that they don’t get these things fixed or taken care of," he said.

On Monday, he believed the analysis of the issues with Metro trains could take at least "a couple of weeks" as investigators check over every train.

"As soon as you have a certain level of problems, you need to take them out and inspect all of them. That’s an operating procedure in any case,” Wijesekera said. "It will take a couple of weeks. Every single rail car will now be certified if they cannot find any defect at all.”

D.C. Public Schools posted on social media that students should expect delays from the reduced rail service. Students who are late as a result of Metro delays will be marked as excused, DCPS said on Twitter.