Tuesday is the anniversary of Bijan Ghaisar's death after the unarmed accountant succumbed to the four bullets fired to his head by two U.S. Park Police officers. 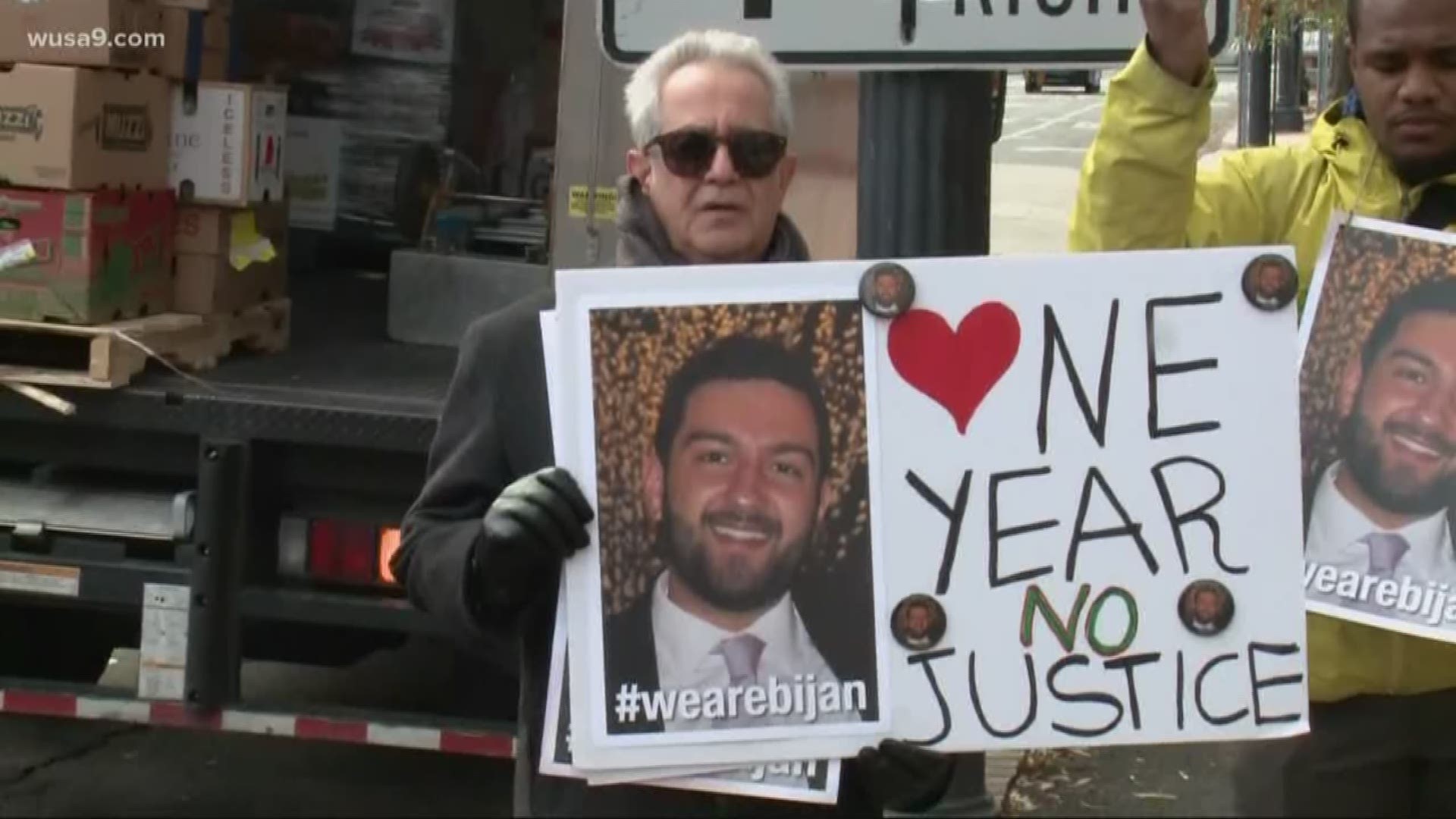 WASHINGTON -- Tuesday is the anniversary of Bijan Ghaisar's death after the unarmed accountant succumbed to the four bullets fired to his head by two U.S. Park Police officers.

More than a year later, and no charges have been filed.

The FBI has been investigating, but according to Congressman Don Byer, the "FBI has completed its investigation of the U.S. Park Police shooting of Bijan Ghaisar and referred its findings to the Justice Department. The review of any potential wrongdoing by the Park Police must be done by D.O.J., including the decision about whether or not to file civil rights or criminal charges against the officers involved."

Byer said in a statement that this was his understanding based on conversations with the FBI.

The FBI would release no information to WUSA9.

"The fact that we do not have basic information about what happened as the investigation is entering its second year with as little transparency as the first remains unacceptable. I will continue to seek answers and accountability from the Justice Department," said Byer.

Family members and friends of Ghaisar protested outside the Department of Justice.

Anguish is constant companion among the Ghaisars, the family who still have no answers for the fatal shooting of their brother and son.

"I specifically would like to know an answer for every single of the nine shots fired. Particularly those last two shots...right at his driver's side window when he was presumably unconscious going into a ditch," said Negeen.

Bijan Ghaisar, a 25 year old accountant who worked in his dad's firm, was pursued by the park police officers on the GW parkway after he left the scene of a fender bender, an accident that was not his fault.

Arlington County refuses to release the recording or transcripts of the 911 calls that came. These calls that might explain why the officers pursued Ghaisar and then pulled out their weapons each time Ghaisar stopped. The third time the officers opened fired.

That's exactly what Fairfax County Police did five years ago after John Geer was shot by a police officer. That case caused the county to do a complete about-face.

"I have a new policy since the unfortunate death of Mr. Geer," said Fairfax Police Ed Roessler. Henow releases the names of officers involved in a critical incident, within ten days, unless there is a credible threat against the officer.

Roessler is is criticizing the FBI for not releasing important information in the Ghaisar case. "This gravely upsets me....The community wants transparency and accountability from law enforcement...This harms the profession."

Roessler says not being transparent leads to a void where myths develop that there's a coverup or a conspiracy.

"I've been through that. And never again shall I put this county through this, or my community members. And the Ghaisar's family, like others through this nation, it's awful that they have to suffer through it. I just adds to the trauma," said Roessler.

It was Chief Roessler who released the dash cam video from one of his officers tailing the park officers. Video providing the only information of the shooting known so far.

"As far as I see, there is absolutely no justification on earth for killing m brother," said Negeen Ghaisar

A former FBI agent says civil rights investigations like this one, are a high priority with the FBI. She says it's not unusual for such a case to take more than a year to properly be investigated.