The viral video shows a man dancing on top of a Metro bus and jumping onto a parked car below, shattering the back windshield.

WASHINGTON — A viral video showing a man jumping from the top of a Metro bus and damaging a car in Southeast D.C. sparked comments ranging from shock to laughter. But the woman who owned the car said what happened to her is no laughing matter.

The incident happened on Sept. 18 near 23rd Street and Alabama Avenue Southeast.

The video shows a man dancing on top of a Metro bus and jumping onto a parked car below, shattering the back windshield.

Webb said her car is a total loss.

“While people was laughing, I still had to continue life with everyday things like – I had to go to work. I had to drop my kids off. I had to do the virtual school,” she said.

Webb is a 28-year-old single mother of two who is trying her best to make life better for her family.

One of her children lives with special needs and high-risk asthma.

Webb explained she lost both of her children's fathers to shootings and that she had hit a rough patch in life.

VIRAL VIDEO: Man jumps from top of Metro bus in Southeast D.C. and destroys the car of a single mother of two. @wusa9 #GetUpDC

The Southeast D.C. mom saved up her money and bought a car to help make life easier on herself, but that relief was snatched away in a matter of seconds.

“He hurt me. He hurt my kids. My kids were upset, you know, they didn’t have any understanding. It was hard to explain things to them. He crippled me,” Webb said.

Carla Webb is Asia’s mother. She wanted to do something to help her daughter.

So, she started an online fundraiser that generated more than $8,000 in just 3 days.

“I just want the donors to know that we are grateful. We’re thankful,” Carla Webb said.

Asia Webb said she had no way of replacing the vehicle because she only had liability insurance. A full-coverage policy was out of her price range, she said.

She added that she also filed a claim with the Washington Metropolitan Area Transit Authority (WMATA), but the request to fix her car was denied

Webb said the kindness, love, and outpouring of support she is receiving from strangers online will help her buy another car and move past what happened in the video.

Despite the unfortunate incident, Asia told WUSA9 she is not holding anger in her heart against the man who destroyed her car but hopes he gets the help he likely needs.

At last check, the man in the video has not been identified or arrested. 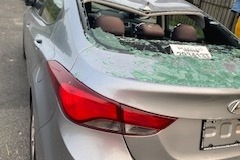 Victim of Car Destroyed by Metro Bus Passenger, organized by Carla Webb
Asia Webb, a 28 yr old, DC Resident and single mom of two children, Lauren and Lucas, who is special needs and high risk with asthma and unable to utilize public transportation. The children's father is deceased due to gun violence.